Home 2020 Montaigne: “A relationship is… having to compromise the things that are worth compromising” 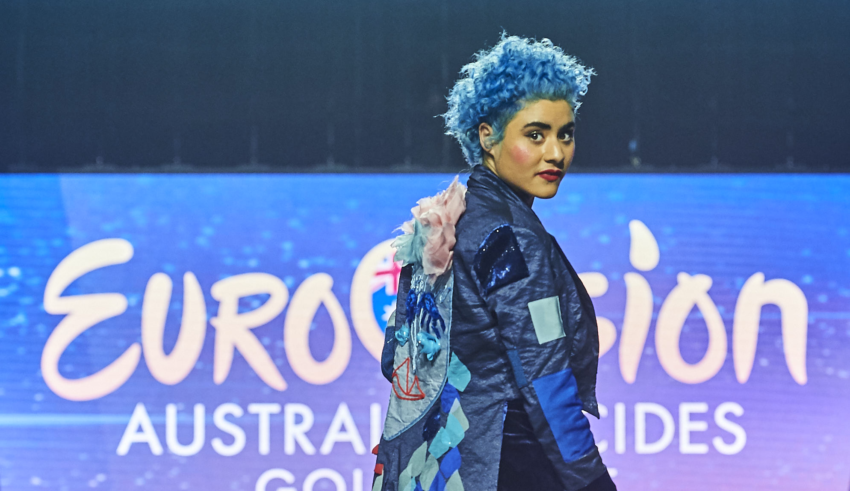 In our next interview from Australia, we speak to Montaigne ahead of tonight’s jury final, and tomorrow’s live show!

24-year-old art pop auteur Montaigne is the daughter of a professional soccer player, and spent her childhood training to follow in her father’s footsteps. She always saw music as something she should pursue as a hobby, rather than a career, but after recording an original song to submit as an application for a sports scholarship, she liked the sound of the recording so much that she uploaded it to “triple j Unearthed”, a website for unsigned Australian artists to post original music. The song got picked up by a radio station, became a hit, and led to her debut album and an award for Best Breakthrough Artist in the Australian Recording Industry Association Awards in 2016. Montaigne will be performing 9th in the running order of Australia Decides, with the song “Don’t Break Me”.

Hi Montaigne, thank you for taking the time to talk with us today! What made you decide to compete in Australia Decides?

So is that how your songwriting partnership came about with DNA (David Musumeci and Anthony Egizii, the songwriting duo who composed previous Australian entries “Sound of Silence”, “Don’t Come Easy” and “We Got Love”)?

Kind of, yeah. So they’re Sony-contracted, and I’m with Sony, so it was like “Hey, why don’t we jump on with them?”, and that’s what we did! It was good. I wrote with someone else as well, not Sony-related, but this ended up being the song that was done and was good and we all liked.

What is your favourite lyric in the song?

I never thought about this until I did a radio interview yesterday where the guy said “[the lyrics] “Isn’t love a compromise, two people trying to keep the fire burning”, that’s really… true”, and I was like “Oh, yeah, I get that”. I mean, I know that, but I’ve dealt with the song and I’ve got it all out so I’m not thinking about it any more. I’m just singing it. I’m on autopilot to an extent. I think that is a lesson I’ve learnt: I’m freshly in a committed relationship, and I always had friends and certain cultural institutions around me telling me, “In love, you just find someone who is good for you, and it’s easy, and you’re in love, and that’s forever”. And I’m starting to realise, a relationship is a union of two probably markedly different people, and trying to navigate and negotiate those differences, and oftentimes having to compromise the things that are worth compromising. The song is about the failure of two people to do that with each other, and so there is a breakdown.

Yeah everything’s blue. It’s me and five dancers, all ladies and it’s just a frenetic, dramatic tousle of dance.

Do you have much dance experience? How did you find working with choreographed dance steps?

I like to dance. I really enjoyed it, I am a mover. My whole stage thing when I tour is all movement, so it was nice to be reigned in a little bit, to be told what does and doesn’t look good, I think that’s very useful and valuable.

Do you have any rituals or good luck charms for before you go on stage?

No, I don’t think I have one for this. Usually when I’m touring with my band, we all do a “Mighty Ducks” quack before we go on stage.

What do #YOU think of Montaigne’s song, “Don’t Break Me”? Let us know your thoughts in our forum HERE, in the comments below, and on social media!