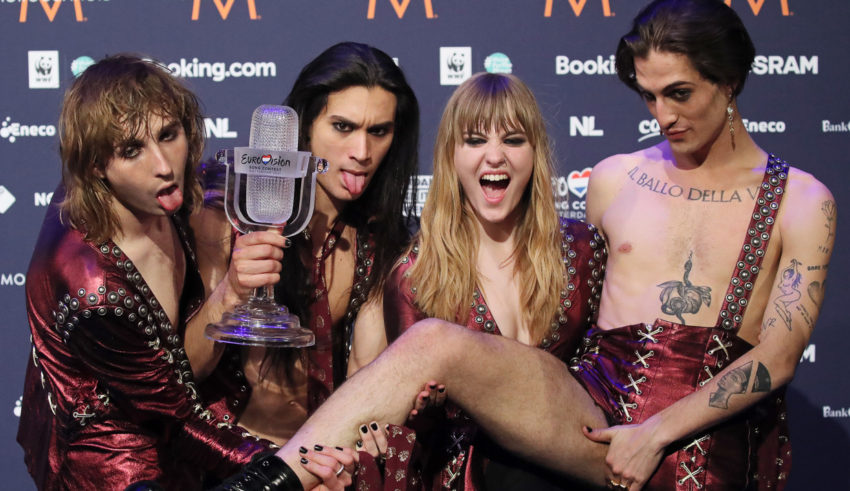 Given the momentum behind rock band Måneskin after their winning Eurovision 2021 with “Zitti e buoni” for Italy, it was only a matter of time before they would the crack the main singles charts of the United States, the Billboard Hot 100.

After three weeks cantering up the Hot 100, Måneskin finally breached the hallowed Top 40 of that chart with their cover of The Four Seasons’s “Beggin'” landing at Number 35.

It is also only a matter of time before their “I wanna be your slave” joins “Beggin’,” given that “I want to be your slave” has performed spectacularly on Spotify, iTunes, and YouTube. Typically, sites such as those act as a predictor for the more industry-oriented Billboard charts.

While Måneskin introduce themselves to the rest of the world, they continue to consolidate their fandom at home. Their Italian concert dates sold out quickly, but earlier today the band announced a new July 9, 2022 concert at the Circus Maximus in Rome, Italy.

Tickets at this iconic location will be available for sale starting tomorrow morning at 11 a.m., CET. If you want a ticket, it is highly recommended you pounce as soon as the tickets become available as their tour is shaping up to be the concert series of the summer 2022.

Italian dates are all sold out. We’ll play a new special gig in Circo Massimo next summer. Tickets available from tomorrow, 11am (CEST) 💘 pic.twitter.com/ST3wHVNF2K

According to Duncan Laurence, loving you is a losing game, but it is also a long game. Ever since his Eurovision 2019 winning ballad “Arcade” entered the Billboard Hot 100 at Number 99, “Arcade” has slowly, but surely, swum up the charts.

For those curious, Korean boy BTS’s “Butter” is currently Number 1, returning to the summit after they were displaced by another song of theirs, “Permission to Dance.”