Home 2020 LITHUANIA: The Fandom is Nigh – A recap of the first semifinal of Pabandom is naujo! 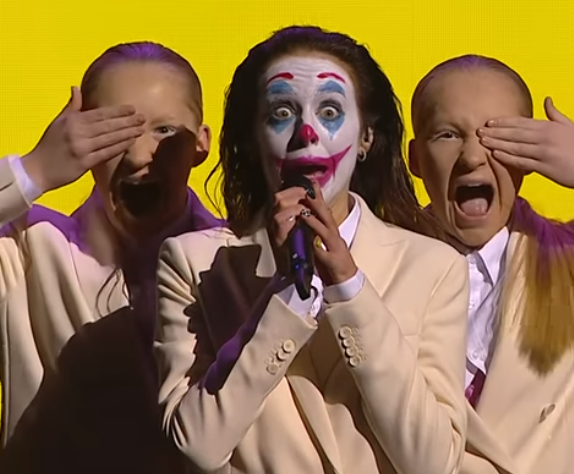 As many of you know, the Lithuanians are holding the aniversary edition of their national selection Eurovizijos Atranka this year. The 2020 edition, christened “Pabandom is naujo” (“Here we go again!”) for the occasion has completed its Heats Stage and has now moved on to the semifinal. Ten songs, four qualifiers. Here’s a recap of  what happened, in chronological order.

KaYra opened the semi with her frivilous upbeat preppy pop song. She substituted her pink overalls for a cream-coloured suit. She performed wearing full Joaquin-Phoenix-in-Joker-style make-up (see: the VC clip of Alligator where she does the same) giving the song a funny, if lowkey disturbing undercurrent. Near the end, KaYra wipes off her make-up and gets the audience to cheer for her during the final chorus. Overall, a strong performance.

Placement in the semifinal: 3rd (ADV)

Viktorija’s performance was very similar to the one we saw in the heat. The main difference between this performance and her previous one is that she added a verse and chorus in Lithuanian, upgrading “The Ocean” to a bilingual song. The ocean sound-effects in the soundtrack are also more pronounced, making the song much more immersive than before. Viktorija delivered vocally as well, but the jurors were less entheusiastic and locked her out of the finals.

Placement in the semifinal: 9th (DNQ)

The sisters donned darker costumes for their semifinal performance. This live rendition of “Namu dvasia” was quite livelier than the previous one, but the sister on the right missed a few notes in the process. It was definitely a fun, quirky performance, but in strong semifinal, Baltos Varnos came just short of a spot in the finale.

Placement in the semifinal: 5th (DNQ)

Ruta Loop was one of tonight’s fringe qualifiers. The low-fi synthpop queen took the stage dressed in white and with a more polished choreography than before. While not drastically different than her previous effort, Ruta came off as more determined this time and it showed. “We came from the sun” is starting to take shape as an entry that could qualify from a Eurovision semifinal and win hearts all over Europe as well.

Placement in the semifinal: 4th (ADV)

After nearly everyone lambasted Gabrielius for his choreography and dress sense, Gabrielius took the stage… wearing another questionable outfit, his hair in a bob, doing the same enthralling knee swing with his backings. Oh Gabrielius. Anyway, good on him. Nobody should buckle under peer pressure. The staging was largely the same, but this time Gabrielius used the backdrop to create a disco vibe. The vocals were once again flawless. It stood no chance, but it’s better to end on a high being *yourself* than being curbstomped into conformity, right?

Placement in the semifinal: 8th (DNQ)

If we take THE ROOP under the loep (lol this play on words is lost to anyone who doesn’t know Dutch but w/e we’re going to Rotterdam, now’s the time to learn!), I would say their performance was slightly weaker than last week’s.  Vaidotas’s substituted his elephant trousers for a fashionable black outfit, which made  overall performance slightly less funny than it had been before. Don’t worry – all the staples (the choreography, the dope soundtrack, the lights & shadows spiel) were all present and as good as ever. The audience agreed, advancing “On fire” with a massive amount of votes.

Placement in the semifinal: 2nd (ADV)

Kristina Jure faced a lot of backlash from the fan community, and well… read our reviews for our opinions on the matter. To her credit however, Kristina did give it her all, singing well, but I don’t think it would be a stretch to say she found herself slightly outclassed by nearly every other entry in this glorious semifinal. None can do!

Placement in the semifinal: 7th (DNQ)

Alen Chicco added low-fi elements to his soundtrack and updated his styling, directing himself away from discount David Bowie into a more unique Alen aesthetic. The result was a performance which felt *distinctly* more genuine and powerful. Being in the stronger of the two semifinals made “Somewhere out there” hard to sell however, but at least Alen went out with near flawless vocals and miming.

Placement in the semifinal: 6th (DNQ)

A staple in many Atranka’s, Aiste is the only one in the semi to not feature a major change. Not that she really needed to. This was a pretty good vocal performance (battling both the wind machine and that dastard English language simultaneously), all things considered and as dated as I personally may find “Unbreakable”, she is a competent performer for that type of song. The juries agreed, placing her first, making her the winner of the first semifinal.

Placement in the semifinal: 1st (ADV)

Near the end of the evening the jury and televoting results were revealed. The jury placed Aiste first and put Viktorija last. In the televote, THE ROOP scored a monstruous 5K televotes, over Aiste’s impressive (but paltry by comparison) 2.5K. Gabrielius, who finished last in the televote had to content himself with a mere 500.

This gave us the following scoreboard:

This evening has established both Aiste and THE ROOP as possible contenders for the right to represent Lithuania in the Eurovision Song Contest. Next we will see whether Monika Marija and Moniqué (the winners of the first two heats) may contend alongside them. See you until then!

How about you? What did #YOU think of Lithuania’s semifinal? Let us know in the comments below, on social media or on our message board!!