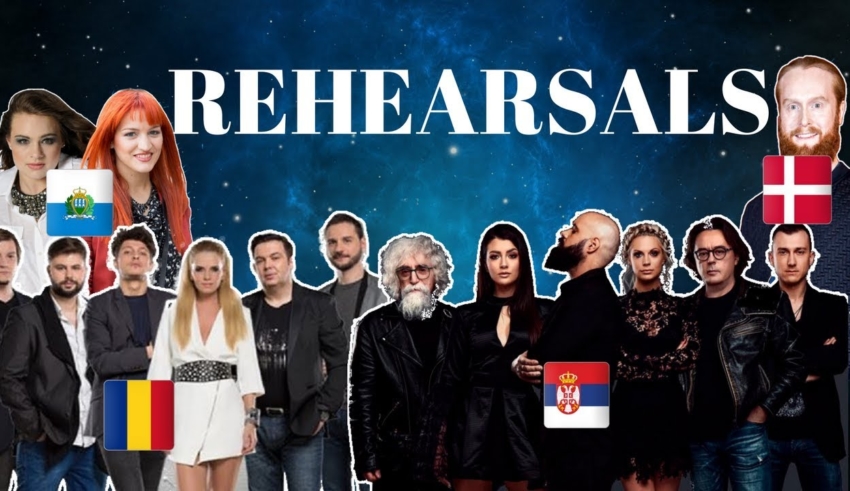 After a short break it was time for the second batch of semi-final two rehearsals. Romania, Serbia, San Marino and Denmark went up on the stage again to have their second rehearsals. There were some changes in the performances, camera shots and wardrobes, but #YOU can read all about it in the individual reviews in this article so don’t worry! Of course, the mannequins are back and the performance is the same as it was during the first rehearsal, as are the outfits. There is not much to say about this in terms of changes and improvements, but the vocals are on form once again from Cristina Caramarcu. The purple dress for Cristina and the masks and white costumes stay for the performers, and the mannequin challenge stays. Will it be enough for Romania to continue their qualification streak? We will have to wait and see. The Serbian crew have decided to change their costumes for the second rehearsal. Most of the people here in the press centre find these more suitable for their performance on Thursday night. They all vocally sound near-perfect so there shouldn’t be any worries about that on the night, but whether the choreography will exemplify the performance’s message remains to be seen.

SAN MARINO – Jessika feat. Jenifer Brening – Who We Are The biggest change here comes from the messages that the far-left robot is holding. After a fan poll online run by the Sanmarinese delegation they are now saying “Justice for Valentina!”. I also have some concerns about their vocals, but this is a fun performance and a colourful and creative one. The camera work is now very effective and needs no further fixing. While not many would expect San Marino to qualify we certainly are thankful for their fun performance. They wanted a blizzard, but I’m not sure if they got it, as it only seems to be a light dusting of snow. Rasmussen and his Vikings are owning the stage with their sails and vocals! The backdrop still carries the blue nautical theme we are all familiar with by now. It was such a powerful performance that it would be such a shame if it doesn’t qualify, but I don’t think Denmark will need to worry about this.