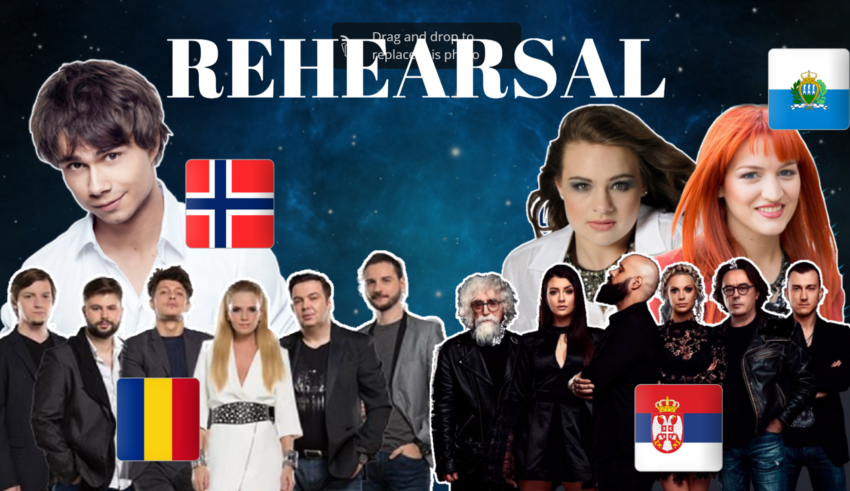 We are live from Lisbon for the third day of rehearsals and it was the turn of the second semi-finalists to take to the Altice Arena stage. Norway’s returning champion Alexander Rybak kicked off the day, with other performance from Romania, Serbia and San Marino. But how did they get on today? Read on for our reviews!

If #YOU need a more in-depth analysis of the rehearsals, make sure to like and subscribe to us on YouTube HERE to be notified when we begin our live streams!

🇳🇴 NORWAY – Alexander Rybak – That’s How You Write a Song If you saw the performance from Melodi Grand Prix then there will be nothing to surprise you here, but Rybak still has his natural stage charisma which I’m sure will charm the audience onto his side. The stage is lit in flashing pink and blue hues. On his second run there are some in-ear and camerawork problems but on the whole the performance is a strong one once the crew iron out the kinks. Some additional heart graphics appear on stage during the bridge of the song and the final run sees the addition of sporadic fireworks and sparks at the song’s key moments. I feel like some of the intimate feel of the national final has been lost on the big Lisbon stage however. Romania’s The Humans are channelling their inner DJ Bobo with their anthemic performance! Vocalist Christina Caramarcu wears a purple dress and has a flawless vocal performance, lifting this song to the stadium rock levels it needs. The guitarists Alexandru Cismaru and Alin Neagoe stand with their backs to the camera in the beginning with masks on the back of their heads, with dozens of mannequins wearing masks strewn across the stage. Christina then proceeds to waltz around the stage in between the rows of figures before the ‘money shot’ of a big note. The final shot showing the crowd of people on stage really works well with the performance and its message. The performance starts off with all three of the female singers standing in a row with exaggerated hand movements, ahead of a dark golden backdrop. The ladies are wearing flowing grey dresses, with the lead male singer Mladen Lukić in black alongside the rest of Balkanika. There is a lot of choreography between the three female leads and Lukić, but it doesn’t seem to have much sense or reasoning behind it. When the beat kicks in to the song the stage is awash with swathes of blue light, and the performance alternates between the two colours intermittently. It looks a little unclear at the moment so I’d have to say that the Beovizija performance was a lot more mystical and exciting to me.

🇸🇲 SAN MARINO – Jessika ft. Jenifer B – Who We Are How cute is this performance! San Marino once again bringing their microstate charm to the Eurovision stage with a quarter of dancing robots, including one that holds signs saying “I’m not your robot” and “Will you marry me?”. The stage is colourful in the chorus but not to an overpowering degree, and Jessika and Jenny B have a charming prescence on stage. I’m not convinced this will be in the final but it’s certainly a memorable performance!

Come back soon for reviews from our next batch of rehearsals; Denmark, Russia and Moldova!

What do #YOU think of the first rehearsals from day three? Share your thoughts on this year’s rehearsals with us on our forum HERE or comment below!