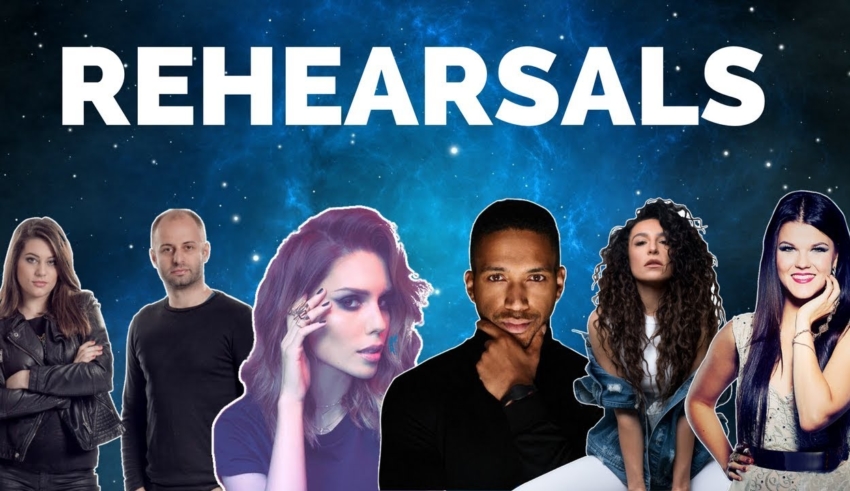 Yesterday evening we saw five more countries rehearse for the second time. Did #YOU miss the rehearsals of (FYR) Macedonia, Croatia, Austria, Greece and Finland? Have no worries, as #YOU can catch up on our live stream from yesterday and also get all of the details from these rehearsals? Macedonia’s second rehearsal reveals something to us that we didn’t notice before; the first ten seconds of the performance are pre-recorded! Lead singer Marija Ivanovska stands in her pink outfit at the edge of the stage singing into the camera and gesturing over to her bandmate Bojan Trajkovski, before seemingly achieving the impossible and teleporting next to him after a static jump cut. It’s a really nice effect that grabs the viewer’s attention straight away. Halfway into the song Marija takes off the pink outfit and instead wears a grey jumpsuit before performing with the backing dancers and Bojan. There are some very nice camera shots with this one and the stage bursts into colour in the last chorus but in this semi-final I fear this performance may be slightly too ordinary to wow the audience. Franka is once again alone on the stage and uses her charm and charisma to propel the performance for three minutes. A megaphone-effect vocoder has been added to the spoken word section and a wind machine completes the stereotype for solo Eurovision performers. The backdrop is still in various colours which surprisingly blend well together; oranges, light blues and reds. It’s a good performance still but I would just hope that she had someone extra on stage with her and I worry it may be a little too flat to stand out and grab points. They do have some help in this semi-final of course…

AUSTRIA – Cesár Sampson – Nobody But You Cesár Sampson, in all fairness, has had a bit of a disaster run this afternoon, albeit through no fault of his own. Only two complete runs for Austria as technical issues with the lift hamper each attempt. Once Cesár is able to put in a run though it is definitely worth it, the lift provides some wonderful shots from below, where Sampson is bathed in white light to complement the gospel feel to this entry. His vocals are on point including the special high note and the camera angles are much more polished this time around. Austria just need to cross their fingers that the lift will work on the live show. We were very curious to see this one considering the supposed issues that Yianna and the Greek delegation had with their first performances, but with three runs today we were hoping for more. Yianna is once again in a flowing white dress with the wind machine blasting which adds to the dramatic effect of the song, and her hand is painted blue. She very dramatically controls the lights with her sweeping arms during the ethnic instrumental but we were promised something extra and fire so it seems a little flat. I think Greece need to play on the dramatic moments in this entry, otherwise there may be some dissapointment on Tuesday… Saara Aalto, Eurovision’s latest darling, doesn’t change much for her second rehearsal but she is already bringing a lot to the Eurovision stage! She now spins around 360 degrees and is shown in white lighting which works much better than the darker staging at the start. The pink and blue lights do return to the performance where the rest is as normal. The sparkle flares that Saara holds up at the end add to a big crescendo that will stick in the mind of the viewers for sure!

What do #YOU think of last night’s performances? Share your thoughts with us on our forum HERE or join the discussion below and on social media!