Home 2017 Latvia: Lauris Valters “I wrote this song to my beautiful and special girlfriend” 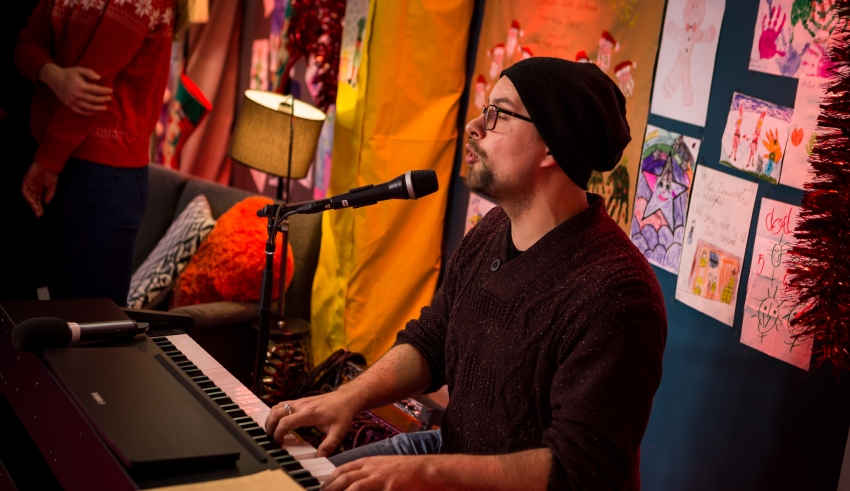 Tomorrow, the first heat of Supernova will air. 4 songs will chosen for the next round. Lauris Valters is one of the artists whom is selected and today he found some time to chat with us about their upcoming participation in Supernova.

Hello!Well, I’m 32 years old latvian and all my life I’m in and with music! My first musical inspiration was my father, who is headmaster in secondary school, but also is composer ( he has composed more than 350 songs) and when I was young boy I really enjoyed his playing and singing ! At the age of 6 I started to play piano and learned it in music school for 8 years. Also I sang in mens chorus starting at 14 ! And then I found some guys in school who also wanted to play and we started all that thing, we established our band called “ēnas” (in english it’s “the Shadows” ) ! So than how it usually moves on – first concert, first recorded song, first fans, first … ! there were lot of changes in bands stucture through the years , but I can say one thing – together with my childhood friend, guitarist Jānis we played in band for 12 years! It all ended in 2012 and now I’m moving on by my self!

Your song that you will be presenting for Supernova is “Magic Years”. What can you tell us about the song?What was the inspiration for the song, and did you write it specifically for the national final in Latvia and Eurovision?

About this year’s song “Magic Years” , this song is about this special, magic time when we are living with great people who are beside us, and about most important thing – Love! I wrote this song to my beautiful and special girlfriend and fiancee Vita!

I have lot of great songs and I want to show them to audience, Eurovision Song Contest is the perfect opportunity to introduce myself to audience and to move further!

I think that Eurovision song contest is a great opportunity for artist to represent their country and to make a big breaktrough in their careers!

About previous year’s songs .. well, Brainstorm “My star” 2000 , because it’s great song and it was first year for Latvia in Eurovison finals , Valters & Kaža “War is not over” , it was good song and performance, PER “Here we go” 2013 (because I was there .. no, but if seriously it was memorable performance and powerful song) and Aminata “Love Injected” !

I really dream to perform … it’s Barcelona , La Sagrada Familia , because I adore it !

Whom is your personal musical stars that follow a lot ?

Biggest success so far well, I have released album, I have released several well known songs in my country Latvia! I have played  concerts in biggest latvian festivals, clubs, churches! 4 years ago I was togeather with band PER and we represented Latvia in Eurovison final in Malmo, Sweden! And 2 years ago my written song “Life Lines” was in Latvian Supernova semifinal , performed by Rihards Saule!

I really enjoy the sports, lot of sports, I’m a fan of basletball, ice hockey, football, bobsleigh, tennis and more and more! I play basketball every week!

With my family! Because it’s time for my beloved ones!

You can listen to Lauris’s entry “Magic Years ” on this link below :-