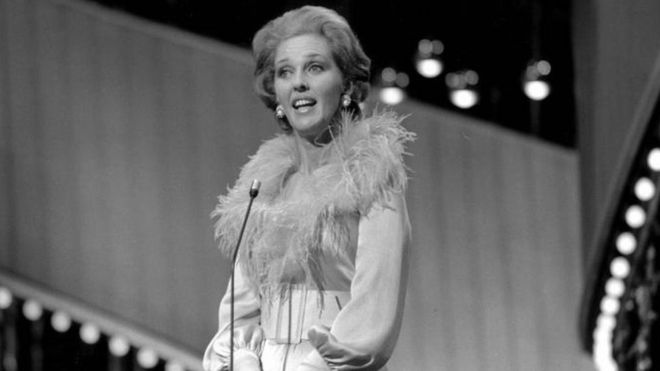 Katie Boyle, perhaps most famous as the four-time host of the Eurovision Song Contest for the United Kingdom, has sadly died at the age of 91, it was announced this evening.

The TV presenter and personality, born in Florence in Italy as Caterina Irene Elena Maria Imperiali di Francavilla, began her career as a model in the 1940s before moving into acting in various films in the 1950s. It was in the late 50s and early 60s that Boyle began to make a name for herself however, acting as a continuity announcer for the BBC before joining the panel on programmes such as What’s My Line? and Juke Box Jury.

It was her involvement with Eurovision that made her iconic across Europe, with four hostings under her belt in 1960, 1963, 1968 and 1974 as the United Kingdom regularly hosted the competition. She was also a special guest at the Birmingham contest in 1998, hosted A Song For Europe in 1961 and attended Eurovision fan conventions in the late 80s and early 90s.

RIP Katie Boyle, we at ESC United would like to send our sincerest condolences to her family and friends at this tough time.

#YOU can share your thoughts on this story on our forum HERE and join in the discussion on social media.