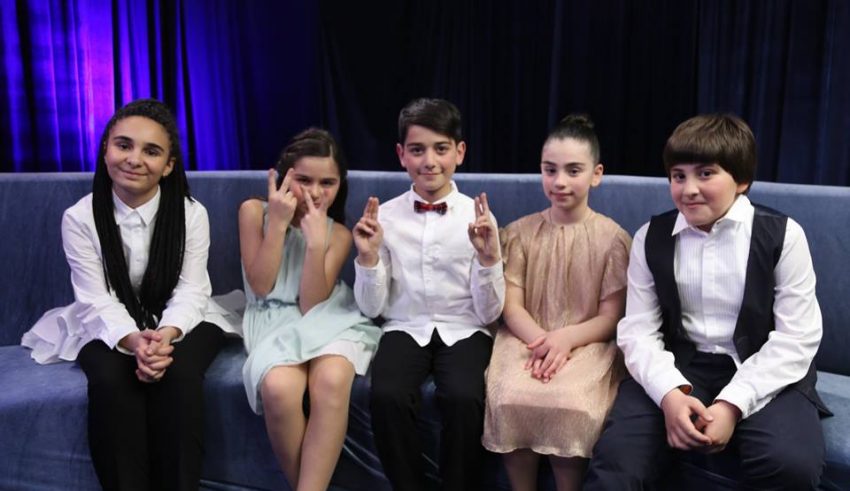 The hills are alive with the sound of Georgian children trying out for Junior Eurovision 2019 in Gliwice, Poland! Last week, five young contestants were put through their paces in an “Oliver!” themed first episode of რანინა (Ranina), and this week, another five young aspiring Junior Eurovision artists were put through their paces in individual duets with famous adult Georgian singers, this time on selections from the legendary Rodgers and Hammerstein musical “The Sound of Music.”

Four “tours” of different themes will be completed by all ten contestants over the span of eight weeks. The five contestants with the best scores accrued from the three member jury (David Evganidze, Beka Gochiashvili, and Salome Korkotashvili) will move on to the semi-finals, and from there three finanlists will be selected for the final where the winning performer and internally selected song will be chosen. Georgia remain the winningest country at Junior Eurovision since its debut in 2007, capturing the crown a record three times in 2008, 2011, and 2016. Georgian Idol was a ratings blockbuster for Georgia Public Broadcasting’s TV1, and will be hoping Ranina continues that trend over a similar qualification process.

First up, 12-year-old Giorgi Rotiashvili paired up with Eldrine vocalist Sopho Toroshelidze on “The Hills are Alive.” Toroshelidze and Eldrine placed 9th at Eurovision 2011 with “One More Day,” Georgia’s joint best performance at the adult version to date. And audiences were rapturous in applause as Giorgi led the number impressively.

10-year-old Tekla Chanagava, the only contestant not from Tbilisi (she hails from the Black Sea resort city of Batumi), was paired with singer and trained economist Gaga Abashidze on “Sixteen Going on Seventeen.” Given the age disparity between the two singers, this could have gone wrong in so many ways that only Georgia seems to know how to do, but the effect was sweet and Abashidze knew to take a backseat and allow Chanagava to shine.

10-year-old Keta Akhalbedashvili sang “My Favorite Things” with Sopho Khalvashi. Sopho needs no introduction as she performed Georgia’s first ever entry at Eurovision 2006 with “Visionary Dream,” which placed a strong 12th.

Rounding out the selection, and the final contestant introduced, was 13-year-old Ana Berishvili supported by Nodiko Tatishvili, who represented Georgia at Eurovision 2013 with Sopho Gelovani on “Waterfall.” Gelovani herself performed last week with 9-year-old Barbara Imnadze. Berishvili and Tatishvili performed “Climb Every Mountain.”

Tune in every Sunday at 20:00 to see how Georgia’s young hopefuls perform the numbers asked of them. Given Georgia’s seriousness in the Junior Eurovision contest, Ranina will be given the same prestige as that afforded to Oto Nemsadze and his Eurovision 2019 entry “Sul tsin iare.”

In other Junior Eurovision news, Wales announced that they will return to the Junior Eurovision fold in 2019 despite Manw’s last placed finish in 2018 with “Perta.” A nation that boasts world class singers such as Tom Jones, Shirley Bassey, Bonnie Tyler, Charlotte Church and Skindred should have no shortage of talent ready to try again. It’s not as if Junior Eurovision is an arena where, to quote Skindred, “nobody gets out alive.”

The terms and conditions of the “Search for a Star” contest, the same format used to send Manw, were posted online at Junioreurovision.cymru and contain the scheduled selection process in detail. Applications can be submitted by April 18, 2019, and the open audition process will be conducted in several Welsh cities on April 24, April 25, and May 5. Call-back auditions will then be held on May 4th and May 6th in Caernarfon and Cardiff, respectively, for those who impressed in the open auditions.

Up to 20 entrants will progress and receive mentoring, and 12 will be chosen at the Semi-Final in Swansea on June 29, 2019. After more mentoring, six will be selected for the Juniorvision Cymru Final in Llandudno on September 24, 2019.

What do #YOU think of Georgia’s young aspiring artists now they have all been introduced? Are #YOU glad to see Wales back to battle for glory after last year’s outing? Comment in our forum, on social media, or in the comments below.