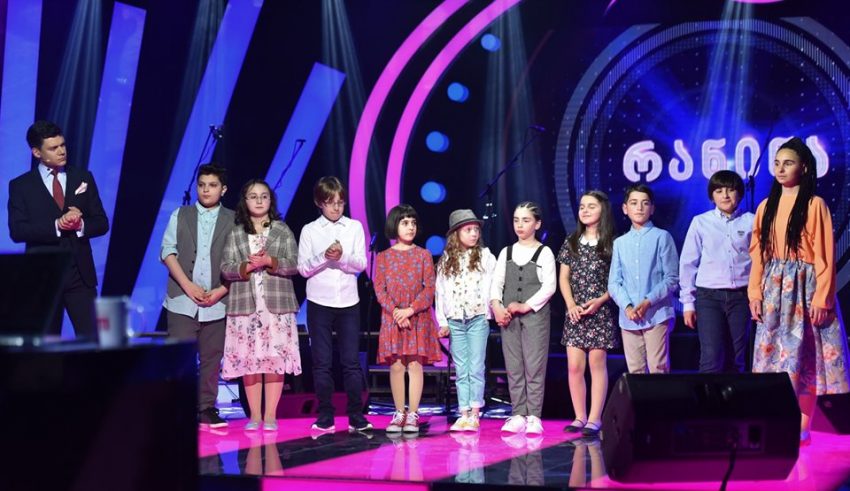 The first cut is always the cruelest, and five young aspiring singers hoping to represent Georgia at Junior Eurovision 2019 in Gliwice, Poland, were eliminated, and five progressed into next week’s Semi-Final Round.

This week’s episode of Ranina, the eighth after four two-day tours of musicals, Shavnabada, Quintessence, and a capella, was the first to see contestants eliminated. Ana Berishvili, Giorgi Rotiashvili, Nika Petriashvili, Anastasia Garsevanishvili, and Keta Akhalbedashvili moved on to Semi-Final stage of Ranina, Georgia’s reality show being used to select its winner and song for Junior Eurovision 2019.

Four “tours” of different themes have been completed by all ten contestants over the span of eight weeks. This tour’s judges are head judge David Evgenidze and guest judges Sopho Khalvashi, who was Georgia’s first ever Eurovision entrant in 2007 with “Visionary Dream,” and Nodiko Tatishvili, who represented Georgia at Eurovision 2013 with Sophie Gelovani and “Waterfall,” judging the contestants in points out of ten on vocals, artistry, involvement, and performance. Georgia remain the winningest country at Junior Eurovision since its debut in 2007, capturing the crown a record three times in 2008, 2011, and 2016. Georgian Idol was a ratings blockbuster for Georgia Public Broadcasting’s TV1, and will be hoping Ranina, the format also used for Georgia’s Junior Eurovision 2018 entry “Your Voice” by Tamar Edilashvili, continues that trend over a similar qualification process.

Sadly, this week of Ranina marks the end of the road for Barbara Imnadze, Elene Ivanidze, Giorgi Gordadze, Levan Eloidze, and Tekla Chanagava. But only for Junior Eurovision 2019. As the likes of ZENA have shown, not making it to represent your country at the junior level does not stop you from successfully stepping up for the senior level.

Last week, the Tbilisi Children’s Chapel provided the backing vocals to the contestants, but this week it was the Gori Girls’ Team doing the duty. And first up, Tekla Chanagava gave it her all with a rendition of Katy Perry’s “Roar.”

Giorgi Rotiashvili was social media favorite this week with his take on “Moon River,” the Henry Mancini composed song from the 1961 classic-of-sorts “Breakfast at Tiffany’s” (ignore Mickey Rooney’s racist gags, remember George Peppard’s suave pre-alcoholic romantic). An odd choice for a 12-year-old, but it worked, and he confidently nailed it. After Ana Berishvili and Nika Petriashvili have been dominating the talk these past few weeks, this was the perfect time for this young lad to subtly yet not-so-subtly let the competition know what a threat he is.

A quirky pick also helped Keta Akhalbedashvili with her version of the 1940’s jazz classic “Java Jive.” A 10-year-old singing about her love of coffee may be odd, but Keta has handled everything asked of her with aplomb, and this song in particular should give you a clue why she was a shoo-in for the Top Five.

And fourth up, and you have to agree with Evgenidze and Tatishvili putting their hands up in wonderment, was was Ana Berishvili with her take on John Newton’s classic hymn “Amazing Grace.” Berishvili has impressed with her cool, steely-eyed yet confident performances that belie her 13 years of age. She would be a phenomenal pick for Georgia, and along with the slightly cockier yet equally talented Nika Petriashvili, we will see one hell of a battle in the final (though don’t count out Rotiashvili).

Last up, Levan Eloidze gave us his take on John Lennon’s “Imagine.” Though a fine take, the song does not lend itself to being a platform to strut your stuff as a vocalist (especially following Berishvili). But at only 11 years of age, his elimination is by no means the end of the line and he can come back stronger.

The remaining five contestants will perform in the Semi-Final next week at 8 p.m. on TV-1 Georgia, where three will be selected to move on to the Final. You can view Ranina live on the show’s Facebook page.

In other Junior Eurovision news, it was reported earlier this week that Malta’s representative at Eurovision 2019, Michela, will receive backing vocals from none other than Junior Eurovision 2015 winner Destiny Chukunyere. Michela’s “Chameleon” has been receiving rave reviews after two rehearsals, and adding one of Junior Eurovision’s most well-known and accomplished winners will only improve Malta’s chances of landing a first win in the adult version of Eurovision.

Chukenyere’s soulful and powerful “Not My Soul,” with colorful backdrops and Chukenyere’s assured channeling of soul singers decades her senior such as Aretha Franklin, is to Junior Eurovision as ABBA and Celine Dion are to the adult version, and Malta have to feel they’re bringing a gun to a knife fight with Chukunyere backing up the already dynamic Michela, who has answered everyone’s questions about her dance moves and then some.

But are you gonna like it? Who’s to say, but ZENA dropped her official video for her Eurovision 2019 entry for Belarus, “Like It.” ZENA, formally known as Zinaida Kupriyanovich, who tried out for Belarus’s national selection for Junior Eurovision in 2015 and 2016 (coming in 5th and 3rd, respectively), has impressed during the rehearsal phases with her youthful up tempo dance track, and this official video even injects a bit of humor into her repertoire.

Apparently her hair is a result of a product named Karelia Organica, whose name is dropped at the end of the video. Will you like it? Depends on your opinion on the effectiveness of the mineral shungite. On the plus side for ZENA, endorsing a shungite based product will not get her on the bad side of Tati Westbrook.

Nevena Božović spoke to ESC United this weekend about her entry for Serbia, “Kruna.” Božović represented Serbia at Junior Eurovision 2007 with the third placed “Piši mi,” before joining Moje 3 at Eurovision 2013 with the non-final qualifying “Lyubav je svuda.”

Watch for the clenched left fist, covered in red glove and with rings and jewelry that we ask about, to emphasize and represent the power of Serbian women

And finally, everyone’s favorite workhorse Dino Jelusić dropped the video for Animal Drive’s cover of Roxette’s “The Look” on Friday. The fourth track from the Animal Drive EP “Back to the Roots,” with additional vocals provided by Rosa Laracchiuta, is the first “official” video from that release.

This release, which is meant to highlight Animal Drive’s influences, is to tide over fans until the second album is released later this year. But this EP is worth it alone, especially this unique hard rock take on Roxette’s classic. If Animal Drive’s guitarist’s pinch harmonics don’t make a brown-eyed girl’s turn blue, then nothing else will.

Jelusić, who won Junior Eurovision 2003 for Croatia with “Ti Si Moja Prva Ljubav,” has forged a career as a hard rock singer, with his touring with American Christmas rock act Trans-Siberian Orchestra and his Animal Drive group’s debut album “Bite!” garnering attention and praise. And we will continue to point out his work as it is released to highlight his incredible talent and work ethic, and the world of opportunity available to any Junior Eurovision entrant and winner who puts themselves out there and works for it as hard as Jelusić has.

What do #YOU think of Ranina’s five Semi-Finalists? Any of the five eliminated contestants #YOU think was cut unfairly? Let us know in the comments below, on social media, or in our forum.