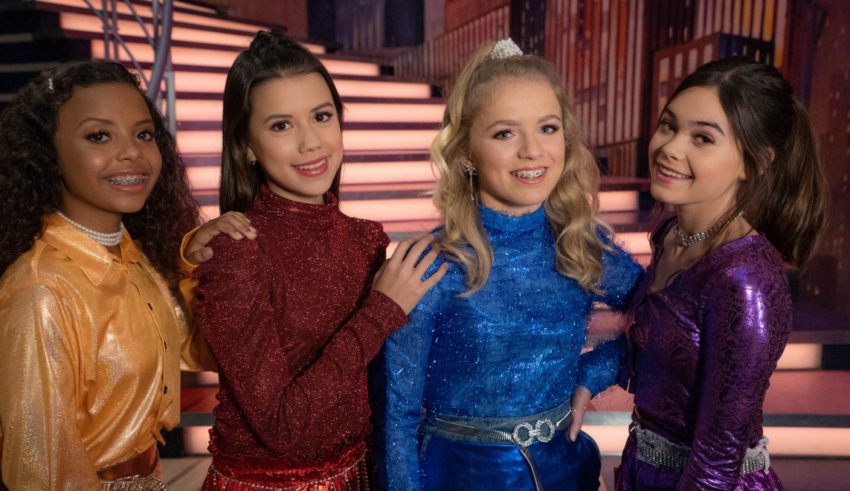 It’s 5 days to go until Junior Eurovision 2020, and we are counting down the 12 nations participating in this year’s remotely held and Warsaw, Poland hosted contest on Sunday, November 29, 2020.

Today we look at The Netherlands, one of the two Junior Eurovision originals who have been present in every single edition (Belarus being the other) since the inaugural 2003 edition.

You might blow a gasket trying to comprehend this, but Belarus has on average bested The Netherlands over the full course of Junior Eurovision. The Netherlands did win once in 2009 and came in 2nd with Rachel’s “Teenager” in 2011. Otherwise, it’s mostly been middling form.

However, their one win in 2009 was quality. Ralf Mackenbach somehow made a Dutch boy ensemble look fun and authentic despite this formula flopping at the contest several times. “Click Clack” was catchy and fun and appealed to both sides of the kids / adults divide. Mackenbach had stage presence and confidence despite being lumbered with a bad Justin Beiber haircut.

Another Dutch entry of note is Lisa, Amy and Shelley from 2007. Their 2007 effort “Adem In, Adem Uit” came in 11th, but they came back to represent The Netherlands in the adult version in 2017 as O’G3NE with “Light and Shadows.” Curiously, that also came in 11th in the Grand Final.

Femke Meinke came in 7th in 2012 with “Tik Tak Tik,” but later achieved more fame becoming the lead actress in the Dutch Disney Channel’s Just Like Me!

Stefania Liberakakis from Kisses, The Netherlands’s 2016 entry, is now a big deal in Greece. She earned rave reviews for her appearance at the Mad VMA Awards by Coca-Cola last year by performing Daddy Yankee’s take on Snow’s “Informer.” And the Alexis Bledel look-a-like of course was selected to represent Greece at Eurovision 2020 with “SUPERG!RL.” It has been confirmed that she will return to the contest to represent Greece in 2021.

Unfortunately, real life intruded to almost ruin the whole enterprise for The Netherlands (and definitely ruined it for one act in particular). Four acts were lined up to contest the final, but solo artist Robin tested positive for COVID-19 and had to withdraw. Additionally, the girl group UNITY lost one of their four members when Demi also tested positive days before the national selection final.

UNITY took it in stride and the remaining members of Naomi, Maud and Jayda were able to win with their song “Best Friends.” Though Jackie & Jane won the kids’ jury, UNITY did enough to win the adult jury (including Eurovision 2019 winner Duncan Laurence) and the televote.

Good news! Demi is back and UNITY will be present at Junior Eurovision 2020 as a quartet. As part of the usual artist bootcamp before the national selection, AVROTROS thought Demi, Maud, Jayda and Naomi would work best as a quartet and named them UNITY.

Demi (14) is from Delden, Jayda (13) is from Barendrecht, Maud (14) is from Aalsmeer, and Naomi (13) is from Heeswijk-Dinther. There is some minor controversy as they, as a group, preferred dogs to cats in JESC 2020’s artist questionnaire.

“Best Friends” is written by seasoned musician and producer Robert Dorn, who has experience at Junior Songfestival and other kids contests, including writing songs such as Max & Anne’s “Time to Party.”

Lyrically, the song mines familiar territory with its “we’re friends despite [a, b, c]” obstacles, which is often a sure-fire winner at this contest.

Connor – 9 – “Alright I’ve been on the Unity train since before the national final happened, and I’m SO excited they get to “be” a part of the contest. This is such a fun entry that also sounds so professional between the solo verses, the mini duets, and the harmonies in the bridge and choruses. Honestly, I love it! They truly have a stellar package and this could be a standout performance for the Dutch. I have a feeling that they really want to win the Junior Eurovision trophy asap, because the last 3 years have been nothing but strong entries.”

Daniel – 5.5 – “Oh those harmonies are actually quite nice. It is pretty upbeat sunny vibes. There is a lot to be proud here regarding the production. That being said, it does have a quite predictable build and exposition. It is does get carried by a heavily repeated chorus the relies on a lot of ohhh’s. Nevertheless it is a fun song that checks off a lot of the boxes for a song like this.”

James – 7 – “I know sweet songs like this grinds some folks gears, but there’s a sincerity here you can’t be mad at. It’s sweet, light pop fun. And songs about being friends is a bit of a cliche at JESC, but there’s something about the Dutch that makes you forgive the cliches. This is especially true when you heard one of them was struck down by that $#$%@ virus, but overcame it anyway to win national selection.”

Melanie – 6.5 – “After Max & Anne participates with Samen in 2018, The Netherlands finally choose the “Sweet group with a song about friendship” over the “Cool looking entry with a song about love” again! Best Friends is a friendly, bubbly and maybe even kinda cheesy song about friendship that makes you clap-along. It’s a really catchy song, but it’s just too sweet for me. But maybe this is what we need now in these pandemic times. We don’t
need sad songs, but more this kind of bubblewubbly pop! Hopefully Europe feels the same and will vote for them.”

Roy – 5.5 – “I desperately hope that they worked on the live performance because vocally it was really rather weak in places. This song also feels like The Netherlands just went to a market where they found a lot of stock melody’s and samples and just added a few of them together. Genuinely the part that isn’t the chorus could be slotted under any random travelling video and it would not be out of place. It would probably even annoy you after seeing it in the 763rd traveling video. Overall the vibe is very good and uplifting however and I could see them getting a decent amount of votes for just that. So not the best written piece ever, the live concerns me, but it is fun and it could even do well if they make the best out of it!”

Sean – 5 – “Hmm… the Dutch really seem to have a thing for boy/girl bands in Junior Eurovision, but hey, if it works! Let me just say that I’m not the target audience for this track and move on. They have great chemistry and the message is right for this contest, so that’s something positive for me at least. The mix of Dutch and English works well too.”

So much for home advantage. ESC United’s Dutch contingent (Melanie and Roy) gave it an average of 6. The Western part of the USA (Connor and James) just about prop it up to 6.42. That being said, group songs by the Dutch have recently done well and done so in a surprising manner, so don’t be shocked if you see UNITY unexpectedly show up in the Top 5.

Tomorrow, we look at host nation Poland. From JESC driftwood to crushing victors, will the hosts make it an unprecedented three victories in a row?

Do #YOU think UNITY delivers a united victory or a disarrayed mess? Let us know in the comments below, on social medi