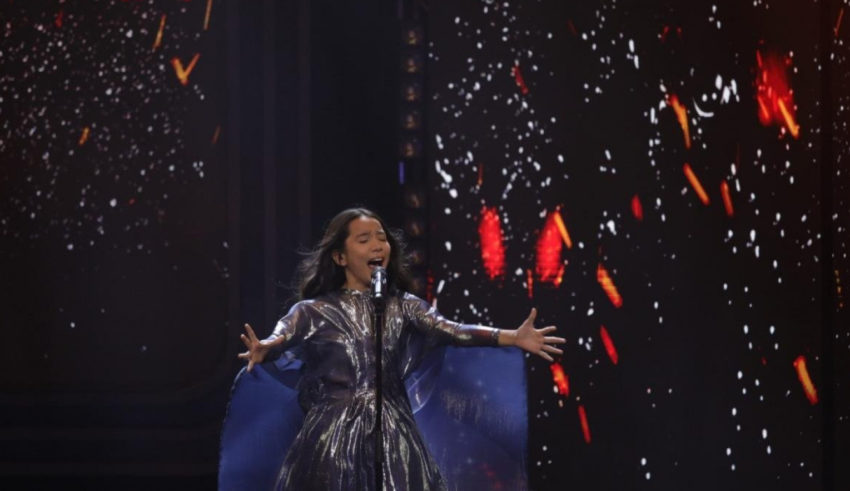 It’s 6 days to go until Junior Eurovision 2020, and we are counting down the 12 nations participating in this year’s remotely held and Warsaw, Poland hosted contest on Sunday, November 29, 2020.

Today we look at Kazakhstan, a debutante that has set the tournament alight since their debut in 2018.

Kazakhstan debuted at Junior Eurovision in 2018, with Daneliya Tuleshova’s “Ozine Sen.” She came in 6th place with a critically acclaimed entry, and such was her success she went on to the United States to perform on The World’s Best, representing Kazakhstan with “seven octave wonder” Dimash Kudaibergen. Additionally, she appeared on The Voice Kids Ukraine, and also returned to the United States and came in 6th on America’s Got Talent.

After these two, you have to feel for this year’s representative for Kazakhstan, as they have a lot to live up to.

Kazakhstan’s Khabar TV solicited cover performances and original songs from age eligible Kazakh performers and songwriters, with 30 being selected by Khabar TV to be put up to a public vote. During a two week span, the 30 was winnowed down to 12.

On September 26, 2020, the national final was held, and Karakat Bashanova narrowly edged out Ayim Mukinatova by 25.9% to 25.1% of the combined Jury and Televote. This should bode well for Bashanova, considering Kazakhstan is a jury favorite and not a televote favorite, and Bashanova’s massive edge in the televote saw her cruise to victory.

12-year-old Karakat Bashanova is from Ryskulov, a village exurb of Almaty, Kazakhstan. Her song “Forever” is dedicated to her late father. To lose her father at such a young age, especially as he encouraged her on her path in music, is a large cross to bear, but one that caused her to gravitate to her song.

As she told junioreurovision.tv, “The author wrote the exact same things that I wanted to say to my father. Also, it says “I remember those days” and I do remember everything, I will always keep the memory of my father.”

The lyricists are Ardak Yeleusiz and Abulkhair Adam. Yeleusiz is a dombra player who performed with Almas Duo, a group who performed Kazakh classics in French recently.

Connor – 10 – “I will officially go on record as being a KazakhSTAN once again, as we are not worthy of such musical mastery within a children’s singing competition. If Kazakhstan does not win the contest this year I will call the results into question because this is emotional, heartbreaking, and tragic but also magical, beautiful, and majestic. Plus Karakat’s voice is that of an angel – she can do no wrong. I think this is their year, I truly believe it and that’s why it gets a perfect score. This is a Junior Eurovision winning song hands down.”

Daniel – 9 – “Starts off quite mysterious and then transitions with these amazing visuals. Then it takes off and brings a powerful delivery early enough that you are intrigued. The thoughtfulness of the video makes me excited for what the staging will bring. It is quite a powerful package and her voice is quite crystalline. This has me rather excited!”

James – 9.5 – “We need a new gold standard. Instead of 24 karat gold, everything should be judged against 24 karakat gold. For the third year runnin, Kazakhstan has found an incredible young talent, and I have no doubt Ms. Bashanova is destined for greatness. And I feel for her having lost her father at such a young age. Pain such as this has never been addressed at this competition, but her father speaks to her through the song as an inspiration to keep on going and succeed. It’s a powerful ballad delivered by a superb young talent. The only reason I don’t give this a 10 is because Georgia’s song just sticks around my mind much more. Karakat’s only fault is that she has a rival who can craft an emotional ballad slightly better than her own crew for this competition.”

Melanie – 7.5 – “Why Kazakhstan still doesn’t participate at the adult Eurovision is a big question for me. Because they’re a welcome addition to the Junior Eurovision Family. I love that in all entries till now you really have the feeling that you listen to a Kazakhstani song with their own cultural touch. “Forever” is really a heartbreaking song with a great build. The only problem I have is that somehow it sounds a little bit shouty in the chorus. I really think
that if they made some notes shorter, the song would already be more pleasant to listen. But it still gives me goosebumps every time I listen to it!”

Roy – 9 – “This song touches me. There is some magic about this ballad. The way the chorus just hits you where Karakat’s voice glides so lovely over the melody while also giving us some power vocals. This is just very delicately done! The definite highlights are the choruses and her amazing voice, but the verses are perhaps a tad bit lacklustre. I also don’t fully understand the choices they made in the ending. They make this epic build-up in which you anticipate that one final belting note to hit it home. But then there is just an end and that is it… It is still definitely one of my top favourites though!”

Sean – 6 – “Kazakhstan seem to have a real crop of young talented singers coming through, and Karakat Bashanova is the next in line. “Forever” has haunting qualities and the video makes it clear the dramatic tone of the song and its lyrical content, but it doesn’t have the ‘moment’ that made the last two Kazakh entries special. The piano at the very end of the song is a nice way to accent the piece, but it’s too little, too late on this occasion.”

And Hot Damn Jean-Claude Van Damme, we have a new leader! Team USA (Connor, Daniel and James) was overwhelmingly Team Georgia and Team Kazakhstan, and Team Holland and Derbyshire (Melanie, Roy and Sean) poo-pooed the East again, but James’s 0.5 less score for Kazakhstan and Melanie’s 1.5 bigger score for Georgia resulted in Kazakhstan being 1 point ahead of Georgia with a stunning average of 8.5.

Tomorrow, we head to Malta, the small island that always punches above its weight in this contest.

What do #YOU think of “Forever”? Do #YOU think Karakat has what it takes to deliver victory to Kazakhstan? Let us know in the comments below, on social media, or in our forum.