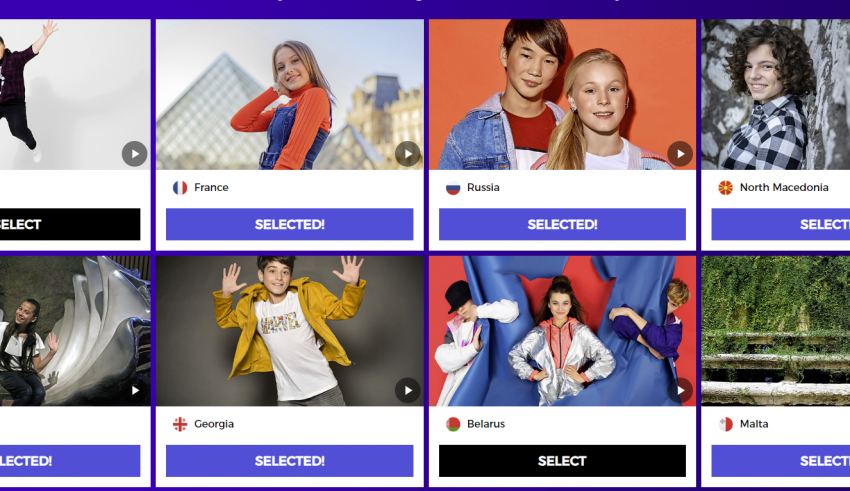 Have you been following the proceedings of the Junior Eurovision 2019? Have you got a fave you would like to support in the online vote? If the answer to that question is “yes”, then you’re in luck! The official voting lines for the 2019 Junior Eurovision Song Contest have now opened on the official website.

How do you vote?

First, you go to the official website: junioreurovision.tv. There will be a direct hyperlink to the recaps of the songs. click on it. You will be brought to the voting ballot and will be shown a recap of all participating entrants. Watching the recap is mandatory. There’s no skipping it. We all want you to make an informed decision.

Once you’ve watched it, you are directed to the voting page. Simply select 3, 4 or 5 songs you want to vote for. Click the play icon for a longer recap of their second rehearsal.

This ballot would be invalid because 6 songs have been selected.

There is no restriction to where you’re from or whom you can vote for. So yes, you can vote for your own country. If you live in a non-participating country, you are allowed to cast votes as well.

REMEMBER: you must vote for at least three different countries. Don’t act like a jingo. Support the best entries, not just your own home nation!

Voting will remain open until the 24th of November, when it will close at 15:59.

The audience vote will account for precisely half of the total amount of points (1.102 points from the jury, dito from the audience) . The points will be distributed evenly based on the percentage of votes each entry received. (If an entry got 20% of the total vote, their televote amount will be 20% of 1.102: 220)

If you’re still unsure whom to vote for – there’s no rush. Voting will reopen for another 15 minutes once every song has been performed in Gliwice-Silesia. Should you require more information however, our editor James has put together detailed reviews on every participant, featuring the personal opinions of the ESCUnited team:

If you wish to see the official recap of the live performances, click here.

What are #YOUR favourites in JESC 2019? Which country do #YOU think had the best rehearsal? Whom did #YOU vote for? Let is know in the comments, on social media or on our forum HERE.