It wasn’t all that certain that Sanremo would even take place this year due to the current covid-19 situation in Europe and the world. Nonetheless, they found compromises and decided to hold it without audience. Tonight we saw the first show of 5 and we found out how half of the songs sounded like tonight!

The show started off as scheduled, a bit after 20:30 CET and after a nice introduction of the host and the show it was time to start with the Giovani portion of the show. The competing artists in Giovani cannot be chosen for Eurovision, but it was a good way to get into the vibe of the evening. Guadiano, Elena Faggi, Avincola and Folcast were the 4 artists on tonight’s show and Guadiano and Folcast ended up qualifying to the next round. (Performances can be found in the playlist down below alongside the ‘Main-songs’.

On with the real show and after a small performance and sketch of the 2 hosts we moved on to last year’s winner Diodato. He sung his winning song from last year ‘Fai Rumore’. We had a nice moment between him and the hosts and then got teased by the first competing act of the night. Before we could get that, they of course needed to show another set of commercials, but after that we had the following songs participating:

Here is the playlist where you can listen to all of the songs that performed:

We also saw a lot of guests appear on the show to either perform or host a bit in the show. We saw Swedish footballer Zlatan Ibrahimovic, currently signed to AC Milan, make a few appearances with hosting. We also saw familiar faces in the form of Loredana Barta and Achille Lauro perform in the show.

After a night full of music and entertainment, we got to see the results of the night and they were as follows: 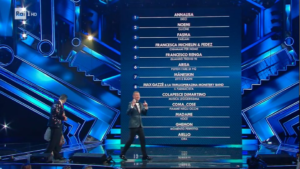 And then that was it, the night was over. On schedule and with a full ranking of all the songs instead of the normal group

What did #YOU think of the first night of Sanremo? Did you enjoy the songs and who were the favourites? We’d love to hear from #YOU! Join the discussions on social media, in the contest or on our forum HERE.