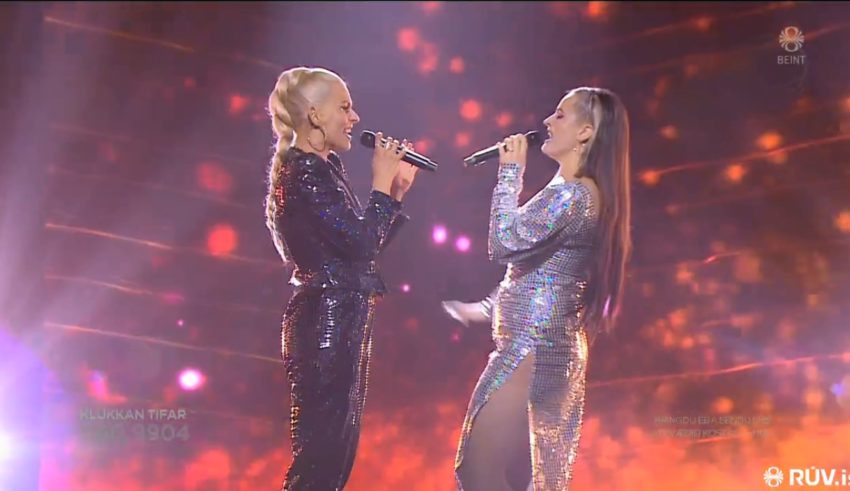 Söngvakeppnin 2020 showcased three young Icelandic artists, but it was the experienced hard rock group DIMMA and the (relatively) mature duet of Ísold & Helga who advanced from Semi-Final 1 to the Grand Final to be held on Saturday, February 22, 2020.

From a group of five contestants, DIMMA and Ísold & Helga advanced in the Top Two from a combination of jury and televotes. There is still a possibility one of the remaining three could advance to the Grand Final as broadcaster Ríkisútvarpið (RUV) reserves the right to pick one of non-selected acts as a wildcard finalist.

The usually breezy and efficient Icelanders kicked off the one hour fifteen minute final promptly with a performance from Friðrik Ómar, then we got into the five acts with a brief biography and interview with each act in their home before they unleashed their Icelandic language version of their entry.

Up first was Kid Isak, whose “Ævintýri” (Adventure) was written and produced by popular Icelandic hip hop duo JóiPé & Króli, showed Iceland what a nice lad he is by being interviewed with his mother and a little fat dog. 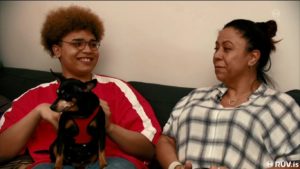 Next up was Elisabet, a young woman who finds the sparse landscape and icy seascapes of her country to be her safe space, before launching into her mid tempo dance number “Elta þig” (They chase you), wearing a tight neon green and black latex skinsuit.

Third, and the introduction showed she is all business as an acoustic guitar wielding singer-songwriter even at the age of 16, was Brynja Mary. Brynja Mary has studied her Eurovision with a costume where she removed an outer layer to reveal a shimmering silver / purple catsuit, performing “Augun þín” (Your Eyes) gamely in a well-choreographed number with four other dancers, including being raised into the air just before the final chorus.

Ísold & Helga were up next, and RUV obviously are aware a lot of foreigners were watching, as we had the obligatory Icelanders making a joke about their “bad” food, with Helga gamely eating some dried fish. Personally I find the joke old coming from another northern country with a reputation for crap food, but someone out there is still getting a chuckle out of smoked lamb (one of the most underrated dried / cured meats, imho). 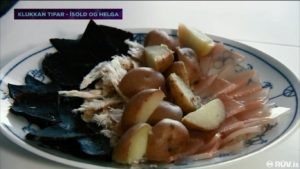 They have won a lot of fans with “Klukkan tifar” (The clock is ticking) and the English “Meet Me Halfway,” and will surely be a favorite in the Final.

DIMMA were up last, and RUV interviewed them in what looked like a band’s back room in a dingy club in the back arse of Vladivostock that smells of urine, stale beer, and marijuana. Turns out it was an attic, office and practice space decorated to look like that. I guess the joke was RUV showcasing an experienced hard rock band but, when you open your mind, they’re just as clean, efficient, and orderly as the rest of the country.

They have an impassioned fanbase who showed up to vote in numbers for their “Almyrkvi” (Eclipse), and we will see how if they can surprise an upset.

To date, Iceland’s best showing at Eurovision Selma’s “All out of luck” from 2009 and Yohanna’s “Is it true?” from 2009. Hatari broke Iceland’s four year non-qualification streak, and the pressure is on to find an act to provide a second consecutive qualifier.

Despite non-qualification, Iceland remains one of the most popular countries for Eurovision, with TV ratings often topping the 95% of households watching television at the time of the Grand Final tuned into Eurovision.

Do #YOU agree with the two qualifiers? If not, who do #YOU think should have qualified for the Grand Final instead? Let us know in the comments below, in our forum, or on social media.