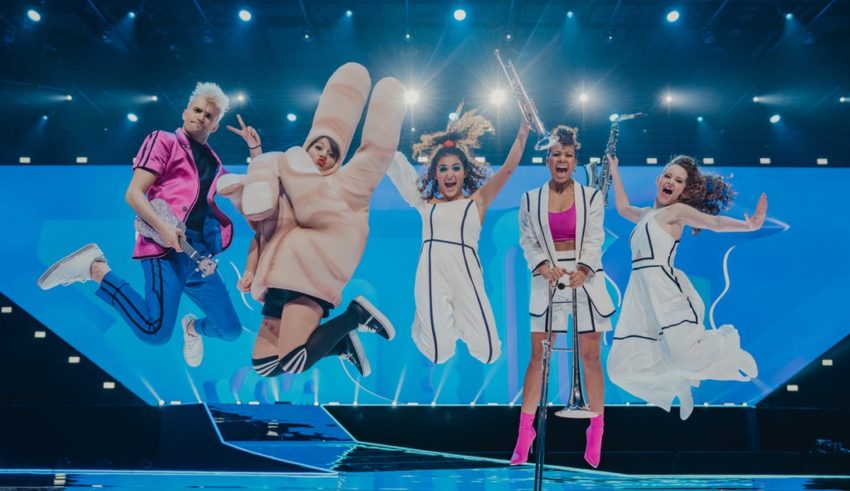 eurovision.de
Jendrik and company, taking the stage and performing 'I Don't Feel Hate' with flair.

Back to the drawing board!

German radio station Bayern3 announced today that the country will be returning to a national selection format for the Eurovision 2022 season. Specific dates for the final, Unser Lied für Turin, are yet to be announced, but the broadcaster has announced some of the details.

Interested artists can soon submit through a portal on Bayern3’s website. The link to that portal can be found here. All the traditional Eurovision regulations apply: artists must be at least 16 years old, songs must be no longer than three minutes, and entries cannot have been commercially released before September 1st of this year.

Aided in a yet undisclosed manner by radio play across public German pop radio, an expert jury will narrow down the field of submissions to five entries. Then, at a final in March, those five songs will face off. The winner will be decided by public vote.

Germany’s return to the Unser Lied für… format follows two years of internal selections by regional broadcaster NDR. The country’s 2020 entry, ‘Violent Thing’ by Ben Dolic, and this year’s entry, ‘I Don’t Feel Hate’ by Jendrik, were both selected via independent jury panels organized by the broadcaster. Germany finished 25th at the contest in May, infamously being one of four countries to receive zero points from the televote.

This has been a rocky decade for Germany at Eurovision. Since winning in 2010, the Big 5 nation has placed dead last twice (in 2015 and 2016) and has also finished in second-to-last place on three occasions (in 2017, 2019, and 2021). Michael Schulte‘s 4th place finish at Eurovision 2018 with ‘You Let Me Walk Alone’ has been the country’s sole bright spot at the contest in recent years.

Do #YOU think this is the year Germany rebounds at Eurovision? Are their any German acts #YOU would like to see compete?  Are #YOU Aly Ryan? Sound off in the comments below, in our forum, or on social media @ESCUnited.