The 143rd edition of the Forum Song Contest took place during January, and was hosted in Göreme, in the Cappadocia region of Turkey, following the Turkish victory in the previous contest. This exciting edition had 36 participating countries from Europe, the Americas, Africa and Asia. 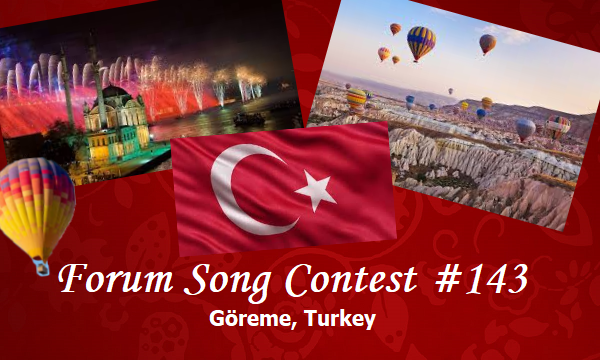 As the results were revealed, Spain managed to build a massive lead, and emerged as the winner of this edition with 150 points. The winning entry was “Amanecer” performed by Saurom. Canada obtained a distant second place with 99 points with their entry “In Your Eyes (Doja Cat Remix)” by The Weeknd ft. Doja Cat, and the Netherlands completed the podium in third place with 90 points being awarded to their entry “Feel Something” by Armin van Buuren and Eurovision winner Duncan Laurence.

This is already the 9th victory for Spain in the Forum Song Contest, making Spain the country with the fourth most victories; only the United Kingdom, Netherlands and Norway have managed more wins. The most recent previous Spanish victory was only 9 months ago, in FSC #134, which took place in April 2020.

Saurom (previously known as Saurom Lamderth) is a folk-rock/metal band formed in 1996 in the city of San Fernando, near Cádiz in Spain. They often use lyrics referring to old poems, legends and stories, or fantasy literature or even religious texts. Important cultural and social issues are often highlighted in their songs through the use of metaphors. Their music is often characterised by Celtic or other traditional elements, and traditional instruments like bagpipes, flutes and choirs often appear. The band has released a steady stream of albums over more than two decades, and have built a solid fanbase across Europe and also in countries like Japan, Australia, New Zealand and the USA.

“Amanecer” was released on 2 May 2020 as the first single from their upcoming 10th studio album, Música. The full album was eventually released on 4 December 2020. The single signals a return to more powerful rock, with guitars taking prominence, and clean and powerful vocals. However, Celtic elements remain in their DNA and come forward strongly in this well-produced offering. Combine all of this with a highly singable chorus, and you are presented with a track that leaves an immediate and lasting impression from the very first listen. The message of the lyrics alludes to the necessity of conserving earth’s precious resources.