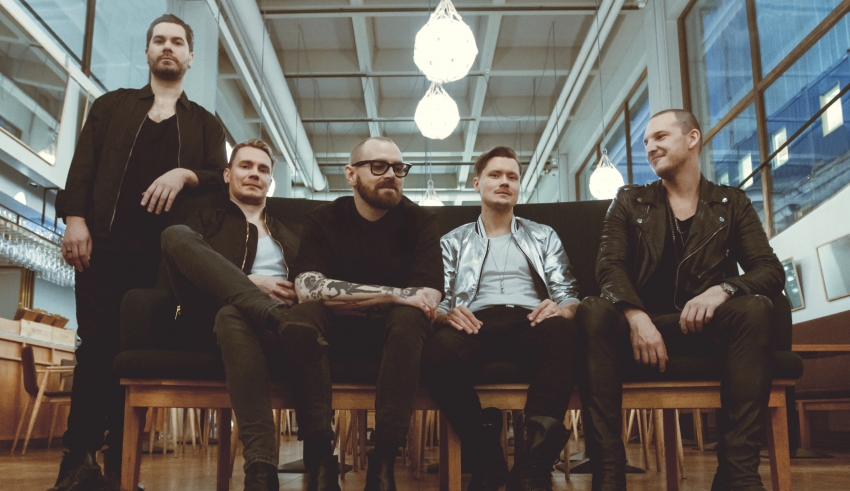 The final of Uuden Musiikin Kilpailu is scheduled for the 28th January 2017. YLE & the competing artists are currently preparing for this show which will decide the artists and the song that will participate for Finland in Kiev for this year’s Eurovision competition. The popular Finish band, My First Band, is one of the competing artists and today Antti the lead singer has found time to talk to us.

Thanks for asking, we’re just great. We had our Xmas break and now we are rehearsing for the UMK-finals!

We’re five guys and been friends for a long time. We’ve been playing together and making music over ten years now.

We love playing live shows and travelling with our music!

Your song that you will be presenting for the Uuden Musiikin Kilpailuun is “Paradise”. What can you tell us about the song?

Paradise is definitely a flirty song with a certain kind of sensuality but it also has the kind of rhythm that makes you want to dance to it. The lyrics are about the importance of human touch, and especially the power touch can have to one another. We wanted to make a song that reminds how important it is to do good things to other people, not to only think about yourself.

‘Paradise’ is the first single release from our upcoming fourth album, which is to be released next year. It wasn’t originally written for Uuden Musiikin Kilpailu in mind. We were writing songs for the next album about the same time when YLE was searching songs for the contest and we decided to give it a go. Our fans have asked us to take part in the contest over the years and now we finally felt we’ve got the right song and the right moment.

I try to watch the whole thing yearly but at least I watch the finals and also the UMK finals. The whole show and the everything around it is so massive it’s just impossible to ignore it. I love the amount of emotion that’s put into the show but also the new staging effects and techinques that are presented every year. Therefore Måns Zelmerlöfs brilliantly crafted show as well as Sergey Lazarev’s performances come to mind instantly when thinking about the entries that really made an impression. My all time favourite of a eurovision song at least at the moment is Euphoria.

Any big scale summer festival in Europe will do just great! In 2014 we supported Sunrise Avenue on their arena tour in Germany, Austria and Switzerland.

We’ve gained some experience already from those big arena stages and once you get there you want to experience it again and again.

It’ll be interesting to see, of course we’re hoping for it. However right now we’re just enjoying the ride, getting ready for the UMK-finals and see where that takes us. I want to be honest with you though, I’d love to see us on that stage in Kiev next spring.

The band has travelled and had various tours all over Europe. How do you feel about that? What was the most memorable moment? Maybe you can tell us a funny situation that happened during one of your tours?

We’re first and for most a live band. The energy that a band creates on stage is something that is hard to generate if you’re an solo act. It’s all about meeting new people and going to new places with our music. We love to make people sing on our shows and the chorus hook on Paradise doesn’t make an exception on that. On one of those bigger arena shows back in 2014 while supporting Sunrise Avenue the audience in Germany was singing so loud I couldn’t hear the drums at some point and I just lost the track of it. It’s one of the best reasons to make that kind of a mistake on stage! And the craziest thing was, the people were there firstly to see Sunrise Ave, not us. So I guess we made a good impression on them.

For me it’s the achievements I’ve had with My First Band. This is the first band I’ve ever sung in and musically and artistically it’s the most important place to be in. Back in 2014 we had our first own headliner tour in central Europe which was one of the coolest experiences so far!

It must’ve been when I was four, that’s when I started to go to violin lessons.  However, I didn’t have any saying to that, it wasn’t my decision. My parents aren’t that musical but for some reason they felt that I’d might want to be dealing with some musical instruments when I’d grow up. Back in that time, it was really hard to have any lessons in classical instruments and the queue for the lessons was shortest in violin, just 4 years! So they signed me up for it when I was born, and started to go to lessons when I was four! I played it for 13 years and I still sometimes fool around with a violin.