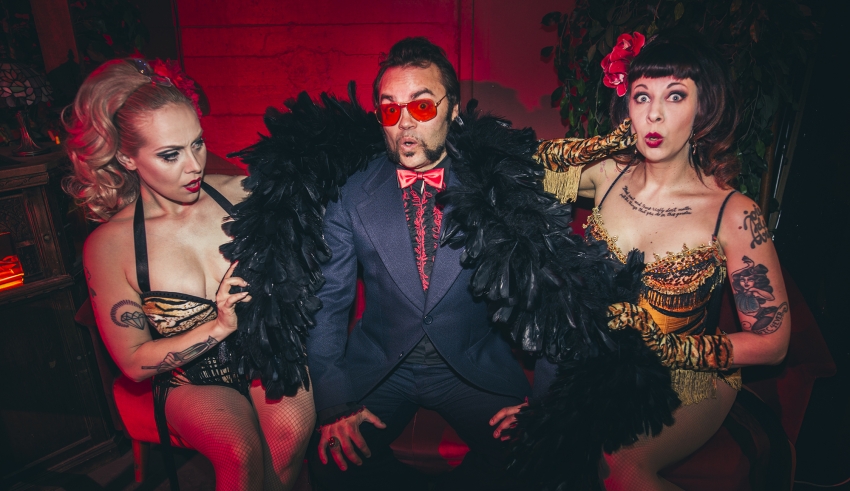 Tomorrow, the final of Uuden Musiikin Kilpailu will be broadcasted in Finland. 10 entries will compete and the winner will repesent Finland in the upcoming Eurovision Song Contest in Kyiv this May. Yesturday, YLE presented the running order. The group Knucklebone Oscar & The Shangri-La Rubies have found time to talk to us today about their entry Caveman.

We are Knucklebone Oscar, a rock n’ roll show monster, and The Shangri-La Rubies – Tinker Bell and TurrrboCherry, showbiz-burlesque-cabaret performers, that when combined put together wild and entertaining shows. We really love to perform; that’s what we live for!

Oscar has been playing rock n’roll, garage rock and blues rock for over twenty years, releasing his first album back in 1996. Oscar has since done 9 albums and has been seen playing his signature over-the-top style shows with lots of guitar soloing, basically going bananas, all over the world. There has for example been a full length movie theatre documentary, Knucklebonehead,  about Knucklebone Oscar touring in China. The film was released in 2013.

Tinker Bell and TurrrboCherry are something of pioneers in the Finnish burlesque scene and have been so for a decade already. They perform actively around the country as well as at burlesque events throughout Europe. The Rubies run Finland’s first actual burlesque school, have been featured in many magazines and television shows, produce events and host their own clubs.

We have performed at mutual shows over the years, and the thought of collaborating more developed at some point. We did some mutual music videos, but our actual idea was to create shows the old school way of live rhythm n’ blues and burlesque with a full band. Last year the combo started to form. Outside of UMK we perform as a sextet (The Ruby Knuckles Sextet) where Tinker and Cherry do backing vocals, some retrotstic go-go dance as well as perform burlesque to the live music of Knucklebone’s blues band.

You will however not see burlesque at the UMK finals, but a high energy rock n’ roll show!

Your song that you will be presenting for the Uuden Musiikin Kilpailuun is “Caveman”. What can you tell us about the song?

It’s rather simple actually: the love of music and dance is in our dna, and if you like something you shouldn’t think too much about is and just let your hips do the shaking and enjoy!  This message is wrapped up in a party rock n roll package.

We have all watched Eurovision since our childhood days, and still follow the competition every year if only possible (if we are not away for gigs or so, but even then we do look up the results). We love that fact that the Eurovision is versatile with different styles of entries, and we love it when there’s a kitsch factor as well!

Our mutual favourite entry would have to be Lordi, because that night was rather legendary over here in Finland!

But The Rubies also add that they love Conchita; Rise Like A Phoenix had everything a Eurovision song can have!

Oscar: Right now I’m so shocked over the news from the US but I would like to perform at the white house and do a concert for President Donald Trump, playing cover songs of my girlfriend’s band, the Liquid Sisters. I’d choose songs like “Fuck That Shit”, “Welfare State Illusion” and “Fuckhead”.

Our style of shows and performance have perhaps in general not been meant for the masses and mainstream, but the ESC is huge, and UMK is rather big as well, so it will surely have an impact. With arts and entertainment you can never please everyone, and you don’t have to, and shouldn’t, but the impact will surely be positive int he way that there will be new people who will find out about us that love what we do!

Well if you measure success in official values it’s probably when Knucklebone Oscar got to represent Finland in The International Blues Challenge  (something of a world  championship for blues) in USA in 2016. And the Rubies performed with their bigger troupe at the Burlesque Hall of Fame in LAs Vegas back in 2011. But on another level we think  those successful moments is more when you have done a great show and you have really given the audience something, no matter how big or small the stage was.

Music has, in one way or another influenced us all through our lives –

Oscar: I come from a family with very little musical involvement and activities when i was young. We hardly even listened to music at home. Still, as an early teenager I was  put to a classic guitar school. And I hated from the bottom of my heart. Still, I kept going cause I had to.

I was maybe 15 years old when lighting hit me. I heard BB King and Buddy Guy records; that changed my life. Luck was that I had the instrument and the basic skills by then. It’s been no turning back since!

Tinker Bell: Ours was a singing family, and music was always playing in the house; I probably learned to sing at the same time that I learned to talk.

TurrrboCherry: I remember my dad listening to rock records and my mom to disco. With my mother we’d but on  many bangles and shake our arms and behinds to the beat. It was the best of fun! We also had a piano that I started playing at an early age, first just making sounds, then later learning how to play (and ended up studying and playing the piano for twenty years).

You can listen to Knucklebone Oscar & The Shangri-La Rubies’s entry Caveman in this link below :