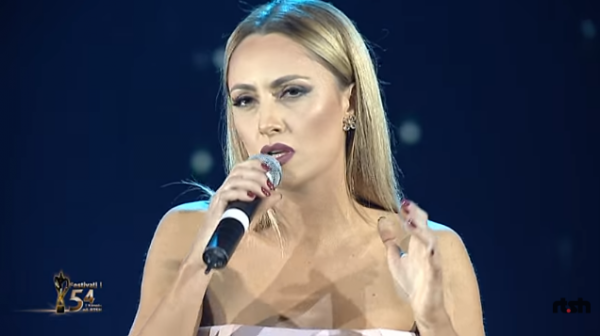 Get your live streams ready and Google Translate open because tonight is the first night of Albania’s national final for Eurovision, the first of the season, long running music festival Festivali i Këngës. Participants this year include past fan favorites, a couple former Eurovision entrants, and a bunch of new names we’re so excited to be introduced to. Stay tuned to this page for live coverage of the event! If you want to watch for yourself, the show starts at 20:35 CET and can be streamed online here: http://rtsh.al/rtsh-live/RTSH-HD.html

Calvin, 20:33: Good evening (morning to our American readers), everyone! We’re settling in for the first night of everyone’s favorite Albanian music festival, Festivali i Këngës, where the first half of the competing performers will be taking the stage. I’m joined by the UK’s #1 exporter of Rona Nishliu fanmail, Kai!

Kai, 20:38: Përshëndetje miq! Christmas has come early this year. It’s a pleasure to be joining Calvin aka Lavieenrose tonight to watch together our favourite national final, the legendary and prestigious, Festivali i Këngës. We’ll have to wait until tomorrow to get our fan boyage on over Rezarta Smaja (and Lindita Halimi in my case) but there looks to be plenty of wonderful artists competing tonight. I’m super excited.

Calvin, 20:40: So this appears to be a montage of FiK songs from years past. What lovely, chirpy little bops they are.

Calvin, 20:42: Annnnnnd we have our first screw up of the day! Timestamps are going to be in CET from now on. Apologies to all who have been confused.

Kai, 21:06: And we’re off! That Festivali i Këngës theme tune is the definition of iconic. Quite possibly the greatest hymn of all time. My body is ready for some Fik!

Kai, 20:16: Incredibly strong start from Flaka. I think I really liked that. I agree with Calvin on her delivery. That feels like a front runner and we’ve only just begun.

Kai, 20:17: Xhejni Lito with “Pritja” now. We’ve got the rock solos going already. Pleasant song but with a bit of a shaky delivery. Enjoyable though.

Calvin, 21:21: “Pritja” is nice, with a lovely guitar solo. “Këtu” from Genc Salihu, whom Kai and I were both super excited to hear from.

Kai, 20:23: Genc Salihu was who I was most looking forward to tonight, and “Këtu” hasn’t disappointed. It’s not what I was expecting but it gave me me a chill down my neck and I had to stop my eyes from watering up. I have a favourite already. Soulful, peculiar and moving. I’m going to be spamming that one as soon as it’s uploaded to youtube.

Kai, 20:24: Woah, mind blown. Our fabulous hosts are now taking a selfie together.

Calvin, 21:29: Genc’s song is incredibly strange. The spoken parts felt both very meaningful and very out of place. I think I’m on board.

Calvin, 21:33: Getting my life with “JAM!” from the backing singers every now and again. Every song could be improved like that.

Kai, 21:39: Now we’re rocking with Xhesika Polo and her song “Eva jam unë”. This is awesome. Something tells me she’s sick as well, as she keeps awkwardly putting her hand to her mouth as if trying to hold in a cough. Her voice is raspy but it’s only adding to the piece. My joint favourite so far, tied with Genc Salihu.

Calvin, 21:43: Festina Mejzini was one of my pre-show favorites, and she’s not disappointing with “Atje Lart.” Totally with Kai on Xhesika Polo as well. That climax was spectacular and unexpected – loving the nasal tone a la Anastacia.

Kai, 21:44: Something a little bit jazzy from Festina Mejzini. Her song “Atje lart” is pleasant and well performed.

Calvin, 21:52: What a lovely in memoriam segment this is. Got a bit tear-pricking when Dr. Flori came up.

Calvin, 22:00: Back to competing songs with Edeja Demaliaj’s “Besoj në ënderra.” Not sure what I was expecting from her, but it sure wasn’t those first few power chords from the orchestra.

Calvin, 22:05: Neki Emra’s “Dashuri dhe urrejtje” is a nice slice of melodrama. That backing singer is elevating the song massively.

Kai, 22:06: We’ve stepped into a time machine for Neki Emra’s “Dashuri dhe urrejtje”. An incredibly dramatic piece, full of intensity. I agree with Calvin that the operatic backing singer is making this especially strong. Her vocals are simply stunning.

Kai, 22:13: Oh my goodness! Did I just hear a naughty swear word whilst watching good ol’ wholesome Fik!? Someone arrest that man on stage now immediately. What the fudge!?

Calvin, 22:17: Yes, Kai, your precious ears do not deceive you. Someone did indeed just shout “WHAT THE F***. WHAT THE F***.” in English. How rude of them finally to throw a bone to us non-Albanian-speaking viewers and have it be that. I agree that he should be arrested.

Kai, 22:23: Well Calvin, my ears have recovered from that swear in time for the next song. It’s a shame Yll Limani’s “Shiu” is the first song of the night I flat out don’t like. It sounds like a dull Sanremo leftover, floating in the middle of nowhere. Too beige and lacking in character for me. Well performed but the song isn’t my cup of tea.

Calvin, 22:28: With regret, I agree with Kai. Though it did have some redeeming qualities, like that falsetto at the end. Franc Koruni  up next with “Macka,” and much like his other songs, they feel like things I shouldn’t be able to get into, but they have some bizarre spark that makes them really interesting, artful, and likable. I’m on board.

Calvin, 22:32: Did anyone else catch that weirdly sexual sparkling wine ad? I don’t think I’m ever saying “sparkling wine” in anything but a Darth Vader voice ever again.

Kai, 22:33: I remember this gentleman was an interval act a couple of years ago, playing a few songs on his guitar. Franc Koruni’s “Macka” is fun and quirky. I’d like to own his sparkly red jacket. He’s got the Eurovision look down.

Kai, 22:36: This lady singing some jazz for us right now is slaying me hard. If only this was competing. This kind of dark, smoky, melancholic stuff used to be my greatest passion. Absolutely stunning. Gosh, Fik… you rock and you lay it down with class and sophistication as well! That’s why you’re my favourite ESC selection show.

Calvin, 22:40: That was extraordinary. Kai’s onto something that she should be competing, but if she were, I worry that everyone would just surrender, and then there would be no Fik, and nobody wants that.

Kai, 22:43: Xhesika Polo’s wearing a bit of a dangerous outfit there. An accident could happen at any moment.

Calvin, 22:46: Kai, how very dare you? Xhesika Polo is flawless and would not let that happen. Onto Orges Tori’s “Shi Diamantesh.” I was about ready to write this one off, since those orchestrations aren’t great, but his voice! Goodness! Saves the song and elevates it into the stratosphere.

Kai, 22:48: Unusual rock track from our penultimate performer of the night, Orges Toçe. His song “Shi diamantësh” I can’t quite work out but I like it. I like everything so far except ONE lonesome song. Will you ever let me down Albania?

Calvin, 22:52: Can’t quite make up my mind on Lynx’s “Sot.” Feels like something I’d sing passionately alone in my room and not let anyone know I absolutely love.

Kai, 22:53: Our final song of the night. Lots of energy with this one. The orchestra is taking LYNX’s “Sot” to a higher level than the piece itself is. I think we have another contender. The audience go wild. It’s far from being one of my favourites of the night, but it’s solid and very well performed.

Kai, 22:54: And so the credits roll, the iconic theme tune starts to play and our first night of Fik comes to an end. What were your favourites Calvin? My top 3 I think would be…

Calvin, 23:00: That wraps up the first semi! As you did, I only really didn’t like one song, but the one I’m already listening to a bunch is Flaka Krelani’s “Osiris.” I love the really subtle darkwave elements to it. Xhesika Polo’s “Eva jam unë” I think is my second favorite (that ending!), and I’ll give third to Franc Koruni and “Macka” for the execution balancing act it had to pull off. Really wonderful semi. Thank you to Kai for this wonderful live blog, and we’ll see you tomorrow, when perennially robbed goddess of Festivali i Këngës Rezarta Smaja takes the stage and we try to avoid sounding like obsessed fanboys. Thank you to our readers as well for joining us; it’s been a pleasure. Faleminderit dhe mirupafshim!

Kai, 23:05: Yes, we must rest our bodies for tomorrow in preparation of Rezarta Smaja’s grand unveiling of her next surely stupendously spectacular entry. I promise we won’t be biased or anything… ermm…. well yeah. Thanks Calvin, it’s been a pleasure, and thank you readers for joining us. Hope you had a wonderful night of Festivali i Këngës. Naten e mire.