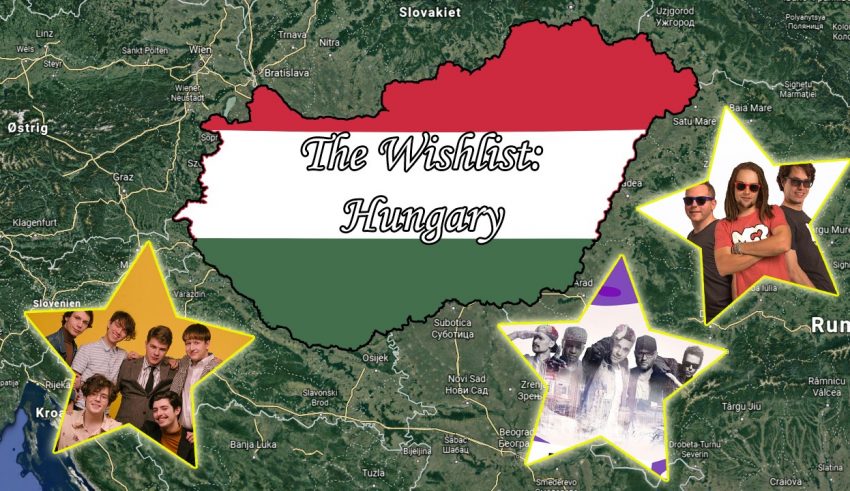 Eurovision has been a big platform for artists to kickstart their careers in the past. This is a beautiful thing in our eyes and we would like to make a contribution of our own. In our wishlist series, we want to put the focus on smaller intriguing artists to give them the spotlight that they deserve. We will go by every country and propose 3 artists that we found interesting. We are striving for a unique list with up-and-coming artists, but keep in mind that this is not always possible. Today we are taking a look at some Hungarian artists!

Let’s start off with one of the most fun artists that has been selected for this series. ManGoRise is a 3-piece band from Budapest and make some of the most upbeat music you will ever hear. They mainly focus on Reggae-like songs, but they try to give it a new and refreshing sound on top of that. This results in a broad spectrum when it comes to songs. Whenever you play one of thier songs, you immediately start to smile and move your body to the contagious music. They have had a few succesful songs that went decently big, yet my favourite is “Hangod Hallom”:

I just really like the vibe and sound of it and I think that something like this would be excellent for Eurovision. It is not often (read never) that we get to listen to some beautiful reggae sounds on a Eurovision stage. How cool would it be to have ManGoRise perform one of their amazing and modern Reggae songs. I feel like it will be something very accesible for the brought audience and I think it would socre a very high placement in the contest. This also because they seem very likable and people would naturally gravitate towards them. this can result in a whole lot of televote points. They could also go more towards the reggae spectrum with a song like “MaCauSong” or they could go more towards some nice melodious Edm like with “Nem Késö“. Yeah, I would love to have such a massive party on a eurovision stage and I think ManGoRise would be an amazing representitive for Hungary one year!

These young lads make some very interesting music as well. They were formed in 2015 and recently they have started to release a bunch of great singles. Their style can be described as trying to bring old-school sounds back to life. They somehow find a way to make the music sound modern and fresh while you get a nostalgic feel while listening to their work. This is best shown in my favourite song of theirs “She’s a sinner”:

I feel like they could do the same for Eurovision. Give people a nostalgic feeling could really result in a lot of points in the contest. They are also very likable and sound really good live. I get that this may not be for everyone, but tit never really happens that a song is only liked. I feel like this would be one of those polarisingartists. You either love them and therefore will probably vote for them, or you dislike them and nothing happens. It is a niche, but I feel like the niche is big enough so that they would be able to get a good position in the contest. “Song about my grandma” is another great example of their ability in producing really good music. They would be another interesting pick for Hungary, but I feel like Hungary is always that country that doesn’t mind taking a risk sometimes.

When I found these guys, I was honestly so excited. I am a big sucker for some well produced Drum and Bass, Dubstep or Trap. Naturally it excited me when I found these guys and I have been listening to their music a whole lot after discovering them. I can’t understand a word of Hungarian, yet I feel like the language goes so well with the music they produce. They are aiming to get a whole lot more recognition outside of Hungary and I feel like thye have the correct tools to achieve stardom. To choose my favourite song of theirs is an absolute cruelty since I honestly found a new artist that I love to listen to. I decided to go with the very energetic “Where we from”:

This song among a lot of others in their repertoire makes me naturally want to bounce and lose my S… while listening to their music. If they were to go to Eurovision one day, it would truly make me insanely happy. We had some Drum and bass before, which also came from Hungary in the form of Andras Kallay Saunders’ Running from 2014. I hope Hungary will pull the trigger in the future and send Brains to the contest with an epic banger. I feel like they would have a shot at winning even, or am I overreacting right now? maybe seeing a live performance of their song “superheroes” will convince you! Their energy is really high and it would make for a very good performance. Another amazing song is “Hollywoodi Történet“. Like I said before, they make too much good music to even make a selection out of. So please feel free to check out a lot more of them, it won’t disappoint you! CouldBrains deliver Hungary a Eurovision win? I would like to think so!

Those were my 3 amazing picks from Hungary! it took a while to find them, but I am very very satisfied with the outcome. We will go by every country in a random order. So if #YOU have some cool suggestions for other countries, please let us know!

What do #YOU think about our picks from Hungary? Do #YOU think they were great and did we miss any cool artists? Share your thoughts with us on our forum HERE or join the discussion below and on social media!