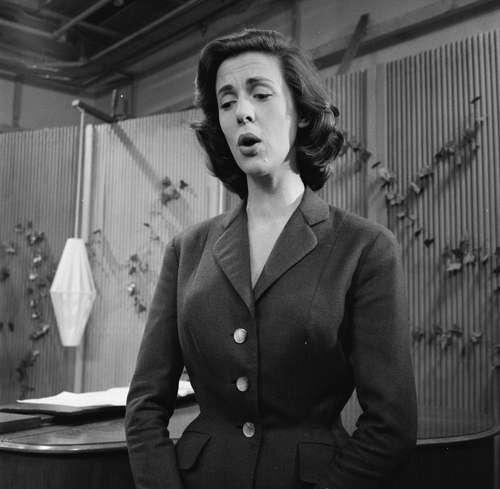 Since its beginning in 1956, Eurovision has had 1,603 acts enter the contest. The last on the list of Contestants in order of song performance, Number 1,603 – Italy’s Måneskin and their rock song “Zitti e buoni” – took home the Eurovision 2021 title on Saturday night.

As the last of the Big Five and the hosts to unveil their song at the Eurovision 2021 Grand Final (Sweden’s Tusse and San Marino’s Senhit, who performed in 25th and 26th on the night, are technically Contestants 1,568 and 1,581 as they unveiled their songs in Semi-Finals 1 and 2, respectively), Europe honored the last contestant as victor, while today we celebrate the 100th birthday of the very first.

As the opening performer at Eurovision 1956 in Lugano, Switzerland, Jetty Paerl kicked off the very first contest representing the Netherlands with “De Vogels van Holland” (“The Birds of Holland”).

Born May 27, 1921, in Amsterdam, Paerl had a very colorful history prior to being one of two Dutch representatives at Eurovision 1956 (Eurovision 1957 winner Corry Brokken being the other with “Voorgoed voorbij”).

Of Jewish heritage, Paerl’s family were immediate danger when the Nazis invaded The Netherlands in May 1940. Fleeing southward through Belgium, Paris and Bordeaux, Paerl along with her father, mother, sister, and Dutch female Olympic swimmer and freestyle record-holder Willy den Ouden managed to escape to London.

Paerl worked designing children’s clothes on London’s New Bond Street, but her father Jo Paerl’s cabaret connections and her voice secured her an important role in the Dutch resistance – the Dutch government-in-exile was based in London – as a performer on Radio Oranje. Known only as Jetje van Radio Oranje, as her brothers were actively fighting in the Dutch resistance and she wished to avoid accidentally getting them rounded up by the Nazis, she performed songs that ridiculed the Dutch National Socialist Movement (the Nazi sympathizers in Holland)

As the war intensified and Radio Oranje’s transmissions started getting effectively blocked by the Nazis, Paerl’s cabaret act for the radio was ended. However, instead of remaining in London, she opted to fight in the the Netherlands and joined the Dutch Royal Army’s Women’s Aid Corp. As the Netherlands was liberated, Paerl found out that both her brothers were alive, as well as much of her direct family, a blessing and a rarity for a Jewish family in a Nazi occupied country, though many of her friends and more distant relatives had been murdered.

After World War 2 ended, Paerl picked up her career doing cabaret on the radio and became a well-known voice as the Netherlands picked up the pieces from a devastating occupation. In 1951, Paerl married artist Cees Bantzinger, with whom she had a daughter in Anne-Rose Bantzinger.

In early 1956, the European Broadcasting Union had decided to create a song contest with the idea that music would be a great step in improving relations but also exchanging culture with neighbors who were both friend and foe during the war. For the first contest, seven countries – The Netherlands, France, Switzerland, Belgium, Luxembourg, West Germany, and Italy – would each send two songs of no more than three and a half minutes.

For the Netherlands’s first appearance, they decided to hold a televised national final with a postcard vote to select the two songs for Lugano. Dutch broadcaster AVRO held the national final on April 24, 1956 at their studios in Hilversum. Paerl was picked by AVRO to compete with three songs, alongside Corry Brokken with three songs and Herb Visser with two songs.

A month later, on a Thursday evening on May 24, 1956 at the Teatro Kursaal in Lugano, Switzerland, all seven countries with their two songs a piece converged, and Paerl’s “De vogels van Holland” opened the proceedings.

There were a lot of unknowns about how the voting went down at Eurovision 1956, but however they did it was not repeated at Eurovision 1957, along with the two entrants per country. Lys Assia won the inaugural Eurovision with one of her two songs, “Refrain.” Where Paerl placed relative to Assia or her countrywoman Brokken (who would win the Eurovision 1957 crown) is unknown, as only the winner was announced. And though it had been televised, Eurovision 1956 is also one of two contests (1964 being the other) where footage has been lost to history, with only Lys Assia’s follow-up performance of “Refrain” surviving. Eurovision 1956 is the only contest where parts of the radio recordings are missing, with the interval acts’ performances lost.

After Eurovision 1956, Paerl did continue to perform. In the 1970s, interest picked up in her World War 2 cabaret and recordings of her Radio Oranje days were found and released. Additionally, she was featured prominently in the BBC’s documentary “The World at War” in 1974.

Tragedy struck in 1985 when a Dutch reporter discovered in archival material that Paerl’s husband Cees Bantzinger was a member of the National Socialist Movement during the war, and upon hearing the revelations, Bantzinger killed himself. The family maintain that Bantzinger had only been signed up for a very short time and due to coercion of young Dutch males at the time to join, and that Bantzinger had deserted them a couple of months later to fight with the Dutch resistance against the Nazis.

So as we observe the last contestant winning Eurovision 2021, let us also look back at and appreciate the very first contestant, a World War 2 heroine whose song about birds heralding in the Spring in Holland also heralded in an international song contest that has kept on going for 65 years.

Now that Eurovision 2021 is in the history books, do #YOU plan to go back and listen to classic editions such as Eurovision 1956? Do #YOU think Paerl should have won over Lys Assia? Let us know in the comments below, on social media, or in our forum.