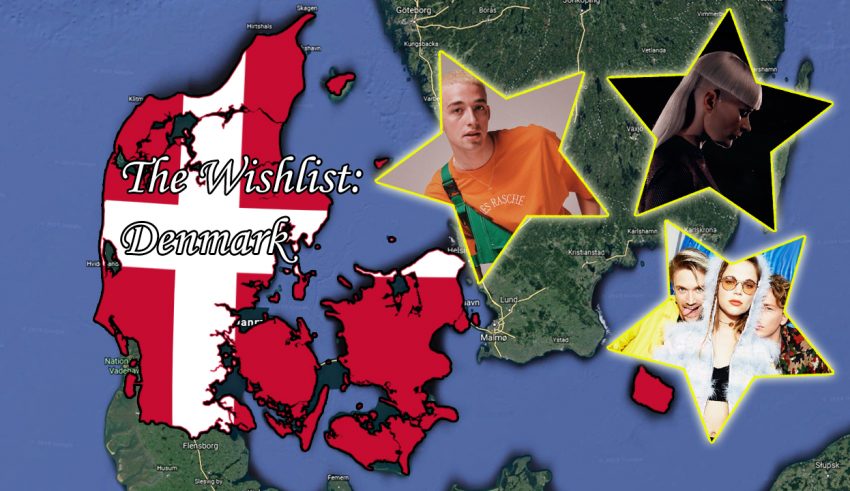 Eurovision has been a big platform for artists to kickstart their careers in the past. This is a beautiful thing in our eyes and we would like to make a contribution of our own. In our wishlist series, we want to put the focus on smaller intriguing artists to give them the spotlight that they deserve. We will go by every country and propose 3 artists that we found interesting. We are striving for a unique list with up-and-coming artists, but keep in mind that this is not always possible. We move on to a country that always does decently well in the contest, it is time for Denmark!

Off bloom is a very interesting group to start off with. They consist of the 3 producers Alex Flockhart, Mads Christensen and Mette Mortensen. The group started with Alex and Mads were in the same band when they were younger. The band fell apart and Mads and Alex were the only 2 left standing. They later met Mette and who did such an incredible job singing with the 2 that they became a 3-piece group. Their sound is very modern and they try to make some good (and usually laid-back) EDM-music. Their most recent single “Are you feeling it too?” is probably my favourite:

You could put this type of song onto a Eurovision stage immediately and do well with it too. You could make a comparison with Lake Malawi who respresented the Czech Republic last year. They would definitely be a great pick for Denmark. They have had a bit of succes in the past, their live performance of their biggest hit “Falcon Eye” is absolutely amazing in my opinion. They just have such a positive energy while performing that song, it is the moment where I fell in love with them. To cool off let’s end with another banger “Love Actually“. Did I convince you that they should go to Eurovision for Denmark? Great, let’s move on to the next artist.

From a group with a great female vocalist to another female vocalist that takes it to another level. The best way to start off with this artist is to listen to a live vocal first. Her beautiful voice is only accompanied with a piano and it absolutely shows how good her voice truly is. She takes this minimalistic approach into her own music too which make for some very interesting and artistic compositions. Take for example one of her recent singles “Addicted”:

Something like this could be really interesting for Eurovision. It is something unique and her voice immediately grabs the attention of the audiences at home. I get that she isn’t for everyone, but that hasn’t stopped other artists from trying before. Yes it could be a bit of a risk, but if I had the honours to choose a representative for a country, than it would be a risk that I would be very willing to take. In my eyes she is an amazing artist with an ear for interesting compositions. Let me show you 1 more song to convince you. “Dead Weight Soldier” is another song where she keeps it minimalistic and interesting throughout.

Maximillian is a young and aspiring artist who released his first single in 2017. He makes some very laid-back EDM, but his main feature is definitely his voice. Also this man’s voice is very unique and he would appeal to a lot of people. He sounds like he should already be a big star, not only in Denmark, but also in other parts of the world. Eurovision could be an amazing platform for him to introduce himself to a massive audience. He will 100% grab the attention fo many with his amazing voice and charisma. His biggest succes to date is a song that featured on the very popular YouTube-channel MrSuicideSheep. This is “Higher”:

We saw last year how a modern ballad was able to win the entire contest. I feel like Maximillian could replecate such a thing. He may not win like Duncan Laurence did, but he will most certainly be able to get a good result in the contest. For the first time in this series I will show you 2 live performances and an original instead of the other way around. Listening to him live is the best way to appreciate how good he really is. Let’s start off with a live-performance of “feelings“. It is from a while ago, but it makes you fall in love with his voice. The best thing is that he literally released a live-version of “Ripples” today. It wasn’t planned whatsoever, but it did make me decide to show you all 2 live-performances. Just listen to him and admire his amazing voice. I sincerely hope that he will try to go to Eurovision 1 day, I think it could mean a big breakthrough for him!

That’s a wrap for Denmark. We will go by every country in a random order. So if #YOU have some cool suggestions for other countries, please let us know!

What do #YOU think about our picks from Denmark? Do #YOU think they were great and did we miss any cool artists? Share your thoughts with us on our forum HERE or join the discussion below and on social media!