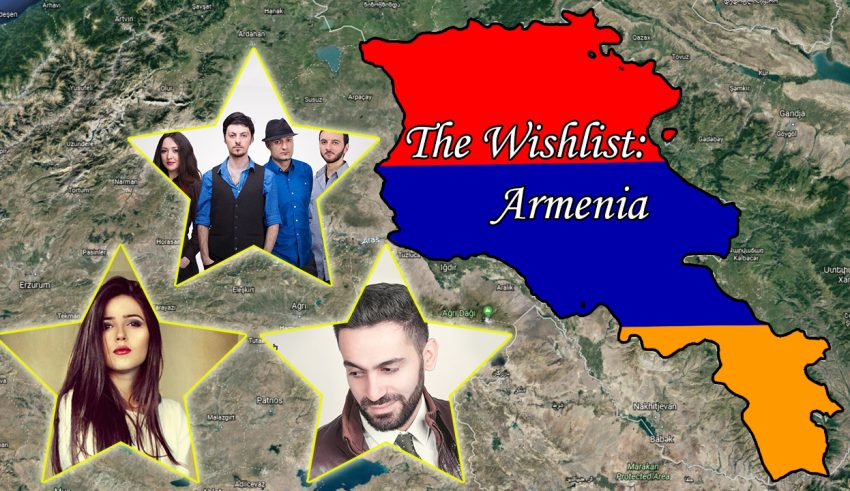 Eurovision has been a big platform for artists to kickstart their careers in the past. This is a beautiful thing in our eyes and we would like to make a contribution of our own. In our wishlist series, we want to put the focus on smaller intriguing artists to give them the spotlight that they deserve. We will go by every country and propose 3 artists that we found interesting. We are striving for a unique list with up-and-coming artists, but keep in mind that this is not always possible. Today the randomizer told us to take a look at Armenia, so that’s what we will do!

We start our wishlist with a bit of a violation of my own rules. Nemra has already tried for Eurovision before, they took part in Depi Evratesil in 2018 and got a second place there. The first reason why I picked them is because it was tough to find modern smaller artists in Armenia that would make my picks diverse. Nemra just gave an extra flavour for my picks to make them more interesting. But at least we know that they are willing to do Eurovision. They are a great indie-band that produces good and easy to listen music. Take “Born in 94” for example:

It is just quality music and the vocals sounds really good on each song too. Like I said, their music is just very accesible to the casual viewer. They are also very likable and together it could result into votes from the people at home. The single “because” could be a really good song for Eurovision actually. I can already envision it on stage and it would make for a great shwo. Talking about shows, remember their Depi Evratesil performance? “I’m a liar” is a very catchy song and their live-performance is really good even though they had just written a text on the screens. It read: “No show, Enjoy the music.” I thought this was a brilliant thing because they showed that they cared a lot about their song. This attitude is really good to have and such characters could really grab the spotlight in interviews and backstage. To me Nemra would be an amazing pick for Eurovision!

Our next artist is a small artist named Narine. She produced some very cool jazz-songs and she definitely deserves more recognition than what she is currently getting. A trip to Eurovision could be the thing that will give her the right amount of attention. I feel like she would be able to produce a quality song when she were to be selected. I personally really enjoy “Gentleman In Tie”:

It has a very poppy vibe to it, but it also retains a nice jazzy feel that Narine sprinkles on top of it with her vocal. I think her voice is really good. It is warm and pleasant to listen to and I feel like that can make her an excellent choice for Armenia. Especially if you use her jazzy voice and mix it with something very modern that could result in an amazing song. She has already experimented with that with “Spread The Light“, but I think that if she amps it up a little bit, we could be in for a treat. If you want to hear how she sounds live? This is a great example!

On to our final artist for Armenia! In my opinion one of the most unique artists in this series so far. He was the winner of the very first season of the national singer contest. He is a judge on the same show now and he is probably one of the most known artists that you will see on one of these lists. Sevak is a very unique folk singer that makes surprisingly modern music. His most succesful and by far my favourite song of his is “Yarkhushta”:

Like what the hell, this is an absolute bop! It would be an incredible thing to have a song like this on a Eurovision stage. It would probably rank really high as well. It has a very catchy beat and the traditional instrument makes the drop an incredible party. He can perform this song live incredible good as well. If you were wondering if he can also make other kinds of music, yes he can! He can also make some epic ballads like “Zguysh Khosir Hayastanum“. This would also be something incredible for on the Eurovision stage. It would make us appreciate the Armenian language a lot more. I think Sevak would be a very interesting and exciting pick for Armenia!

Those were my three picks for Armenia. We will go by every country in a random order. So if #YOU have some cool suggestions for other countries, please let us know!

What do #YOU think about our picks from Armenia? Do #YOU think they were great and did we miss any cool artists? Share your thoughts with us on our forum HERE or join the discussion below and on social media!