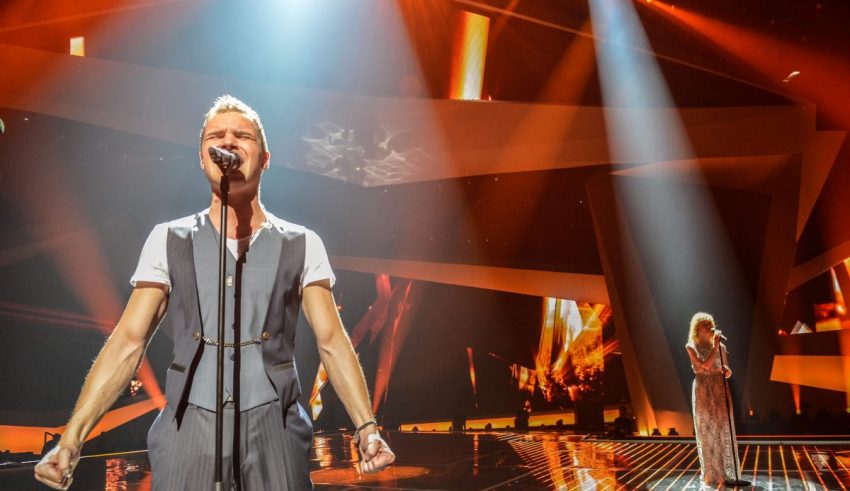 Hello and welcome back to Eurovision this Decade! It’s time to once again look at one more country’s entries that have competed in the amazing decade that was the 2010’s. Today we will be looking at Estonia, but first let’s have a look at how you voted in the Denmark poll!

Estonia have competed in all ten of the contests this decade and have given us some really memorable stuff. Let’s take a quick look at their track record and then get into the rankings!

Performed third in the first semi final but failed to qualify for the final after finishing in 14th place with 39 points.

Performed 15th in the second semi final and qualified for the final in ninth place with 60 points. Getter then performed eighth in the grand final and finished in 24th place with 44 points.

Performed 14th in the second semi final and qualified in fourth place with 100 points. Ott then performed 11th in the grand final where he came sixth on the night with a total of 120 points.

Performed second in the first semi final and qualified for the final in tenth place with 52 points. Birgit the performed seventh in the grand final and finished in 20th place overall with 19 points.

Performed third in the first semi final but failed to qualify for the final after coming 12th on the night with 36 points.

Performed seventh in the first semi final and qualified for the final in third place with 105 points. Elina and Stig then performed fourth in the grand final where they finished in seventh place with 106 points in total.

Performed 13th in the first semi final but failed to qualify for the final after finishing last in the semi final with 24 points.

Performed 17th in the second semi final but failed to qualify for the final after finishing 14th on the night on the night with 85 points.

Performed ninth in the first semi final and qualified for the final in fifth place with 201 points. Elina then performed sixth in the grand final and finished in eighth place with 245 points.

Performed 14th in the first semi final and qualified for the final in fourth place with 198 points. Victor then performed 18th in the grand final where he finished in 20th place with 76 points.

Our diverse team of editors have ranked Estonia’s entries and here are their views of their personal favourites!

This is another song that should come as no surprise in my ranks. I feel like, staging aside, this was the best song Estonia sent in the decade due to the elegance of Tanja’s voice, the fact that she was doing full dance choreography while singing, and since I listen to this song on repeat. In fact, I’d say I likely listen to it about 20 times a month. Tanja, come back please. I need you.

Estonia had one of the best entries of the 2000s with pop classical and of the 2010s with popera. Memo to Estonia – stay classy. Popera such as Elina Nechayeva’s “La forza” are considered “jury wank” for a reason – of course the music professionals who typically make up juries would appreciate the skill required to pull off a “La forza” over the “populist” bilge the televoters may go for (though 2019 was a year the juries went for a stiflingly dull message song and the televoters went for the creative party anthem, so take any comments people may have on jury vs. televote with a fistful of salt because it can work for or against your favorite).

I know not many people are going to agree with me when it comes to Estonia’s best entry, But I just love Storm. Victor has a good voice, and although he was a bit shaky vocally, he did the song justice. I really enjoyed the staging and I feel really sorry for him as the production team very nearly ruined his performance during the grand final. Also, I somehow really connect to the lyrics in this song. I’ve unfortunately had some mental health struggles in the past and have managed to come through them. This song for me embodies coming through struggles and expresses that everything will be okay and I really love it.

Every single time that I play this song and I am alone in my room just enjoying it. It just nearly makes me cry and I think that is beautiful. Music to me is all about emotion and this is definitely a song that gives me that. Ott Lepland’s voice is sooo beautiful and his “shoutiness” is just perfectly on point for me. I could make a case that this is my favourite non-English song of the modern era. I absolutely love love love this!! (little sidenote: I absolutely dislike Verona with its horrible “ahh” sounds. I struggle to listen to it in completion and when I do, it’s rarely without cringing)

Initially I actually didn’t like this, but my, what a grower this was. It all eventually clicked for me on the night, perhaps making it more devastating that it failed to qualify and left me without a chance to fully support it in the final. It’s immensely catchy with a breathtakingly impressive performance and makes me dance like no other.

It was either this or Kuula, but if we are going by studio version, this still gets the most play of the Estonian pack. (If it’s the live version, then Kuula wins hands-down)

We have combined all of our team rankings to form an overall list. This is the complete ESC United team ranking for Estonia! Going with the order of ranking in the contest itself, “Kuula” from 2012 topped our staff poll, with a narrow victory over “Goodbye to Yesterday” in second, and “La forza” from 2018 in third. Do #YOU agree?

In the poll below #YOU can vote for your favourite Estonian entry from this decade!

Thank you for reading this article! We’d love to know what #YOU think of Estonia’s entries and the series as a whole. Get in touch with us by commenting below, posting on our forum or visiting our social media pages!