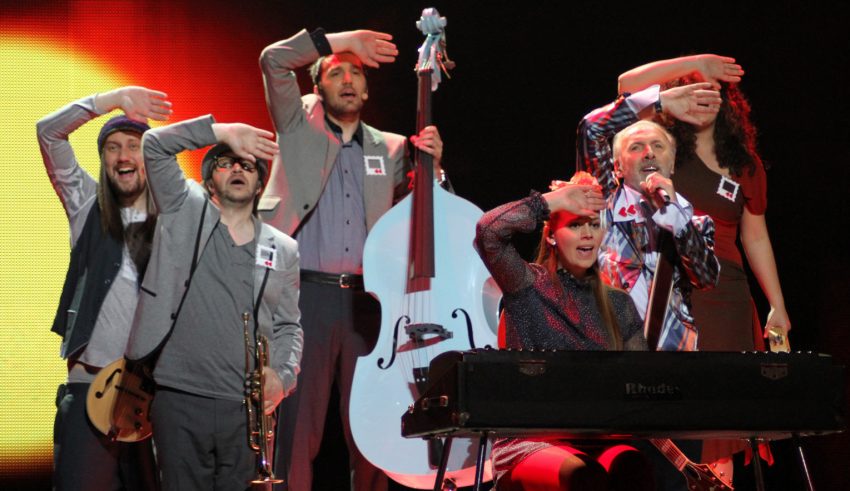 Hello, and welcome back to Eurovision This Decade! The series continues, where we as a team here at ESC United look back at the decade we leave behind and give our opinions and views on each country! Today we are looking at Bosnia and Herzegovina, but first lets take a look at how you guys voted in the Belgium poll!

It was pretty much a two-horse race, understandably, with the two most successful entries of the decade in the top. But it was 2015’s Loïc Nottet that took 40% of the votes in our poll with “Rhythm Inside”. Blanche finished 2nd as 2017’s “City Lights” received 32% of the vote, with 2016’s Laura Tesoro a distant third with “What’s the Pressure”, receiving 10%. Now, on to Bosnia & Herzegovina…

Bosnia & Herzegovina have only competed four times this decade due to financial difficulties, and we as a team really hope they can return to the contest sometime in the near future. Let’s take a quick look at how Bosnia and Herzegovina have done this decade and then get into the rankings!

Performed eighth in the first semi final and qualified for the final in eighth place with 59 points. Vukasin then performed sixth in the grand final where he finished 17th with 51 points overall.

Opened the second semi final and qualified for the final in fifth place with 109 points. Dino then performed second in the grand final where he finished in sixth place on the night with 125 points.

Performed 17th in the second semi final and qualified for the final in sixth place with 77 points. Maya Sar then performed fifth in the grand final where she came 18th in the end with 55 points.

Bosnia and Herzegovina returned for one year in 2016 and performed 17th in the first semi final, failing to qualify for the final and coming 11th on the night with 104 points.

We as a team have ranked all of Bosnia & Herzegovina’s entries from 1 to 4, here are our winners and why they are where they are!

Listen here, this song was straight up robbed in 2016 because this is the best song B&H has sent in Eurovision. It’s got such intense emotion about it, that amazing futuristic cello solo, and the music video is freaking beautiful. But what gets me is the rap section. This is so freaking special and the sad thing is that this song could be the last entry we ever see from them. It’s heartbreaking.

There’s not been too many songs about love in middle age this decade at Eurovision, but Dino Merlin’s “Love in Rewind” was a reminder that there is a sizeable audience for that. But Bosnia & Herzegovina always provided mature ballads with Balkan flair (see also 2006’s fantastic “Lelja”), and for that they will be missed. “Love in Rewind” builds beautifully, and though it ruminates on love in years gone by, it inspires fizz in relationships that are older than the average age of the current Eurovision fan.

To be honest here, it was hard to pick a winner for Bosnia and Herzegovina. None of their entries really inspire me enough to make them a favourite but I’ve gone for Ljubav Je here. It was really pleasing to see Bosnia and Herzegovina return to the contest in 2016, and the song is good! All four elements of the performance worked well together (yes, even the rap!) and it created a very respectable and cohesive performance. I didn’t lose any sleep over its non-qualification, but I wouldn’t have minded this in the final.

Firstly, none of these are bad. I had to pick a winner and it wasn’t even that easy for me, there wasn’t a single song that I particularly loved from this bunch. Love in Rewind is in my opinion definiely the best. It has a nice composition and Dino guides us through the song with his great voice. I’m not a fan of the over the top acting and quirkiness, but the song is fun.

Bosnia’s initial farewell to the contest showed what they were best at; achingly beautiful Balkan ballads. While this isn’t my normal cup of tea, Maya Sar’s enchanting performance in Baku steals it for me, admittedly from a small sample of entries.

Honestly did not get much out of this song in Baku, but the more I listen to it, the more I grow to love it!

We have combined all of our team rankings to form an overall list. Here are our scores for Bosnia & Herzegovina!

2012’s “Korake ti znam” edges it with our writers, the only song not to be ranked last of the four entries in this selection. 2011’s “Love in Rewind” finishes second, just one point lower.

What was YOUR favourite entry from Bosnia & Herzegovina this decade? Vote in our poll below and have your say!

We’d love to know what #YOU think of Bosnia and Herzegovina’s entries and the series as a whole. Get in touch with us by commenting below, posting on our forum or visiting our social media pages!