Hello Eurovision, Chicago calling. You may have heard we are sending one of our finest over to Romania to try out for your shindig. Now, as good as you think 16-year-old Romanian-American singer Laura Bretan is, should she win Selectia Nationala 2019 and progress to Tel Aviv with her song “Dear Father,” please be aware that an army of “concerned” bores will follow and try to make you feel bad for appreciating her entry.

As a survivor of the first wave of the Laura Bretan backlash here in the United States, when her performance of a Puccini aria, “Nessun Dorma”, on America’s Got Talent in 2016 caused a sensation, I want to arm Eurovision fans with a few counterpoints that will nullify the “concerns” of those who wish to point out that: a.) Bretan is not an opera singer, b.) her current singing will cause long lasting damage to her career, c.) we are barbarians for appreciating her, d.) we are exploiting her.

The fairest assessment of Laura Bretan’s initial performance on America’s Got Talent has to be by New York based vocal coach Claudia Friedlander. The gist of the backlash to Bretan, which Friedlander lays out, was that she is singing is not opera, and that she was singing an aria inappropriate for someone of her age. Most social media response to anyone who posted anything positive about Bretan’s performance on social media was this, a Batman-themed insertion into your life as unwelcome as Ben Affleck’s portrayal of the Caped Crusader: 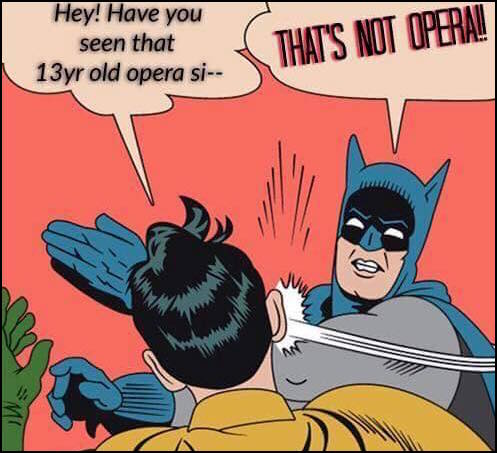 I am linking Claudia Friedlander’s article as her piece is the most thoughtful, most honest, and least pretentious of the Laura Bretan backlash brigade. Most of the rest of the Bretan backlash is pretentious guff by that obnoxious American we all know who visited Italy once and is now the biggest expert on all things Italy, telling the waiter at his local Cheesecake Factory the bread is nowhere near as good as the One Euro loaf he bought from an old guy with a cart in Tuscany. Friedlander’s article is a good faith attempt to bridge the world of America’s Got Talent with the world of opera. She does raise some excellent points on the sustainability of Bretan’s voice, and unlike the rest of the detractors, does exhibit genuine concern that a young talent singing in the way she does will cause long term physical harm. Friedlander recognizes that Bretan is a raw talent who can be improved with formal training, but she also easily lays out counterpoints that we barbarians can use to against the less honest and more pretentious anti-Bretan brigade.

The first and most obvious response is that Eurovision is not America’s Got Talent. Spice Girl and Harehills Goddess Mel C may be the one who first buzzed in to move Bretan to the quarter final, but a lot of the ire of the Bretan backlash was focused on Simon Cowell for praising her performance and using the word “opera” in reference to her performance. There was even a Kickstarter campaign to send Cowell to the New York Metropolitan Opera to hear what opera, performed by seasoned and trained professionals, sounds like.

If by some apocalyptic event foretold by Mayan gods the United Kingdom wins Eurovision again, Mel C’s involvement would be sought after. Less so Cowell, one of the triumvirate of limey know-it-alls (Gordon Ramsay and Piers Morgan being the others) that Americans inexplicably listen to. There is no place in Eurovision for a sourpuss like him. Terry Wogan snarked with love, and though Jon Ola Sand has the look of a permanently disappointed parent catching his teenage son with pornography, there is no one in the Eurovision universe who takes themselves as seriously and aggressively as Cowell. If a Cowell came to Eurovision, we’d run him out of town.

Also, America’s Got Talent has nowhere near the amount of devotion that Eurovision gets. If it did, we’d have an AGTUnited sister site, where our correspondents would hover around the bins behind a Walmart in Barstow, California, to get an interview with a handsome young DJ ready to premiere his new song “You make me so crazy.” Eurovision gets 200 million viewers a year. America’s Got Talent averages around 7 million per episode in 2018. Six million tune in for Mel C, the other million are Americans passed out after a hard day’s work. For Eurovision, viewers pass out only because of Jagermeister.

Eurovision is also an event where groups like Scooch can perform “Flying the Flag” on behalf of the United Kingdom with no serious repercussions. The opera world has never known such unprofessionalism as Scooch. If Richard Wagner was alive today, he would not say, “You know what the Ring Cycle needs? Some salted nuts jokes!” If my Uncle Rick walked up on stage during a performance of “Tosca” and started belting out The Proclaimers’ “I’m Gonna Be (500 Miles),” it would be less jarring than Scooch at Eurovision 2007. In opera, there’s no equivalent to the Maltese giving 12 points to Scooch to troll the European Broadcasting Union. There’s a fantastically high threshold we expect from opera performers that would be unreasonable to expect from Eurovision performers.

In Los Angeles, we are blessed to have several performances a year by soprano Nino Machaidze. She is a master craftswoman, her voice perfected due to more than 25 years of training. The anti-Bretan crowd will point to Machaidze as a reason to dismiss Bretan, because she is the woman who should be doing Puccini arias, but doing so ignores quite a bit of reality. The first claim is that Eurovision fans will not know the difference between a Machaidze and a Bretan. Opera snobs love to believe that their world is exclusive, and that the barbarians do not know the difference between a classically trained legend on the top of her game and a self-taught teenage upstart.

ESCUnited founder and editor-in-chief Matt Friedrichs does know his music theory and has a very good ear as to what works and what does not, and can articulate it. However, if he was to go into too much detail about a particular performer and how he or she deviates from an ideal, a lot of viewers would be saying, “hey, nice words Herr Fancypants, but I’m gonna go check out those other Eurovision guys on YouTube fawning over Markus Riva.” Not that those people would be wrong. There’s a fine balance. Opera is about perfection. Eurovision runs at about 95%. There are years of practice between an average opera performer and a top Eurovision performer, and Eurovision fans for the most part know that. We might love a bunch of dancing Russian grannies, but we do know that it is not the same as opera.

Philosophically, Eurovision fans are in sync with American philosopher Andrew W.K.: We want fun and you better believe it. It is not acceptable to be drunk at the opera. I can’t remember the last time I was sober for the score reveal at Eurovision. I suspect Clinton was president. Last time I checked, you can’t wear assless chaps and a Czech flag draped over your shoulder to the opera. But that being said, for the love of God don’t approach Bretan in those either. The opera lot claim she’s shredding her vocal chords to entertain us, you don’t want to traumatize her visually on top of that as well.

So just as a heads up, if Bretan progresses, the more pretentious friends on your social media will be reposting “Bretan is not Opera” memes and Buzzfeed-level articles written by Williamsburg hipsters who read Friedlander’s article during an indie-rock act who would be tarred and feathered during a Eurovision national selection. But we have heard this all before with the arrival of Sarah Brightman, Michael Crawford, Charlotte Church, and we will hear it again.

As Andrew W.K. says, “when it’s time to party, we will party hard,” and that time for us is Eurovision. Should Bretan make it to Tel Aviv, she will be elevated to the pantheon of Eurovision contestants and will be cherished forever. And as rowdy and drunk as we are, we can tell her apart from Machaidze and Scooch.

What are your thoughts on Laura Bretan’s “Dear Father”? How do you deal with insufferable bores who shame you for loving Eurovision? Share your thoughts with us in our forum, below in the comments, or on social media.