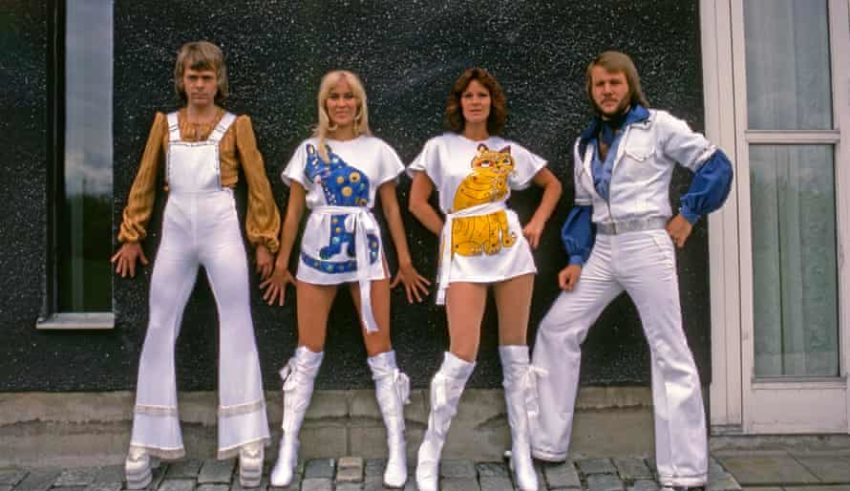 ABBA is one the biggest pop groups of all time, and one of Eurovision’s most successful graduates. After their sweeping victory at Eurovision 1974 with “Waterloo”, ABBA set the world on fire, racking up Number 1’s not just across Europe but across the globe.

Even after they effectively retired as an act in 1982, they never really left the limelight. In the early ’90s, when dance music returned to the top of the charts, they were included on soundtracks to cult films such as The Adventures of Priscilla, Queen of the Desert. Acts like Erasure brought them back with covers, and, in the early ’00s, ABBA’s music found success in musical theater ,and eventually film, with Mamma Mia! and Mamma Mia! Here We Go Again!

So, of course, we at ESC United were thrilled to ribbons when ABBA dropped two tracks from their upcoming album “Voyage,” their first music in 39 years!

But in the lead up to the songs being dropped, we put together a list of ABBA tracks that we consider to be our favorites. Each writer sent in their Top Ten list, and each entry was assigned a score that, appropriately, will be like a Eurovision jury score (e.g. 1st = 12 points, 2nd = 10, etc.). We added the scores up, and in reverse order (i.e. 10th place first), we obtained ESCUnited’s Top Ten ABBA Songs of all Time!

Contributing to this list is a diverse group of ABBA fans of various ages, locations, and musical tastes:

For tie-breakers, the song with the largest count of voters wins, as it indicates a more consensus view.

This contemplative track about Benny and Frida’s divorce is one that appealed to the United States – its highest charting worldwide was 27th on the Billboard Hot 100 in 1981. So it goes with “When All is Said and Done,” which Daniel gave 12 points and Connor gave 7 points.

“When All is Said and Done” is also a key song in Mamma Mia, but the concept is flipped on its head. Instead of divorce, it’s about rekindling an old flame between Meryl Streep and Pierce Brosnan’s characters.

“SOS” is arguably the true successor to “Waterloo,” racking up several Number 1 and 2 positions on worldwide charts. It was also the United States’ proper introduction to ABBA in 1975, with their American Bandstand performance considered up there with The Beatles’ appearance on The Ed Sullivan Show as an important moment in American pop culture.

Though the song only hit Number 15 on the Billboard Hot 100, its stature has grown over the years in the United States, with many critics celebrating “SOS” as the signature ABBA song that blends upbeat pop with melancholic themes and lyrics. James gave it 12 points and William 7 points to tie it up with the other USA based writer favorite, “When All is Said and Done.”

As a cultural touchstone, the song also resurfaced in 2008 for Pierce Brosnan’s infamous vocal performance in Mamma Mia!

I don’t really care, because Pierce Brosnan can do no wrong and, the fact he got his performance all wrong seems oddly sweet and appropriate in context.

Coming in 8th is arguably ABBA’s last smash hit (unless their new material tears up the charts in 2021, a possibility based on initial YouTube and Spotify numbers). Its poignant lyrics are about divorce, though they also feel in reference to the retirement of  ABBA in general. The title is ironic, in battles such as this there are no real winners, only devastation, in a net-negative game of vindictiveness and a realization of damage done being far too late.

This edges “When All is Said and Done” and “SOS” as three ESCUnited writers voted for this versus two. (Sara placed it 3rd, Arnaud 5th, and Connor 6th)

This is ABBA’s infamous. “the band hates it, the fans love it,” track. Though it did not chart in the United States, it found a lot of success in European territories, especially their native Sweden and Western Europe.

Though ABBA had, at this point, found their groove in blending European pop and the ascendant disco scene in the United States, they felt this was one they couldn’t get quite right. Fans disagreed, and so did other bands, as “Summer Night City” is one of their more covered songs by bands from various genres you would not expect to cover ABBA. Swedish symphonic metal band Therion are well known for their take on this misunderstood and underrated ABBA gem.

This one pips “When All is Said and Done”, “SOS” and, “The Winner Takes it All” as four ESCUnited writers voted for it (Sean, Arnaud, Daniel, and William).

The lyrics are a bit strange as ABBA could afford to hire everyone at ESCUnited to clean their swimming pools while singing their songs. “Roy! You missed a few leaves at the 6 foot mark and you’re off key on ‘Super Trouper’,” they shout as they demand another shirtless ESCUnited staffer bring them a martini.

But considering they released “Money Money Money” in the middle of a giant economic malaise in the mid-70s, the idea of a young person struggling to get by resonated and was a Number 1 hit across Europe.

Meryl Streep’s taverna woes in Mamma Mia! ensured this is yet another popular ABBA song that stood out for the younger musical theater crowd.

Let’s be honest, the elephant in the room when talking about “Mamma Mia” in a modern context is the Broadway musical hit and its two film adaptations. But that is not the first time the song broke through with a new audience.

The seventh single from their self-titled album, “Mamma Mia” was ABBA’s first Number 1 in the United Kingdom since “Waterloo,” but “Mamma Mia” broke ABBA into territories such as South Africa, Rhodesia (now Zimbabwe), Yugoslavia, and was one of the more smuggled items of contraband into the Soviet Union.

“Mamma Mia” charted again in the United Kingdom after the release of Mamma Mia! in 2008, and is arguably ABBA’s most recognizable track for the Gen-Z crowd.

What is it with Sweden’s fascination with Mexican revolutions? There’s ABBA’s “Fernando” and Robyn’s “Let’s Do It Again!“, a superb 2014 collaboration with Norwegian electropop titans Röyksopp. I am guessing it’s the Swedish notion of romance in the face of death, that tragic notion of aiming for something grand while knowing the outcome is annihilation?

“Fernando” was a Number 1 hit in Mexico, and also racked up the Number 1’s in the United Kingdom and Australia (where it spent 14 weeks at Number 1, the longest ever run there until Ed Sheeran’s “The Shape of You,” a song not known to be about a Mexican revolution). Again, this blend of catchy, upbeat music has a melancholy barely hidden underneath.

ESCUnited writer Arnaud Abadie said, “it had to be [on this list].” Indeed, for a Eurovision fan site ,we’d look like a bunch of idiots if we did not put their breakthrough sensation, “Waterloo”, on this list.

This is the second most successful Eurovision song of all time, in terms of the singles charts, coming in at Number 6 on the Billboard Hot 100. Domenico Modugno’s whimsical masterpiece “Nel blu di pinto di blu” (all the drunk uncles in the house yell “Volare!”) ruled the summer of 1958, but ABBA kicked on from “Waterloo” to even greater heights.

The United Kingdom is arguably the market where ABBA succeeded most on a per capita basis, which is humorous in hindsight considering they awarded no points to “Waterloo” at Eurovision 1974. ESCUnited’s British contingent did not repeat that mistake, though we are still having words with William Carter about “Waterloo” and the fact that Santa Maria Tri-tip trounces Texas brisket in the BBQ sweepstakes.

“Waterloo” winning Eurovision 1974 is a moment of pop culture significance. Sure, you can argue that ABBA made better songs later (none of our writers placed “Waterloo” first), but you dread to think what the musical landscape of the ’70s would sound like had ABBA not won Eurovision 1974.

I suspect more Americans are familiar with Madonna’s sample of this song than the original, as the three writers who did not vote for this are based in the United States. It did not chart in the United States in 1979, despite being a massive success in Europe.

The Europeans who voted for this song really loved it. Sara, Stefan and noted-European William voted this song their favorite, while Sean and Arnaud voted it their second favorite. The synthesizer riff is like catnip to Europeans, and sounds like a shot across the bow of the emergent Italian and German post-disco scenes. It was a sign that ABBA could evolve their sound as well.

Lyrically, the song is about a married woman fearing the loneliness of the night, a sign of the doom of relationships within the band. For all the hints of relationship breakdowns within ABBA, they seemed to handle it with more dignity than, say, Fleetwood Mac, whose “Rumors” was a cocaine-fueled masterpiece of hate and resentment.

I told a Georgian (country, not state) plumber friend that we were doing a Top Ten list of ABBA songs, and he said “”Dancing Queen” better be Number 1 you f%$^ing b#$%^&@s!” And so it is, as every ESC United writer voted for this universally loved classic.

It was Number 1 in almost every territory it touched, including being ABBA’s only Number 1 in the United States. Its live debut was at a gala for Sweden’s King Carl XVI and his fiancee Silvia Sommerlath, and is forever associated with her when she later became Queen Silvia.

“Dancing Queen” stands out from the usual ABBA formula for its sincere lyrics, its more complex melody, and the Phil Spector-esque wall of sound production. It remains a staple on dance floors at gay clubs due to the unbridled joy, feeling of care free youth, and sexual abandonment it brings out in dancers young and old. It has also served as a coming out anthem, mirroring the gala announcing Silvia to Swedish society.

This is as close to a unity anthem you’re going to get, with very few not falling for the charms of “Dancing Queen.”

Arnaud’s 12 points go to “If It Wasn’t for the Nights,” which he describes as a, “very upbeat song, also my mom’s favorite song ever. Absolutely love it.”

William had a special note for his 5th placed pick, “Hole in Your Soul.” “This is ABBA at their most glam rock and guttural,” he said. “It’s dynamic. It’s anthemic, If you haven’t watched their live performance of the song at Wembley Arena in 1979, do so immediately. By the time Agnetha hits that high note, you’ll be whipping your feathered hair back and forth.”

Sara had an odd duck nomination in “When I Kissed the Teacher.” As a musical theater student, she had a soft spot for the song due to its being an important opening number in Mamma Mia! Here We Go Again!

Which ABBA songs would #YOU put in your all time Top Ten list? Let us know in the comments below, on social media, or in our forum.

Appendix: Here is the table containing each individual’s song scores.