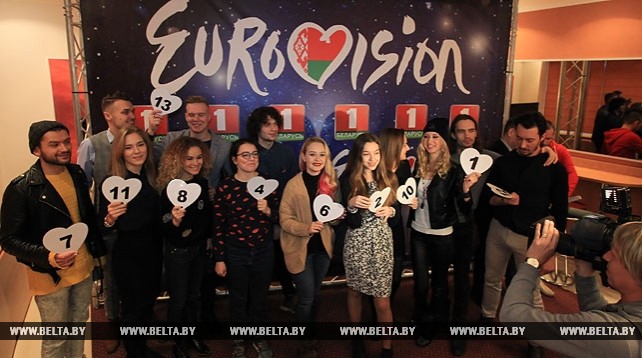 Hello and welcome back everyone to our national selection revote project! Last week, we reviewed the 14 finalists of Festivali i Këngës and our writers and “televoters” crowned Lindita Halimi as the rightful winner. Now it’s time to review the Belarussian selection! Results are only due for tomorrow, but tonight we bring you reviews – by our panel consisting of Kai, Calvin and Ferdi – of 8 of the 13 songs! Enjoy!

July – Children Of The World

Ferdi: Quite nice actually. Calm verses, while the song gets lifted in the chorus. The lady sings well and the song sticks with me. Nicely staged as well. Great effort; would’ve been a very deserving winner for me!

Calvin: This came together live pretty well. In studio it felt like it was utilizing a fair few cliches of modern pop production, but the performance was well done. Thought this would do better than it did.

Kai: This is quite an interesting song to find in the Belarussian selection. I’m unsure exactly where my feelings rest for this one, but it certainly is a style of music that I feel makes a welcome appearance in this NF. It’s a crunchy electronic number that feels very modern in comparison to everything else here. The chorus is repetitive and could have been better. Overall it’s a solid effort though.

Ferdi: Lovely song, I like the sax and the music altogether, but her voice doesn’t quite do it for me. It doesn’t make it against some others here.

Calvin: Aww, this was my fave. The song was a very nice piece, but the highlight was her somewhat awkward, nervous, and deeply charming presence. This was always going to struggle, but I was glad it made it to the selection at all.

Kai: A very sweet and at times tender RnB ballad. This is easily my favourite here. Lexy’s voice is strong and as a piece of music it’s very pleasant. Her voice perhaps is too strong in parts, as she let’s the diva within take over (too much warbling) but overall it’s a beautiful ballad, and the sax solo makes my seal of approval even stickier.

Ferdi: The song and melody are very good, pleasant and original. I also like how this is the first time we will see Belarus sending a non-english song to Eurovision. Their vocals are far from convincing though! They’ll need to work on that.

Calvin: The winner, and alas, it does nothing for me. I don’t really get the same genuine nature to the song most people seem to be getting and enjoying. However, the Belarusian language is a welcome addition that elevates it for sure.

Kai: Ah, my old nemesis, the foot-stompy folk pop song. This one had a hard battle to win me over before it even started. I’m wildly passionate about folk and “indie” music but just cannot ever stomach it in a package like this. It’s well performed enough but irritating.

Ferdi: I’m quite liking this. It sounds a bit mysterious, and especially the instrumental sounds lovely. I like the singer’s voice here, especially his long notes. Worthy effort, I could’ve lived with it if this went to Kyiv, but it doesn’t touch NAVI yet.

Calvin: I found this one much too melodramatic to take seriously, but that doesn’t mean it wasn’t highly enjoyable. I got a kick out of the overblown way he sang and the very sudden melodic shifts of the piece.

Kai: Unusual voice. When I close my eyes and just listen I envision Miss Piggy before me, and she has an absolutely stunning voice. I’m unsure what Kermit would think of her wasting her talents on such a song though. I can’t say that it particularly grabs me in any way, shape or form whatsoever. A very typical, melodramatic ballad.

Isaac Nightingale – On The Red Line

Ferdi: It sounds okay. Nothing wrong, standard pop song I guess. Not a fan of his voice though at all. It’s quite unaspiring.

Calvin: The song never caught on for me, mostly because of the very dark production choices that keep it too heavy emotionally to find it a fun listening experience.

Kai:
Bless Isaac Nightingale and his forever shaking leg. I rather like “On The Red Line”. It’s a spritely little number, full of energy and in possession of a certain charm that the other songs here are missing. It’s one of the more modern pieces on offer here and would be I think a strong entry for Belarus. Bonus points as well for the surprisingly decent English, something we seldom hear with Belarussian entries.

Ferdi: When I read this title, I had a feeling I’d love the song, and boy was I right. A beautiful dramatic ballad, performed well! Very good song, although I can imagine why it was overlooked.

Calvin: It’s not as though I found this a deeply emotional or touching number, but it was a very pleasant song to listen to. Her voice and the melody were both very easy to take in, and it was well-performed.

Kai: This ballad starts calm before building to an explosive finale. It’s the classic ballad recipe. A song we’ve heard many times before and yet I don’t mind hearing it again here. This is strong and well performed by Kattie. With a few adjustments I think this could be a very decent entry for Belarus.

Ferdi: The song itself is already meh, and the performer doesn’t help me to like it either. The song sounds bland for me and I don’t like the guy’s vocals at all – they’re way too screamish for me.

Calvin: I have a really hard time with this sort of pop-rock number, with this dull, off-putting song being no exception. Doesn’t surprise me that it did quite well, however.

Kai: An upbeat electro-pop/light-rock number. The piece of music is passable but the vocals I find incredibly off-putting. Last year I thought Belarus got away with their electro pop-rock but i’m afraid I wouldn’t be able to enjoy this one, even slightly.

Ferdi: Decent, catchy to a certain degree even. Not a very solid entry though; it’d easily get lost.

Calvin: Reminiscent of some of the marimba-heavy sounds of today’s pop, it feels a little bit too minimalist to be the enjoyable pop smash it’s going for.
Kai: Of all the songs here, it’s this one that feels most ready for Eurovision. That’s not say I like it though. This kind of upbeat summery party shebang just isn’t my thing, but it’s well enough performed. The song gives off Shakira vibes, and I like Shakira actually, but just her old school stuff.