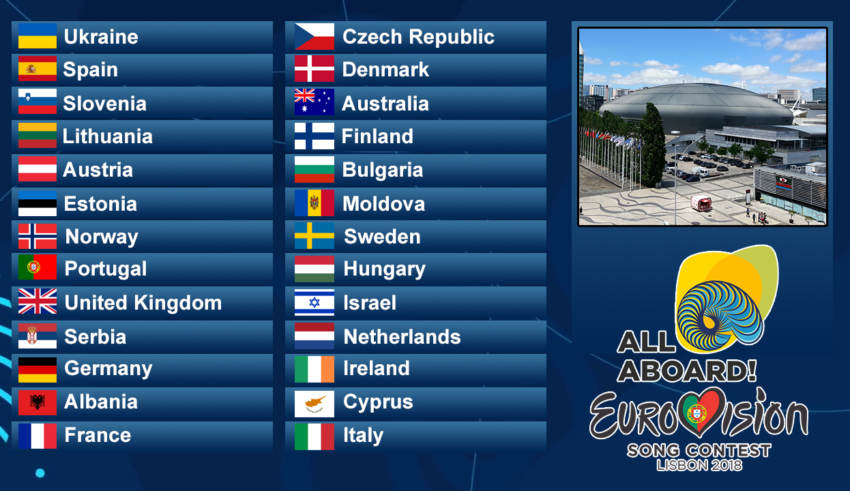 While Europe is waiting to know who will win the Eurovision Song Contest 2018 (and some of us are still wondering about how it went during the semi-finals!), the EBU has now also revealed the voting order for the grand final.

The jury points will be announced first, with each country’s 12 being revealed by their spokesperson as the remaining scores are automatically revealed. The spokespeople will announce their country’s 12 in the following order.

Multiple spokespersons are rather familiar faces to the Eurovision fanbase, with many of them having represented their country in the past. Among those, we have NAVIBAND, O’G3NE, Jana Burceska, Tako Gachechiladze, JOWST & Hovig, who all represented their nations in the 2017 contest. Yet it doesn’t end there, as there are also singers from even further back, such as Nicky Byrne for Ireland in 2016, Joanna Dragneva for Bulgaria in 2008, Alsou for Russia in 2000 and also Amaya(back then as Maja Keuc) for Slovenia in 2011.

There are others who have been the national spokesperson for a number of years, which is the case with Azerbaijan, Austria, Denmark, Albania, Romania & Germany.

In recent years, the voting order has been revealed after the second dress rehearsal of the final, also known as the jury final. This has been done so that the EBU can create some suspense throughout the entire voting sequence, in order to avoid revealing a run-away winner until the last possible moment, in order to maintain the excitement!

However, this was done before the voting rules were changed in 2016, since it now doesn’t matter what the outcome of the jury voting is, as anything can still happen when the televote points are being revealed.

Fans would normally use the voting order to try and work out who might win based on the countries who vote earlier and later before the show takes place, but with the televotes being announced at the end, this is longer as easy as it once was…

Anyhow, it’s still hard to tell if any of this year’s big favourites will win, with the current top 3 with the bookies being Cyprus, Israel & Ireland. All 3 acts will perform near the end of the running order, so it’s hard to tell in whose favour the voting order is.

The only thing that we probably can be sure about is that Ukraine are performing first since they hosted the contest last year and Portugal are closing the show as this year’s hosts. A nice way to say that the hosts have done their job and are ready to give the honour to the next country. It also seems likely that Portugal will be the first country to give out their votes next year. This has been done since 2016, when Austria was the first to give their points, while Sweden was last, and as well as in 2017, when Sweden was the first to give their points and Ukraine were last.

The contest is coming to an end, but we still wonder, who do #YOU think will win it all, and where will we be going next year?