Home Breaking News EDITORIAL: Why Jacques Houdek had the last laugh at the Eurovision Song Contest 2017 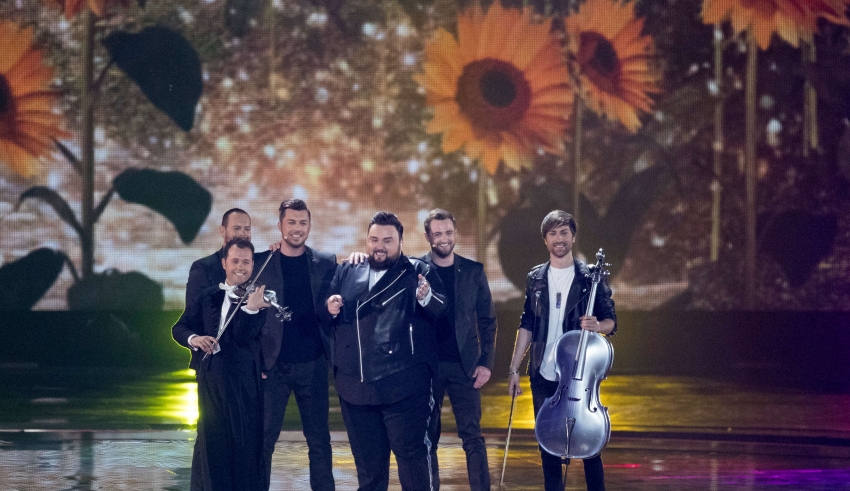 I would not be surprised to see Croatia’s entry from Jacques Houdek (“My Friend”) make the list of polarizing entries at Eurovision 2017.  Jacques chose a daring approach: a duet with himself – one “version” of him singing in a pop style in English; the other “version” singing in an operatic style in Italian.  Both singing styles were done impeccably well, thanks to Jacques having one of the strongest voices this year in Kyiv.  However, the song and staging were both double-edged swords.  What made the song compelling to some may have been what made it problematic to others.  And as the members of the Eurovision press in Kyiv got their first glimpses of Jacques’s rehearsals, there was constant fits of laughter, stemming from the delight of Jacques’s switching back and forth of voices, as well as the staging that unabashedly embraced the eccentricities of the song itself.

It is not unwarranted that many Croatian fans were not impressed with these press center antics.  However, when “My Friend” was announced as a qualifier to the Grand Final, the laughing stopped, replaced by the many cheers of proud Croatian fans, quick to justifiably proclaim, “I told you so!”  Jacques, meanwhile, was beaming with pride as he waved the Croatian flag on the main stage, perhaps knowing his performance on Saturday would be mark the second straight qualification of a country that had struggled over the past decade at Eurovision.  And a week after the Grand Final, Jacques and host broadcaster HRT are likely relishing in what they had accomplished.

Let us also not forget the reinvention of HRT at Eurovision.  Before 2016, the last time that Croatia had qualified to the final was 2009, and that qualification was thanks to the jury wildcard.  One could also go so far as to argue that Jacques had a role in last year’s entry, having mentored Nina Kraljić on the Voice of Croatia.  HRT and Croatia should reflect on the positive changes they have enacted to aid their Eurovision efforts.  Now, they need to apply this positive energy and confidence to seek their first Top 10 placement since 2001 (Vanna “Strings of my Heart”).

Finally, Jacques definitely enjoyed his time at Eurovision and some of his antics make me suspect that he was well aware of the polarizing characteristics of his entry, as well as the Eurovision bubble in general.  First, rather than playing it safe, he dared to embrace the duality of the song, going all-in with the staging.  In turn, he created a memorable viewing experience for viewers and it is no surprise that he finished 9th in the Grand Final televoting (and 5th in Semi-Final 2 televoting).

A past post on his Facebook page suggests that he knew he was going to get little support from the juries. Watch him and his team feigning tears over the jury results below:

His note (I admit, crudely translated to English via Facebook) expresses some discontent, but the video reveals that he was not going to let the jury results take away from his enjoyment of the festivities.  In reality, this happy-go-lucky attitude came through during all the rehearsals.  During the first dress rehearsal for the Grand Final, while most artists stuck to their performance game plans, Jacques (and Salvador Sobral) decided to lighten up the mood with some additional ad-libs in the final chorus.  At the jury show for the second semi-final, right before the final fake-qualifier was announced, the camera was on Jacques, melodramatically pleading and begging to be selected.  Whereas other acts and delegations have in the past approached Eurovision with a cocky and entitled demeanor, Jacques and the Croatian delegation were definitely taking a “carpe diem” approach, living in the moment.  Furthermore, I think back to a off-the-cuff conversation with a member of the Croatian delegation in 2013, who pridefully told me that Eurovision has always served as an opportunity for the country to showcase a part of their identity and culture by introducing talent nurtured within their country.

Say what you want about the HRT, Jacques Houdek, and “My Friend.”  They skillfully played the Eurovision game.  Rather than playing it safe, HRT and Jacques took a risk and it paid off. Croatia finished on the left-hand side of the board and in the televoter Top 10; Jacques received his first #1 at home; and HRT keeps its hopes alive for continued success at Eurovision.  Although the press center in Kyiv was quick to erupt into laughter at Jacques Houdek, the success he garnered for himself, his host broadcaster, and his country has granted him the last laugh.

In our work to CELEBRATE the DIVERSITY of opinions that exist on Eurovision-related matters, we want to know what you think.  Do YOU agree or disagree?  Let us know in the forum!