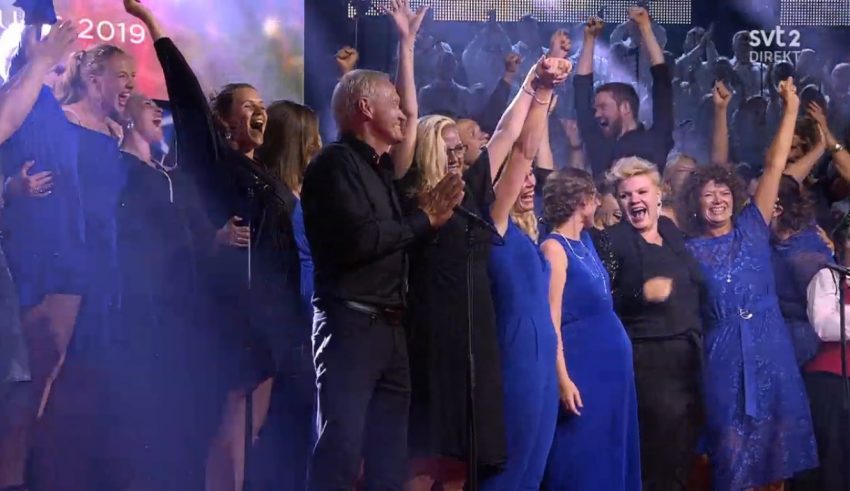 As Jury Chairman John Rutter told the assembled choirs, every choir was a winner by virtue of being able to sing among the best choirs in Europe onstage at the Partille Arena, but it was Denmark’s experienced Vocal Line and their contemporary sound that won the title of Eurovision Choir 2019.

Jury member Deke Sharon told Vocal Line after their performance of “Viola” in the final, “they sing with incredible precision, but never sound stiff.”

Vocal Line edged out second place Latvia, represented by Koris Maska. Koris Maska performed “Come, God!” in the final, with jury member Katarina Henryson saying that Koris Maska possessed “a raw sound and choral sound, and they match it in the most perfect way.”

According to Rutter, the choirs were judged by the three member jury panel in four categories: 1.) Technical skill and accuracy; 2.) Quality of sound; 3.) Musicianship and interpretation; 4.) Communication. The first round featured ten choirs performing a four minute medley of songs, and the three best from that group went through to a final to perform a final three minute song.

The contest kicked off with Sweden’s Zero8, who went with a Georgian number called “Khorumi” – Zero8 started as a barbershop group but added elements from where they’ve performed and studied to their sound – with rhythmic singing based on war dance. They rounded out their performance with an up tempo number called “Carousing as long as we like.”

Specially formed for Eurovision Choir 2019, Almakalia performed second with “Made in Belgium,” a medley of contemporary Belgian pop hits. Almakalia were conducted by Nicholas Dorian, who was a member of a capella group Witloof Bay, who represented Belgium at Eurovision 2011. As Deke Sharon said, “the tourist bureau of Belgium should hire you guys for the next commercial.”

Latvia performed third with an arrangement of Latvian folk titled “Father Thunder,” and were followed in fourth by Germany’s BonnVoice, who performed two light, groovy and playful numbers called “O Valleys Wide” and “Thoughts are Free.”

The fifth act of the night, Norway’s Volve Vokal, brought their modern and innovative approach with “Poetry Please!” Each members began wearing blindfolds made of dyed cheesecloth which were ripped off during the performance, with Gro Espidal’s group falling to the floor at the end. Deke Sharon likened their performance to attending a modern art museum, not quite knowing what to think but finding the experience intriguing and enjoyable.

Denmark’s Vocal Line performed “True North” in sixth, and they were followed by debut country Scotland and the Joy Dunlop conducted Alba. Alba performed two songs in Scots Gaelic, one a traditional song and the other a cover of Scottish band Runrig. Alba also had a specially made tartan created just for this occasion.

Slovenia’s Jazzva performed eighth, and Deke Sharon applauded them for pulling off a remarkable performance with only seven performers, where Jasna Zitnik and her team had nowhere to hide. “Seven people, seven different notes, seven part awesome,” said Sharon.

As winners of Eurovision Choir 2019, Denmark’s Vocal Line were invited to perform at the World Choir Games 2020 in Flanders, Belgium.

Also of note this evening was a performance by Eurovision Choir 2017 winners Carmen Manet called “Shepherd Boy,” and the evening kicking off and ending with a medley of ABBA songs performed by a massed choir assembled from Gothenburg area choirs.

What do #YOU think of Denmark’s win in Gothenburg? Any other choir impress #YOU? Let us know in the comments below, in our forum, or on social media.