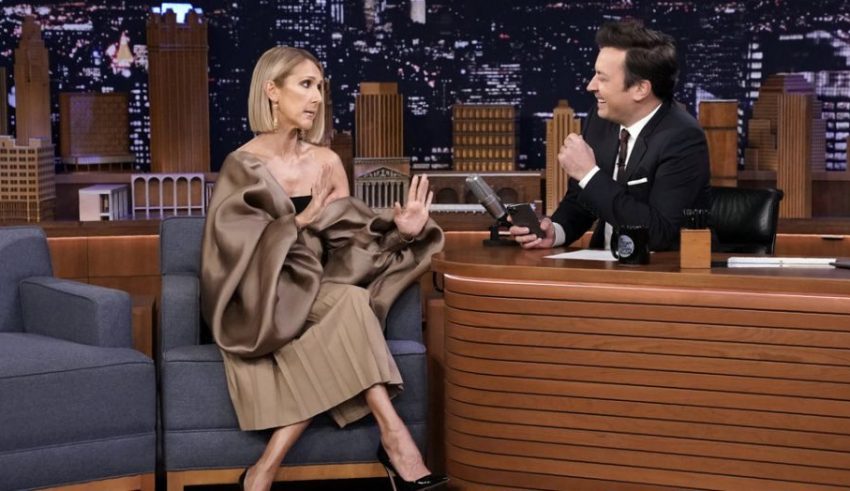 It’s official. The debate over whether Jack could have fit on the floating door next to Rose in Titanic has been settled by none other than Eurovision 1988 winner Celine Dion.

Celine Dion, whose monster hit “My Heart will go on” was the first single from the soundtrack to the 1997 blockbuster film Titanic, directed by James Cameron, was asked by American network NBC’s The Tonight Show host Jimmy Fallon on Friday night for her opinion on whether or not a freezing to death in the Atlantic Ocean Jack Dawson (played by Leonardo DiCaprio) could have fit on a floating door next to Rose DeWitt (played by Kate Winslet). This door debate has created some passionate debate on the Internet for quite a few years.

First off, Celine quipped “Don’t put me in trouble. What if they want to do a Titanic number two?”

For those unfamiliar with the story, the Titanic sank once and for all on April 12, 1912, when the famously acclaimed unsinkable passenger liner RMS Titanic struck an iceberg in the North Atlantic and sank, killing more than 1,500 passengers and crew in one of maritime history’s deadliest disasters.

Celine then delivered her verdict on the door debate: ““First of all, if you look closely [at] the picture, Rose is maybe dead or totally frozen, and she’s not quite all there, okay? Second of all, he doesn’t need an invitation. Come on, baby! Make himself comfortable. Jump in. You know?”

Fallon did indeed show Dion a picture of Rose lying on a door about the size of a twin bed from an overhead angle.

Celine then added, “And then who did not think about this guy who is in the middle of the frozen ocean and that maybe all his body is so frozen that he didn’t have the strength to.”

Titanic is one of the biggest cinematic blockbusters of all time, having gross almost $2.2 billion in box office revenue since its release on December 19, 1997.

Additionally, Dion’s “My Heart will go on” is one of the best-selling singles of all time. Written by Titanic’s composer James Horner, with lyrics by Will Jennings, the song was also produced by Walter Afanasieff (Mariah Carey’s long time co-writer and producer, behind “All I want for Christmas is you”) and Simon Franglen. The single was Number one on the Billboard Hot 100 for several weeks, as well as three dozen other country’s charts.

Celine Dion is perhaps Eurovision’s most successful winner of all time in terms of singles and albums sold after her appearance, as well as longevity of career and overall impact on the music industry.

She won Eurovision 1988 at age 20 for Switzerland, even though she was born in Charlemagne, Quebec, Canada, with “Ne partez pas sans moi” (“Don’t leave without me”). While there are obvious signs that Dion would become a star, the song was one of the less commercially successful Eurovision singles upon release. The song is rarely, if ever, played live by Dion these days, and it was only in 1990, with her debut album “Unison” that she began to establish herself as the top shelf diva we all know and love today.

At $1.4 billion in ticket sales from her Las Vegas residency alone, Dion is one the biggest revenue generating live acts of all time. Tragedy struck twice, and in the space of two days, where both her husband Rene Angelil and her brother Daniel died of cancer in January 2016.

Celine Dion’s latest album, “Courage,” was released on November 15, 2019. The first single, “Flying on my own,” the first single from an album that thematically deals with the issues she’s been dealing with in the six years since her last English album release, was released on June 28, 2019.

Did Celine settle the Rose – Jack door debate for #YOU? What do #YOU think of Celine’s life and legacy after Eurovision 1988? Let us know in the comments below, in our forum, or on social media.