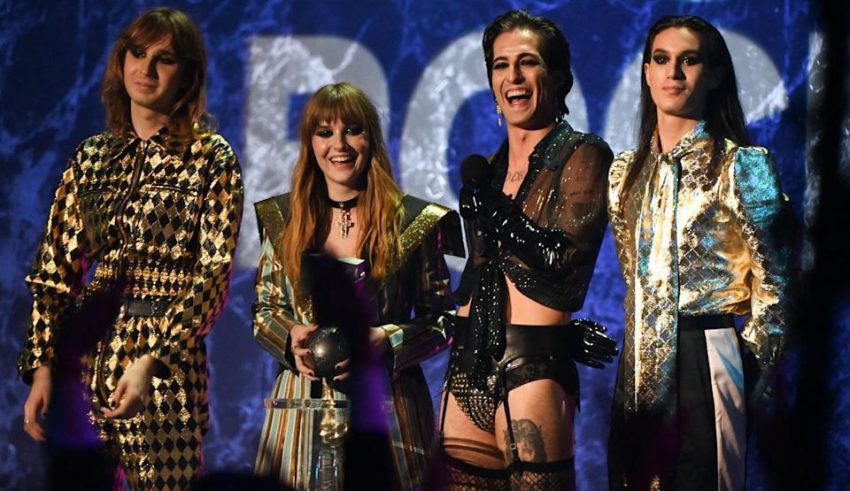 Eurovision 2021 winners Måneskin were nominated for three categories at this year’s ceremony: Best Group, Best Rock Group, and Best Italian Act. The latter is a regional award voted on by the Italian public. Though the quartet did not emerge victorious in two of those categories, losing Best Group to K-Pop sensations BTS and Best Italian Act to rapper AKA 7even, they became the first act not from The UK, The US, or Australia to win the MTV EMA for Best Rock Group. That honor has been handed out every year since the awards began in 1994.

“People usually told us we are not gonna make it with our music. Well, I guess you were wrong.”

Earlier in the night Måneskin, gave a hard-hitting performance of ‘MAMMAMIA’. Resplendent in Gucci designs, the band rocked the house and got the audience on its feet. Damiano, in particular, was wearing an attention-grabbing ensemble, sporting leather gloves, a glittery mesh top, black lace panties, a studded cod piece, garter belts, fishnet stockings, and knee-high black boots.

Two winners and several other nominees at the year’s MTV EMA have Eurovision connections. Diogo Piçarra, winner of Best Portuguese Act, competed at Festival da Canção in 2018. Also in his category was Festival da Canção 2020 participant Bárbara Tinoco. The winner of Best Spanish Act was Aitana, the singer who finished 2nd behind Eurovision 2019 entrant Amaia on Operación Triunfo in 2017. Ukrainian singer Max Barskih competed to represent his country at Vidbir in 2012, ultimately placing 2nd behind Gaitana with ‘Be My Guest’. And nominated for Best Polish Act was Margaret, the singer who finished 2nd in the Polish national final for Eurovision 2016 and competed to represent Sweden at  Melodifestivalen in 2019.

How far do #YOU think Måneskin’s whirlwind success tour can go? Are #YOU as jealous of Damiano’s legs as I am? Is the blue paint Gjon’s Tears was wearing eye safe? Sound off in the comments below, in our forum, or on social media @ESCUnited.