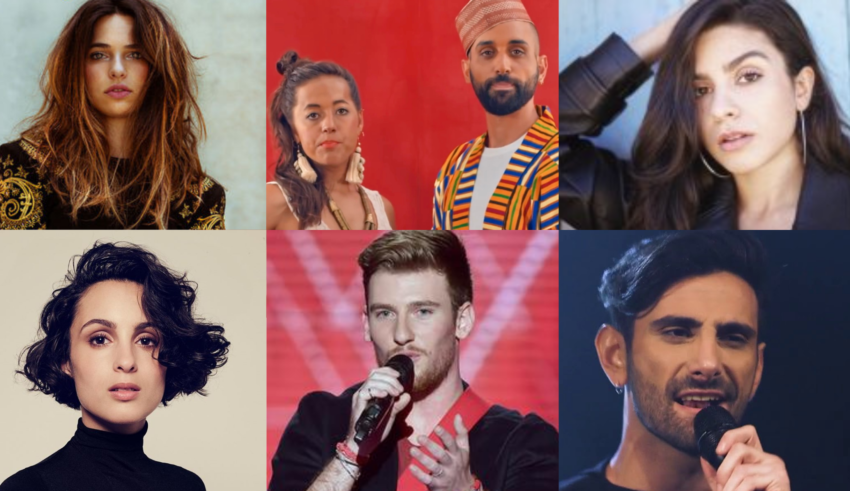 Early this morning news broke from the official Eurovision website that 12 artists will be competing in the 2021 national selection “Eurovision France – C’est vous qui décidez!” As we have reported previously, this show will feature similar elements to that of Destination Eurovision but will feature less artists and more in-house production from  France Télévisions (France 2).

The Head of Delegation also confirmed that there will be a 50/50 split between jury and public voting, which will allow the public a chance to decide their 2021 entry. This was a fair bit of criticism that the delegation received in 2020 following the selection of Tom Leeb internally – many French natives felt that the song did not represent them or would do well at the contest.

France Télévisions has promised that Eurovision fans will be excited for this line-up as the artists and entries provide a great deal of musical diversity compared to prior selections. The artists selected are:

With the announcement we now have 12 excited hopefuls who will contend for the ticket to Rotterdam in the next month. But who are these artists? Join us for a two part special as we share more information about each artist and their song for the selection.

LMK (also known as EveLine) has a background in harp playing and attended a Harp conservatory in Annecy for quite some time. The genre she feels most comfortable in is dancehall reggae, and she has travelled to numerous international festivals such as Glastonbury in the UK, Dour in Belgium, and touring in South America. Her song “Magique” is an anthem for women in the world, and she wants to encourage them to face any and all adversities they face – expressing the magic they all possess.

Ali was originally born in Lebanon and immigrated to France in 2014 due to ongoing wars occurring in his home country. While he was not originally planning to be a singer, he states that living in France has helped to illuminate his talent and potential. According to the broadcaster, the 29 year old wants to make Europe dance with his song “Paris said to me” and encourage those who move to France to also explore their dreams.

Casanova is from Corsica, located in the Mediterranean Sea as one of France’s 18 regions, and has been a folk musician for numerous years. His goal is to represent his island’s culture on a greater scale, and believes that Eurovision is the way to make it happen. His song title “Tutti” translates to All in Corsican, and he hopes that his song can bring people together through music – a much needed sentiment as the pandemic continues to rage on in Europe.

Barbara is a Serbo-Iranian singer has been behind he scenes as a songwriter for many years, and was one of the writers for Carla’s 2019 JESC entry “Bim Bam Toi” as well as Valentina’s 2020 song “J’imagine”. She has also written for many great French artists like Chimène Badi and Yannick Noah. She has been in the shadows for long enough, and believes that it is now her time to shine on the Eurovision stage. In her songs Barbara tends to prefer the emotional ballad genre with a Parisienne twist.

PHILIPPINE is a singer-songwriter and instrumentalist as well – best known for her 2019 hit “C’est beau c’est toi” written by French artist Slimane, as well as her duet with Gavin James on the song “Duet”. According to France 2 she will be the youngest artist in the selection at just 22 years old but she has lived in many places such as Toronto, Canada, Lyon, France, and Cap-Ferret, France. Her entry is a pop rock song inspired by a disappointing experience with love, and she hopes that others will be able to connect with her song and message on stage. She is also a former contestant from The Voice France, having competed in 2016.

The group Andriamad is known for their electropop and tropical vibes that can light up a stage. The friend-duo consists of Cécile who is actually a florist in her everyday life, and Kévin who used to be a carpenter. They write, produce, and compose all of their own songs, and have been recording music for the past 4 years now. The groups name is an ode to Cécile’s grandmother according to France 2. The group hopes that others will “Open Up” to new cultures and musical styles – as the group carries roots from Réunion, Malagasy, Tunisia, and Poland.

What do #YOU think about these 6 artists? Is there one artist or song that stands out above the rest? Share your opinions with us on social media, in the comments below, or on our forum page!