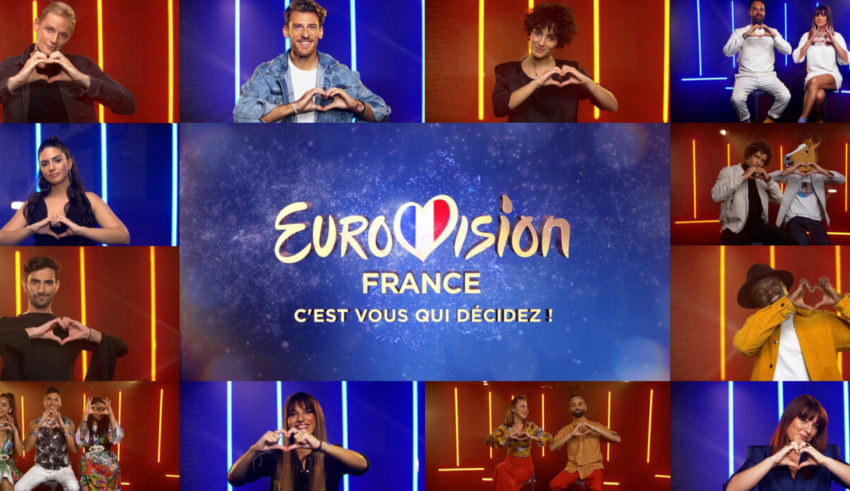 As promsied last week in our first artist spolight article, we are back to shine some light on the remaining artists competing to represent France at the Eurovision Song Contest in 2021. As we’ve referred to in other articles on France, this year’s line-up of artists were selected through a public submission process, unlike in Destination Eurovision where artists were selected through recording studios or labels.

This has created a very diverse playing field of entries, and gives everyone something they can enjoy during the show. As in the previous national selection, the public will decide 50% of the results, while a jury will decide the final 50% of the results. In years past the French public has decided which song will ultimately represent them at Eurovision, tipping the scales in favor of Madame Monsieur and Bilal Hassani. Will they decide the winner once again?

As a reminder, the 12 artists and songs competing in Eurovision France – C’est vous qui décidez next month are:

The selection of Amui shocked many in the Eurovision circle, as it’s the first time an artist from Tahiti and the Polynesian culture has been selected as a candidate for France in Eurovision. The group consists of Ken Carlter, Vaheana Fernandez and Eva Ariitai and all three sport tropical island prints to connect the audience to their culture. Their track is an invitation to explore their culture, but also to celebrate and discover others that are different from you. Ken is very popular in Tahiti as he was a former model, and member of the band ManaPacific while bandmate Eva Ariiai is a presenter on the Polynesia La Première channel.

Pony X is a collaborative music project between Clarence and DJ Pony who prefers to remain anonymous on stage (think Sia). Clarence is from the island of Martinique, another overseas region of France – but did spend some time in the United States where he sang gospel music before moving to France. He also has spent some time performing with big name artists in France, namely the French DJ duo Ofenbach. By partnering with his pony DJ friend, the group Pony X wish to get Europe to dance during such a trying time.

Céphaz – “On A Mangé Le Soleil”

Céphaz was originally both in Ghana, but has moved around quite a bit in his lifetime. At the age of 10 he was adopted and moved to South Africa where he lived for some time before moving to Mayotte, yet another overseas region of France. When he was 20 years old he made the decision to move to France, where he’s been since. Music has served as a safe haven for him throughout his life, and because on his successful summer hit “Depuis Toi (Oh, Oh)” he wants to try his hand at Eurovision.

Terrance was born in Scotland, to a Scottish father and English mother. Despite being born in Scotland, his family moved to France when he was still a child but he is still connected to his Scottish heritage and enjoys wearing a kilt whenever he has the chance. The sounds of his homeland permeate his song, as there are prominent bagpipe motifs hidden throughout the track, and blend perfectly with the electropop melody. Terence’s favorite part of music is his ability to represent all three of his cultures together, French, English, and Scottish.

This duo is made up of Julien and Manon, a couple from La Cluzaz in Savoie in Southern France. Their name is inspired by the day they met five years ago on Lake Annecy and fell in love – June 21st, 2015. Manon has always been a singer and would often perform for people passing by on the street from her window, while Julien worked in the finance at La Défense. Eventually Julien decided to quit his job and settle in the Alps to write and produce music with Manon, and the rest is history!

Juliette is a familiar face on stages across the Eastern hemisphere, as she has been playing the lead role in “Romeo and Juliet” in Russia and Asia for the past 4 years. She also is a former Voice contestant, competing back in 2016 right after she graduated from the Auxerre Conservatory but was eliminated halfway through the season. For a fun fact, she has plated the cello since she was only 5 years old! Her song is a stripped piano ballad that allows her to wear her heart on her sleeve and discuss her need and desire to be loved.

What do #YOU think of these six artists and songs? Does anyone stick out to you? Let us know in the comments, on social media, or on our forum page!