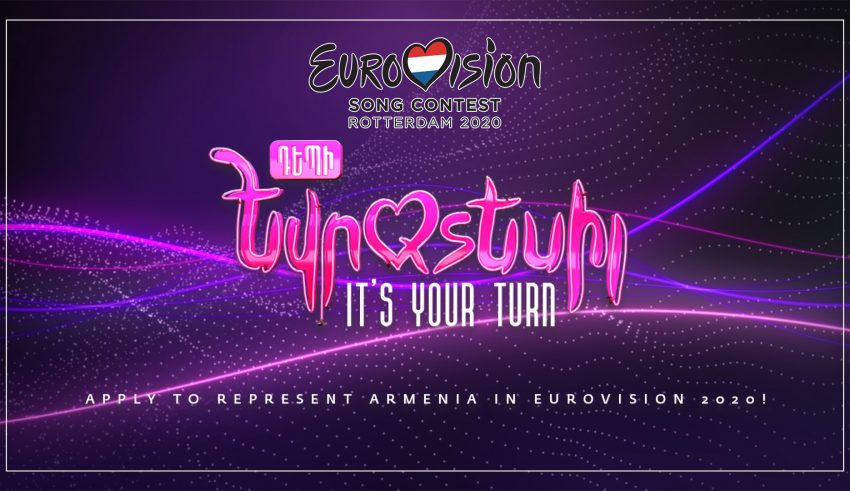 Earlier this year, both Spain and the United Kingdom decided to ditch some sort of national final to select their representative for 2020, but Armenia has just announced that they will revive their national final for the upcoming contest!

Armenia has only recently officially announced their participation, and we can expect them to be on the list of participating countries, which hopefully gets released later this month.

You can even apply right now, should you be considering to represent Armenia – of course, there are certain rules – cause they insist that It’s Your Turn, which seems to be the slogan for the national final.

AMPTV (The Armenian National Broadcaster) has at this point not announced any date for the national final, but has announced the rules that apply for anyone interested, which are the basic rules pretty much.

The Armenian head of delegation, David Tserunyan has also expressed his excitement on twitter.

Even a commercial was published along with the news of the return of the national final.

This will be the third time, that Depi Evratesil will be used to select the Armenian representative. The contest was introduced in 2017 and re-used in 2018. However, which format the national final will go with is still unclear, as in 2017 the contest was used to only select the singer, which was won by Artsvik, her song “Fly With Me” was internally selected. In 2018 on the other hand, the contest picked both the artist and song, which was won by Sevak Khanagyan and his song “Qami“. It is however, mentioned in the rules that applicants will submit their own songs, so most likely we’ll have a similar national final to the way it was done in 2018.

In 2019, AMPTV went with an internal selection and selected Srbuk and her song “Walking Out” which you can watch right below. Unfortunately, she failed to qualify to the final, from a very difficult second semi-final line-up in Tel-Aviv, she finished 16th with a combined score of 49 points.

Are #YOU looking forward to Depi Evratesil in 2020, and do #YOU believe that Armenia can turn their luck in Rotterdam? You’re always welcome to join the discussion on our forum by clicking HERE, or by posting your opinion on our social media sites.