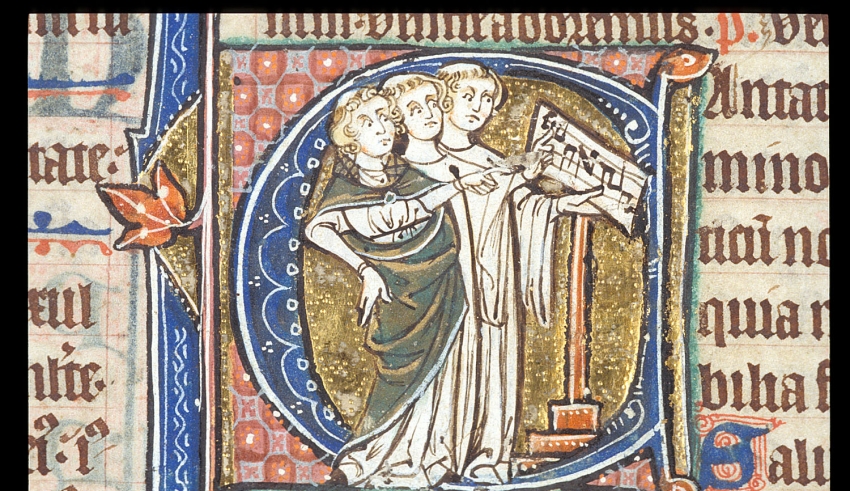 Whilst it is believed by many to have begun in 1956 in Switzerland, the Eurovision Song Contest has, in fact, existed in one form or another for a number of years. Recent research by Prof. A. Prillis from Valetta University has uncovered a surprising sequence of events throughout the ages. It seems that the contest can be traced as far back as the mid-11th century, although certain scholars believe that the roots could go as far back as the Roman Empire. The evidence for Roman origin is sketchy as best; relying mostly on a few vague quotes from various Roman authors, such as in Caesar’s Gallic Wars where he refers to “Gallia est omnis divisa in partes tres” (Gaul is always divided into three parts) and some commentators have taken this to refer to Rome’s 53 BC entry “Gallia” with its unusual mix of lyre, male vocals and hobnail boots. There are also various interpretations of Tacitus’ account of the Claudian invasion of Britannia being an excuse to find out how they were producing such successful entries for the contests of the late-30s, early 40s AD. However, we shall not concern ourselves with such idle and unsubstantiated gossip, and instead turn our attention to Prof. Prillis’ research.

She begins her work with a discussion of what she believes was the first contest. This was the result of many years’ coordination by the much revered English King, Edward the Confessor. England was the natural choice of location for such a contest, as it had enjoyed a number of years of peace, as well as having a large number of continental connections through various royal marriages. The contest was arranged for April 1066, but sadly in January, Edward died. After much discussion, it was decided to go ahead with the contest, but with a short postponement out of respect for the dead King. In the well-known Bayeux Tapestry, a comet can be seen in April and Prof. Prillis believes that this indicates the original date for the contest “passing by”. The original list of contestants posed a huge problem for Prof. Prillis’ investigation, as there appears to be no written record of the competitors. We do, however, have an idea of the participating nations. England, evidently as the host nation, had an entry, as did Normandy, Brittany and Flanders (France, it seems, didn’t send an entry at this time; probably in objection to the English hosting). The Norwegians also sent an entry, but they appeared to have got the wrong location as they turned up in the North of England as opposed to London. The resulting chaos led to three major battles and a new King of England, but the winner of the contest remains less certain, even with this latest research.

One of the many complaints about modern Eurovision is that it includes countries which are not really European, but it seems this has very longstanding routes. Prof. Prillis has uncovered a document, the “codex irreveratus papalis” which seems to detail the early contest organisers or, as they were known at the time, “Popes”. It seems that Israel was an early winner, as the Pope in 1095, Urban “city dweller”, called for all Europeans to head over there, undoubtedly for the contest in Jerusalem. It seems that Israel won at least another seven times, as various “Popes” called for further mass trips over there over the following two hundred or so years.

In these early days, it seems that the contest was not held every year, although this is likely in part due to the travelling time in this period. Contestants would have to set out months in advance of the contest, and collecting televotes could literally take years. Very few records of televotes survive from the early years of the contest, although Prof. Prillis and her team believe that the “Domesday Book” in England in 1086 is a list of the televoters who voted for the winning entry that year; “Dome’s Day” from Byzantium in celebration of the Hagia Sophia. Obviously no National Finals were held in this early period, due to the obvious expense of getting people together for them. To be chosen as an entrant was a great honour for people, as it was generally the local ruler who would choose them. In this period, due to the constantly shifting map of Europe, it is very hard to trace which countries participated year by year. Clearly it was possible to enter even if you were just a Dukedom or such, which led to a record number of German entries in 1147 with no fewer than 37 entries in that language. Unsurprisingly, it also led to the most convincing winner “Scherz des Tages” which won with over 450 points and 35 “douze points”.

German domination was exemplified when, in 1193, Richard the Lionheart, the King of England, entered himself into the contest with his song “Lavie en rose” (Pink Gardrobe) and won, despite getting into a fight with the Austrian entrant, Leopold, over who had the best lion on their flag. This ended with Richard being imprisoned in Austria for a year and he was only released after a huge payment to the Germans and a promise (only revealed in 1213) to give England’s 12 to Austria every year for the rest of Richard’s life. This controversial agreement resulted in an angry response from France when they found out, cumulating in an invasion and attempt to force a similar agreement on England in 1216 which very nearly forced England out of the contest. Prof. Prillis reckons that it was this that led to the Treaty of Lambeth clauses which prevented any country being obliged to give points to another. Unfortunately no copy of the Treaty has survived, but she believes that these clauses would have been signed by all participating countries at the time.

So next time, we’ll be looking at 1217 onwards into the 14th Century and the impact as the German states expanded eastwards, as well as investigating the impact of May D’Ittuppe’s work on current thinking on the contest as Martin Luther led the Reformation to reduce the influence and power of the Contest organisers!

Is Prof. A. Prillis fooling us with her research, or is this the start of an exciting new chapter in the Eurovision history books? What do #YOU think? Share your thoughts with us below or on our forum!