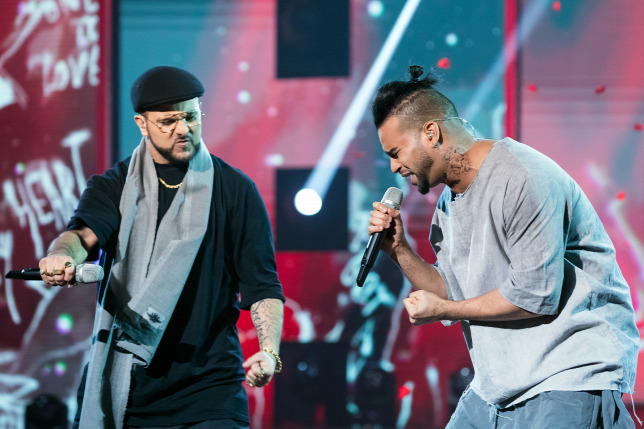 Hello and welcome back to #YOUrovision 2019, where we count down YOUR chosen top 50 national selection songs from the 2019 contest’s selection season. We’re moving up the list and into the top 40 now, so which songs featured in this block?

Disclaimer: Due to a mix-up in a tie-break during the vote count, Freedom Jazz should have been announced in 43rd place, with Stefan moved up to 39th place. This is reflected below.

Finishing as runner-up to Maruv’s ill-fated “Siren Song”, Freedom Jazz were more than worthy of their placing in the strong Ukrainian selection. Their multi-lingual electro-jazz track had us swaying and bopping along, and a colourful attention-grabbing staging saw the trio mix a high-flying plane trip with Moulin Rouge theming. It doesn’t sound like it should work, but it’s fun and exciting, and what would Eurovision be without these performances?

As Kállay-Saunders’ star continues to rise in his native Hungary, his collaboration with Farshad Alebatool would have certainly been a stand-out in Tel Aviv and potentially moved the duo on to bigger things, with the modern pop and hip-hop mix giving this earworm the air of a commercial success on the international stage. Sadly, it wasn’t meant to be, with Joci Pápai fulfilling the double A Dal victory instead, but fans will not forget the quality of this submission too soon.

After impressing with his performance as part of Vajé in 2018, Stefan returned to the Eesti Laul stage this year with the piano/pop ballad “Without You”, and brought us a dramatic, emotional performance in the final in Tallinn. Despite reaching the final three, it wasn’t to be his year, but the impression he left on fans ensured his place in this countdown and leaves us hoping it’ll be third time lucky in 2020!

The ‘Fairytale’ from Norway’s most recent Eurovision winner, Ingrid Berg Mehus already has her place in contest history. This year, she wanted to go one further and step out into the limelight, and her expressive performance of “Feel”, complete with the trademark violin and complementary frozen Nordic synths, was a real treat for us back in Melodi Grand Prix. She unfortunately did not make the ‘golden final’, but MGP fans won’t forget this song in a hurry.

This writer’s personal favourite, I must admit! D’Sound surprised us all earlier this year with this delightfully silly and cheery slice of French house mixed with electropop, with lyrics that look a little deeper than they seem on the surface. While D’Sound’s staging concept was eventually used by the Czech Republic’s Lake Malawi in Tel Aviv, it is executed to pleasing effect here, and the colourful enthusiastic performance of the song helped “Mr. Unicorn” to the gold final of Melodi Grand Prix.

A Dal veterans Leander Kills were back once again in 2019, and bring us our second violin-based track in this part of our countdown. The impassioned performance and unique blend of genres saw the metal band take a departure from their usual style but with a song featured a memorably melody and a powerful progression through the gears, it’s no wonder this caught the imagination of many national selection fans earlier this year. Could they make it fourth time lucky in 2020?

Come back on Tuesday to see which songs finished between 35th and 31st place in this year’s countdown!

Make sure to discuss the results on social media using the hashtag #YOUrovision!