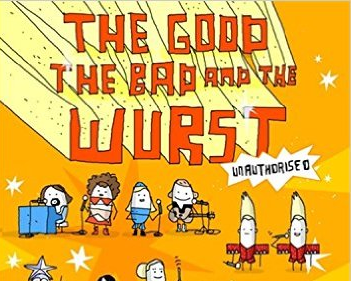 Do you like fun Eurovision stuff for free? Well this is your opportunity to get something unique in your mail. We are going to raffle off the Eurovision’s 100 Craziest Moments book, the Good, the Bad and the Wurst. It was written by Geoff Tibballs.

For 60 years the Eurovision Song Contest has existed in a parallel universe where a song about the construction of a hydro-electric power station is considered cutting-edge pop, where half a dozen warbling Russian grandmothers are considered Saturday night entertainment, where a tune repeating the word ‘la’ 138 times is considered a winner, and where Australia is considered part of Europe During those sixty years we have witnessed scandals: in 1957, Denmark’s Birthe Wilke and Gustav Winckler enjoyed an outrageously long 13-second kiss because the stage manager forgot to say ‘cut’ during the live broadcast. We have witnessed national outrage: the 1976 Greek entry was a savage indictment of Turkish foreign policy in Cyprus. But most have all we have witnessed silly costumes, terrible lyrics and performers as diverse as Celine Dion and Dustin the Turkey.

This book chronicles the 100 craziest moments in the history of Eurovision – the drag acts, the bad acts, the nul points heroes and the night in Luxembourg when the floor manager warned the audience not to stand up while they applauded because they might be shot by security forces. It captures some of the magic from this yearly event that continues to beguile and bemuse in equal measure.

Now I’m sure you’d like to know how to get your hands on this? It’s simple, there are three ways to enter the raffle:

2. Twitter: Very simple, just retweet or like this Tweet and make sure that you are following us. If you retweet, you will receive two tickets for our raffle.

The raffle ends Friday, January 27th 2016 so make sure to do your part to enter the raffle. The winner will be announced on social media and contacted via Facebook, Twitter or Instagram. This is a Paperback book but if you have a Kindle and prefer a digital version, we can most accommodate that request. You can read the details about the book HERE

Good luck to you!