Home 2017 Will the United Kingdom flop at Eurovision due to Brexit? 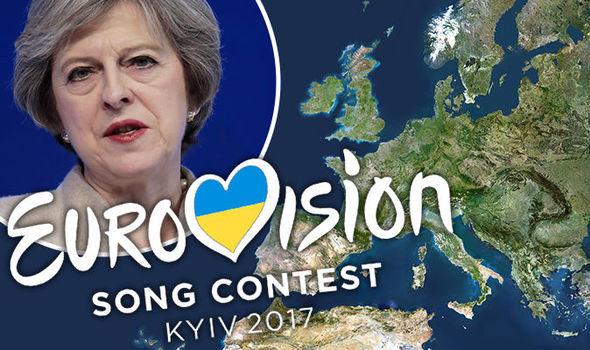 It has begun: The conspiracies and predictions about the United Kingdom and the Eurovision Song Contest are all over the media and it appears that one thing can be expected:

Bitter EU countries will punish the United Kingdom at Eurovision due to Brexit.

At least that is according to some tabloids, including the Daily Express. They recently published an article discussing the effect Brexit may have concerning the UK’s participation at this year’s Eurovision. The Bookies at William Hall have the UK odds of just 3/1 predicting that the UK entrant comes last at the event. Overall, the betting odds are incredibly low for the United Kingdom, with Betfair placing the odds at 38/1 whilst Paddy Power putting them at 34/1.

According to Jon Rogers, the author of the article “The UK is expected to suffer a humiliation in the annual Eurovision competition, as experts say it is due to Britain’s decision to leave the European Union”.

When you look at the comment section, a lot of readers seem to be sharing that sentiment:

In 2003, the United Kingdom finished dead last when the band Jemini were unable to stay in tune vocally, walking home with the first zero pointers for the UK. . You can listen to “Cry Baby” and judge it yourself. The late Terry Wogan, commentator for the BBC at that point, said that the UK was suffering from “post-Iraq backlash” and this accusation is still being used by a number of people to justify the poor result that year.

While the contest is still a few months away, it appears that the UK is already preparing for a disaster this May in Kiev, Ukraine. Now the question remains: Are these early accusations accurate and fair? The six hopefuls announced by the BBC on Monday, had a lackluster reception by fans as far as song quality and diversity is concerned. People shared their thoughts online and on Social Media.

The overall feel on our forum was fairly negative:

While some folks were unhappy with the overall negative tone, the response was largely negative.

When you look at Twitter, the comments are not that different

@bbceurovision Bland and generic, they have no chance.

@bbceurovision Melodifestivalen has it right with the ‘melodi’ part. Where are the melodies in these songs? What an embarrassment.

@bbceurovision Usual bland dross. HollyBrewerhas the best song of a very bad bunch. Wouldn’t vote for any of them. Another loss for the UK.

But it appears that some fans of the contest, or opponents for that matter, will have an excuse in case the UK ends up near the bottom in Kiev, Ukraine this May.

Considering everyone hates the UK post Brexit, we should just send gay sailors in rainbows singing “Putinhas a juicy arse” to Eurovision

It isn’t always the easiest thing to have a conversation with individuals who already have a set opinion about Eurovision and the voting. It appears that it’s quite common for people to look for information that fits their narrative rather than letting the facts create the narrative.

The fact is that the United Kingdom hasn’t done well at Eurovision recently. Their last Top 10 result was in 2009 when Jade impressed the rest of the continent with “It’s my time” finishing 5th overall. But since 2012, they haven’t  been anywhere near the left side of the scoreboard.

Considering the country of Adele and Freddie Mercury has left a huge mark on music, why is it that they can’t do replicate that success at Eurovision? So some people immediately blame politics and animosity towards the United Kingdom but if you look at facts and data, the story tells a different story. Songs that usually do well in the British charts, tend to do better at Eurovision as well. Let’s take a look at the last five entries that finished in the Top 10 at Eurovision and look at their charting peak position in the British charts:

So for the most part, the British people were also less excited and interested in those songs so the results at Eurovision should make a little bit more sense. Or at least you can’t just blame the rest of Europe for disliking the country. Yes, there are always other factors that will come into play and staging and live vocals can have a significant impact. But there has been no evidence presented to me that would make me think “Yes, Europe doesn’t want to vote for the United Kingdom because of Politics”.

This does not mean that there are no politics in the Eurovision voting, there is a reason why Azerbaijan and Armenia always put each other in last place. But there is no hard data out there suggesting any kind of political voting pattern against the United Kingdom.

But with the poor reception of the NF participants, there is a possibility (no certainty) that this could end up being another bad year for the United Kingdom. But regardless of the facts, detractors now have an excuse and it’s unfortunate that instead of working on improving the selection process, some will find a scape goat which to me is counter-productive.

While it’s going to be nearly impossible to convince the hardcore critics, I truly hope that the common sense fans will see that there is no vendetta against the United Kingdom at Eurovision.

If you want to discuss this article, you can go to our Forum and share your thoughts there.

Matt Friedrichs is the Editor-in-Chief for ESC United. The opinions expressed in this commentary are solely those of the author.