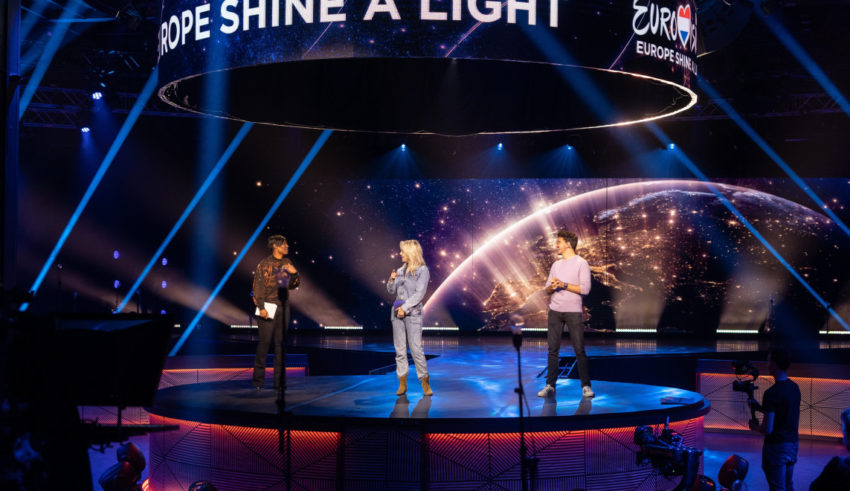 Of course, it’s a strange and sad day for Eurovision fans across the globe – tonight would have seen the final of the Eurovision Song Contest 2020 in all of its glory at the Ahoy Rotterdam.

But, there are reasons to be cheerful, as the EBU and the Dutch broadcasters NOS, AVROTROS and NPO have been hard at work putting together a live replacement show from Hilversum, and tonight the broadcast of Eurovision: Europe Shine a Light will take place from 21:00 CEST!

The show will be hosted by the planned hosts for Eurovision 2020; Chantal Janzen, Jan Smit and Edsilia Rombley, with Nikkie de Jaeger (NikkieTutorials) also on hand to host the online aspects of the show.

All 41 entries that were planned to take part in Eurovision 2020 will be honoured during the show in a non-competitive format, with participants from previous contests also set to make appearances during the two-hour celebration.

The artists of Eurovision 2020 will come together to perform the United Kingdom’s 1997 winner “Love Shine a Light” from their homes, as well as a performance of Eurovision fans singing along to Johnny Logan’s “What’s Another Year” which won the contest in 1980.

Another segment of the show will see landmarks across Europe lit up to honour the Eurovision Song Contest, including the Eiffel Tower in Paris, Atomium in Brussels, the Verona Arena in Verona and the Acropolis in Athens among others.

All 41 participating countries, plus Bosnia & Herzegovina, Kazakhstan, Kosovo and Montenegro, will broadcast tonight’s show live, making it a real celebration and gathering of Europe in difficult and strange times.

The show will also be streamed live on Eurovision’s YouTube channel, which #YOU can see below;

Will #YOU be watching Europe Shine a Light? Share your thoughts and plans for tonight with us on our forum, below in the comments and on social media!