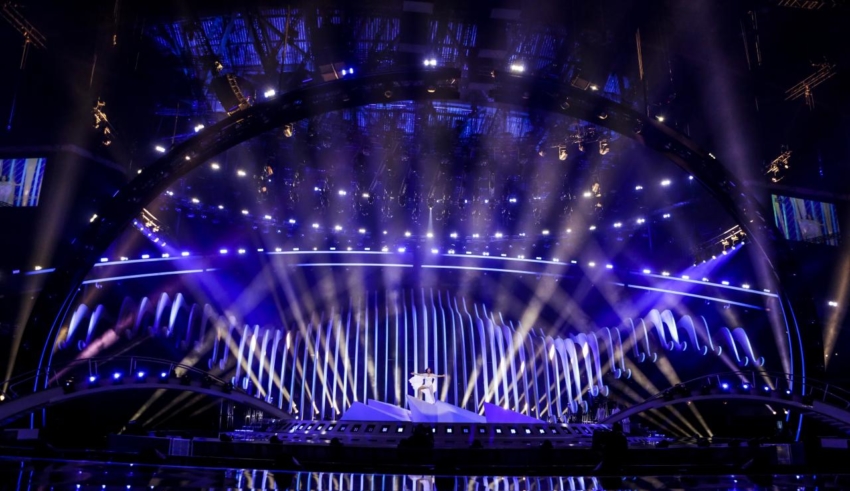 When diagrams of a Eurovision stage are released, there is usually a grand response, in both a positive and negative way. But when the Eurovision stage for Lisbon was announced, it seemed that the negatives outweighed the positives tenfold. Had Weider lost his design skill? Would this design ruin the entire Eurovision experience? Was the stage even that bad? The answer to all of these questions was a simple no, but a large element of the modern stage was missing: LED screens.

When Weider and the EBU released the concepts for the stage, the message was clear. The organizers of the contest wanted to make sure that Portugal’s first hosting experience was true to the country’s history, while keeping the stage design modern, elegant, and most importantly unique. By announcing that this stage would be the first stage in 18 years to not feature LED screens, they managed to do exactly that.

Back in August we asked a very simple question on our social media: Does the presence of LEDs make Eurovision better or more distracting? Of the responses we received, it appears that three areas of opinion exist.

The first group wanted the LED screens to stay away from the contest, calling for Israel to draw inspiration from the Lisbon stage. Some readers mentioned that they had a greater connection to the performances in Lisbon than in years prior. It seems that the absenceof screens made each performance memorable and beautiful. Some even said that the 2018 contest was one of the most beautiful editions of the 21st century, going on to state that these performances didn’t need a LED wall to be great. It seems this group has an excellent point.

Hopefully it won’t return… show is ok but we are voting for the song… that’s what matters for some of us, ESC fans…

Due to the lack of flying boat scenes and confetti cannons, the focus went from the LED screens and back to the artistry happening on stage. In essence, it drew the definition of a successful Eurovision performance from a design perspective to a composition and song perspective. More creative camera angles were used, and the focus was not on the artists, not the stage they stood on. In the adapted words of RuPaul it became “May the best song win.”

Take for example Lithuania’s own Ieva Zasimauskaitė, who replicated her Eurovizijos Antraka staging. The only element that the Lithuanian delegation added to stage weas holograms of families to illustrate the meaning of the song. The delegation from Cyprus also decided on a simplistic staging, utilizing Eleni’s dance background to bring literal and metaphorical fire to the stage. The French delegation utilized the power of Madame Monsieur’s song, and left the stage completely bare. Each of these entries finished on the left side of the scoreboard.

On the other side of the aisle, there were claims that the use of LEDs are essential to the contest. When LEDs existed, there was a level playing field where all countries had an equal shot at qualification. The countries that lacked a surplus of funding to produce a Sasha Jean Baptiste quality staging could create a thrilling but simple LED design to augment their entry; while the countries who could afford such an expensive staging would simply have a more intricately designed LED design concept. Neither of these two groups would be disadvantaged, as either group would have an equal chance to succeed. According to many readers the emptiness of the stage was to blame for many disappointing stagings.

With the lack of LEDs, countries scrambled to figure out a stage design plan that would impress the viewers and juries. The solution that many delegations turned to was props. The 2018 stage saw a vast reliance on props, portable screens, tube lights, and additional elements to make performances stand out from the other entries. While some used these props to augment the message of the composition, others brought garish and excessive designs that tried to compensate for the absence of LED screens.

One such country was Romania, who came so close to qualifying out of the second semi-final. Romania’s staging carried a deep message behind it, but the mannequins on stage made the staging seem somewhat strange and creepy. Russia also falls into this category of overcompensation. Julia took the stage in a massive LED mountain, a scene that was borrowed from her music video. However, this mountain carried little relation to the song “I Won’t Break” and the prop completely eclipsed her performance. Azerbaijan also failed qualify despite a staging that utilized massive triangle shaped platforms. Could they have qualified if they had used a simplistic stage show?

It would appear that a simplistic stage show didn’t guarantee qualification either. This group also argued that the lack of LED screens and overuse of props put certain countries, especially those with smaller budgets or those that utilized a simplistic staging, at a significant disadvantage. Franka from Croatia took the stage alone, for which some called her crazy. Switzerland’s Zibbs also kept their staging simple, trying to draw attention the message of their song “Stones” and not to gimmicks. However, both countries were unable to qualify.

Fan favorites weren’t safe either. FYR Macedonia was a popular entry moving into rehearsals, but its bizarre staging caused it to crumble in the first semi-final. By using the stage as it came, the entry became lost in the semi-final. Greece and Belgium also failed to live up to expectations placed upon them. Greece was unable to perfect their staging throughout rehearsals week, while Belgium’s staging lacked any resemblance to the Bond theme within Sennek’s song. Although these songs were ranked at 6th and 10th in our 2018 “Expert” Panel, they ended up placing in 34th and 30th place overall in the contest.

The final group called for a balance to exist between both LED screens and stage performances. Personally, this would be the side I would take. In this idealistic sense, delegations would be able to retain some choice in their staging through LED usage, but would still need to exhibit creativity and resourcefulness. In essence, this would signal a return to the role LEDs played in the 2000-2009 contests, where the screens added to but did not subtract from the artist’s performance. Under this model the contest could continue into the modern technological age without sacrificing the creative integrity of the stage and prevent distracting LED screen shows that many countries relied on in Kyiv.

Additionally, this balance would allow for equal access to potential staging options within the contest itself. If a delegation wanted to use an LED display for their entry, then the option would exist. Similarly, the option would exist to use only the stage and create a magical moment without an LED display. After all, providing countries with options is better than giving them only one option, which is what happened in both Kyiv and Lisbon. Given this balance of access, it’s likely that we could see some truly unique and varied stagings throughout future editions of the contest.

I say we need a balance. The problem with 2017 was that the LEDs were too distracting whilst this year some of the performances were underwhelming or over the top. So I'd say give delegations an open field of choices, but they need to remain creative at the same time.

But in order to achieve this, a culture shift would need to occur in the contest. LEDs would have to come back in a controlled way, and delegations would have to continue the creative work they were required to use in Lisbon. Fewer props will likely grace the stage, as acts won’t need to fill an empty and lifeless stage. And lastly, each act would have an equal chance at success in the contest itself. We learned earlier this week that LED screens are in KAN’s plan for the 2019 stage, but this begs the question: Which side of the LED debate will the Tel Aviv stage pull inspiration from?

What do YOU Think? Share your wishes and desires for the 2019 stage on social media or join the discussion on our forums!