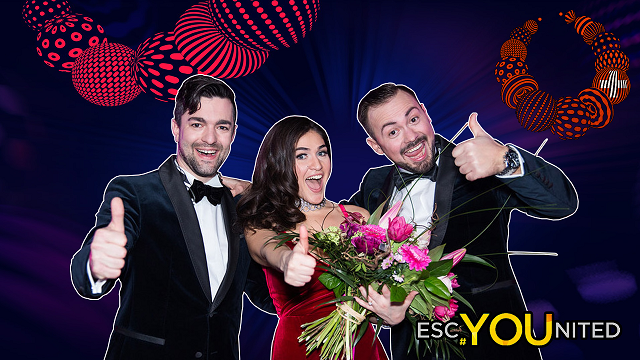 Nenad – 10 Points
This year’s Swiss entry has absolutely amazed me, even at the first listening. Commercial. Melodic. Interesting. I enjoy listening to the song again and again, and never get bored of it. Her voice matches the instrumental perfectly. To be honest, I wouldn’t mind if this goes TOP 10 this year.

David – 8 Points
It was indeed a big loss, when they didn’t win back in 2015, since “Singing About Love” would’ve been a great song back then. Instead let’s focus on the present and the fact, that they won this time. “Apollo“ doesn’t have the same strength as “Singing About Love”, but Miruna delivers such a vocal wonder, and she literally saves the song “Apollo”. The re-vamp of the song also gives the song some extra power, and for me the song and the singer just goes hand-in-hand.

Jordan – 8 Points
One of the best ballads this year. Timebelle has a stunning voice which is complemented by an interesting backbeat. A huge improvement on the original version. I can certainly see Switzerland qualifying and doing well in the final this year.

Stefan – 8 Points
I didn’t like the first version, but anyway I knew that they would win the Swiss NF as their song was the best pick. When the new, updated version was published I started to like the song. I think they have chances to qualify, but they will need a LOT of luck and a perfect performance, something to make them send out.

Sean – 7 Points
While I generally love alternative, indie, rock and most dance music, I am often swayed by the odd pure pop song and for me Switzerland is one of those guilty pleasures in 2017. Immediately catchy, with good vocals and strong charisma from Miruna Manescu, it’s certainly a step up from the last few years of generic Swiss cheese. It’s nothing groundbreaking, but not every song has to be – it’s still an enjoyable three minutes all the same.

Gerry – 7 Points
By far the best song at this year’s Swiss selection, Timebelle deserves a place on the Eurovision stage with its incredibly catchy “Apollo.” It’s got a great beat and a memorable chorus, and the live performance has improved greatly from Die Entscheidungsshow to their guest appearance at Romania’s Selecția Națională. With a polished showing at Kyiv, Switzerland should see its nonqualification streak end this year.

Zack – 6 Points
An ode to the Greek/Roman God of music sounded interesting enough, but the song feels a bit generic and by-the-numbers.  The revamp is a welcome change and it transforms the song into something that is much more Eurovision stage-friendly.  From the touches of electronic notes and the dramatic middle-eight pause, I find myself understanding the appeal of this song listen after listen.

Matt – 6 Points
I wasn’t a big fan of this one until the revamped version was released which a significant improvement. The production value is high and with the right Staging, this could do fairly well. One thing I’m fairly confident predicting: Switzerland will not finish last in the Semis. It’s one of those song where I don’t have much too add, it’s solid but not groundbreaking.

Robert – 4 Points
“Apollo” was one of the first entries to be selected for this year’s contest. I’ll admit, I’ve not really been very impressed by Swiss entries recently, finding them rather bland and just soulless. This, alas, falls into that category once again. There’s nothing wrong with the song per se, it’s just a little dull. The ending is decent enough, but the rest of the song just meanders there without any real passion or interest. I don’t dislike the song, but it fades too much into the background for me. There are a lot of much stronger entries this year with similar themes and I really don’t see how Switzerland will stand out much from the crowd with this. A little more variation would make this a much stronger entry. Maybe next year…

Calvin – 3 Points
This one was spoiled somewhat by its revamp. The chorus feels lighter and more current, sure, but the production is a bad match for the vocal. This is especially evident on “I will never let you go” at the start of the chorus and the repeated “you, Apollo” at the end. The verses sound very professional and clean, but they lack anything to draw me in as a listener. The lyrics, as with the other elements of the song, are cohesive but generic. Overall, it fails to make a lasting impression after the three minutes.