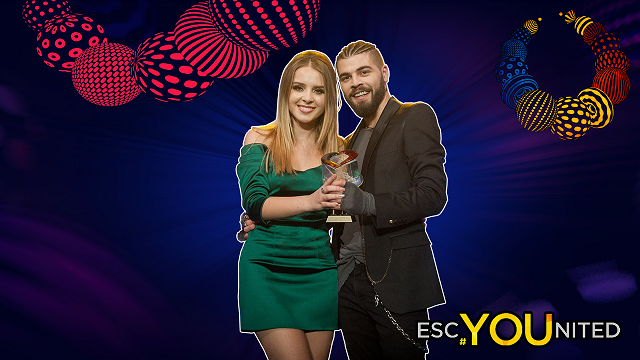 David – 9 Points
I was rather confused when I first heard this song, because I had never heard a mix of rapping and yodeling before, and I’m sure others haven’t either. However, after a few tries, then I felt the joy of this song. When the joy captures you, you’re hooked. The song is unique, no doubt there, and I might be a bit biased here, considering I’m Romanian, but damn, I just love the joy of this song! I might not be as skilled as Alex is, but I wouldn’t mind singing a duet with Ilinca instead haha. I just love seeing those 2 performing the song together.

Zack – 9 Points
Batsh*t crazy, but unlike “Still in Love with You”, the mix of novelty and pop is amazing! The yodeling is used to good effect so that the song stands out and is instantly catchy. But they don’t beat us to death with it.  I honestly feel that solo efforts by these artists would not have been as successful.  But together, Ilinca and Alex Florea ooze the chemistry that so many previous Eurovision duets have lacked.  Further, in a season full of ballads, this will stand out, and not in an Electro Velvet kind of way.

Stefan – 7 Points
Colision of rap and yodeling. Why no one didn’t remember to do it before. 🙂 This will be another hit in the audince next to the stage. It’s not something what I would listen to every day, but for sure it was very, very good!

Nenad – 7 Points
Yodle it! Personally, I can’t stand the song – but I can already see it in Grand Final. This track is very modern. Deeply powerful. Alex, the rapper, is like USA 2020 – a 100% true artist, great performer and singer. The only problem of a song is that they made it very ‘Eurovision’. Ilinca is very charming, but she irritates me with her high-pitched voice . They won’t have my support, but I will not deny their talent.

Romeo – 6 Points
Well.. what can one say about the Romanian entry? Its different to say the least. I was never a fan of this – despite listening to it a lot. I am still trying to decide if its good or just really annoying. It’s a bit all over the place. People will either get it and love it, or just think “wow Romania really don’t care anymore”.

Calvin – 5 Points
Any discussion of this song has to begin and end with an evaluation of the concept: yodel-rap. As an idea, I think this is brilliant. It’s the kind of original combination that keeps me coming back to Eurovision. However, there are some deficiencies in the execution. Instead of camping it up, as such a ridiculous premise demands, the song is a very commercial-sounding ~2010-esque R&B/pop number with a small bit of yodeling and a small bit of rapping attached. This harms the authenticity and creativity of the yodel-rap premise and, ultimately, the package as a whole.

Ferdi – 4 Points
Let’s start with this: it stands out and is pretty different from the “normal” entry. Sadly, that doesn’t always need to be a good thing. This is a mix of a pop instrumental, rap lyrics and yodeling. It feels like the musical equivalent of drinking a smoothie consisting of grapes, mashed potatoes and chocolate ice cream – for me, it just doesn’t blend well. Props to the lady’s yodeling skills, though. Sorry Romania, I hope to be more positive next year!

Sean – 4 Points
Sorry, I just really don’t get the appeal of this. It’s catchy because of the yodelling but it’s marrying two forms of musicality together that don’t really blend all too well. It’s fun and original at least, but i cant take it seriously enough to judge it as a musical triumph. I’m sure after a few beers in Kiev in Euroclub I may change my mind!

Robert – 2 Points
Yodelling may be more traditionally associated with Switzerland, but Romania shows that they don’t have exclusive access to it. Given that this is what they came up with, I rather wish they had left it in the Alps… Yodelling is a nice gimmick and idea to bring to Eurovision, but almost everything else about the songs hurts my ears. I really do not like the voices of either singer except when yodelling, which feels almost as if I have got things the wrong way around! They both seem to struggle with singing the song live, which will be a real problem come May. I worry that the idea is literally “yodelling” with a hastily-added song thrown around it. The ending kind of works to a point, but overall it just falls totally flat for me.

Matt – 2 Points
Yodeling can be pleasant when done right. I was actually fond of the Austrian song from 2005 (look it up if you don’t know or remember what I’m talking about). Romania decided to go down the Gimmicky path trying to be serious about it. I mean the song is called “Yodel it”. We have shouty vocals and screechy female vocals and it’s just silly. I really tried to like it but I just can’t…sorry, not sorry. I’ll give it that though, the last part, the bridge in particular, actually is almost decent but it’s not enough to win me over. I am always looking for a guilty pleasure but this one is only guilty, not pleasant.

Gerry – 1 Point
This song has been way too hyped up by the Eurovision fandom. I just don’t get it. This messy, dissonant number just comes across as amateurish, especially live onstage. Before the national final, I was expecting Ilinca to at least be able to carry the song with her vocals: she’s incredibly talented, definitely one of the best yodelers to grace the Eurovision stage. Sadly, the performance fell flat, which leads me to believe the duo will fail to impress at Kyiv.