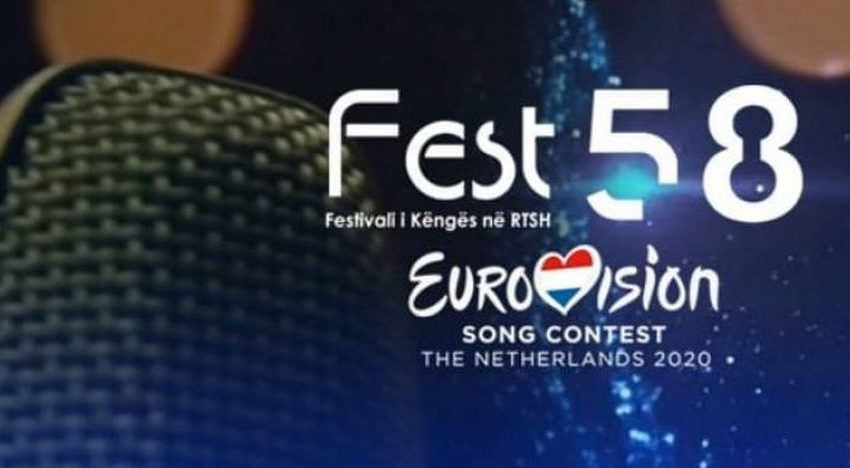 This week finally sees the national selection season leading up to Rotterdam 2020 kick into action, with Albania’s Festivali i Këngës once again beginning our road to the Eurovision Song Contest.

Now, we at escYOUnited are a passionate, opinionated bunch, so we will take the time to review every single main selection entry of the 2020 edition. Where better to start than with the Albanian hopefuls?

For Albania, it is the turn of Boris, Daniel, James, Roy and Sean to deliberate and deliver verdicts on the twenty entrants of FiK 58. Take it away, guys…

Boris – 3 – “This guitar ballad never really goes anywhere and normally I would just slap a 5/10 on it and call it a day were it not that this song somehow lasts for FOUR MINUTES AND THIRTEEN SECONDS? Bore me if you must, but just because I do nothing constructive with my life doesn’t mean I have to spend it on this drawn-out boring trite!”

Daniel – 5 – “I will most certainly concede that it is quite a beautiful song. But the word that I would have to use to describe it is outdated. While I am not a huge fan of throwing that word out, my first thought about this song is as though it is a B track on one of my mom’s favorite CD’s for romantic ballads. This song has an undeniable charm, but not one that I feel will be caught by Europe and will remain a diamond in the rough. Honestly, it does sound like it is from a generation or two ago.”

James – 9 – “A Balkan serenade my grandmother would enjoy. That’s not a slight on this song. In fact, this is quite wonderful, with some wonderful finger picking on the acoustic guitar and some subtle strings accompanying, sung by a crooner straight out of the early 1970s. I Googled Xherahu and he even looks like a former bad boy crooner who is now in his 40s you might see at a steakhouse on a Friday night in Batumi. Zeljko meets Snake Plissken!”

Roy – 4 – “I love that this song immediately transports you to the Balkan. I can definitely see myself enjoying this in the open underneath a nice sunset in beautiful Albania. It makes the experience even more magical. Issue for Devis is that he is trapped inside a building, it is winter, and he needs to fill a big stage and play an audience that is rather far away. I have no doubt that he will be able to deliver this live and could even see it going to the final, but this should have no business close to being the winning song.”

Sean – 5 – “A song about dashuri! There’s been a major lack of it this year… Devis’ entry is pretty and holds much of the mystique that songs like this in a language I don’t understand tend to hold for me, but it’s not my style and not an exception to the rule for me.”

Boris – 8 – “OMG an unapolegetic traveller folk ballad <3 Dino & Beatrice are quaking in their boots. We stan!!”

Daniel – 4 – “Well it is not my favorite duet of the competition. To be very honest, it combines many of the negatives of the other songs, the chorus is quite repetitive, I am not a huge fan of his voice, the guitar while nice makes it feel slightly outdated a la Alejandro Sanz. The song you cannot call it full ethno pop but it does not fill the mantra of a mainstream song. I simply think this song is not my cup of tea. If they have good chemistry on stage then there might be something positive to look forward to.”

James – 6 – “I liked where Fara was going with this until Stresi’s vocals came in. This is another out of time acoustic guitar driven Balkan ballad, but Fara is something of a legend. Why she paired herself with a rapper on a song that needs rap like a fish needs milk is a good question. But this is a mismatch for Stresi, as much as one as EMF and Tammy Wynette.”

Roy – 3 – “I feel like the “rap” in this song is a nice break. It suits the song and it aids the otherwise rather dull female voice to make it stand out a bit more. I think this duo works well, the song is just not interesting at all. I guess you could see this as an earworm, but I wouldn’t take that as a positive in this case. I don’t think this song goes anywhere in the competition. I still don’t mind it, but it just does nothing at all with me.”

Sean – 4 – “I like elements of rap in songs but this just doesn’t do it for me. It’s a very flat song and it would take a spectacular performance to change my mind with this one. I like the local elements but at the same time this makes me think this song is designed more with Albanians in mind than the international audience.”

Boris – 8 – “OMG this flamboyantly homosexual disco anthem <3333 Disco Deen is quaking in his boots. We stan!”

Daniel – 9 – “This is something completely different from what Albania usually does and I almost feel like it is extremely refreshing. This song seems more in line with the recent national finals of the Czech Republic, but its presence in this contest literally adds a fresh melody. The synthesizer is not overdone and the instrumentation still inspires with an exciting composition. It is super fun and entertaining and if done tastefully could be well received in Europe.”

James – 7 – “A fun, funky pop song that could do with the bass cranked up a little bit more. The song has melody and energy as the lyrics advertise, but perhaps needs a bit more heft. To some, “Melodi” may also lack that Albanian distinctiveness that its entries usually have and may sound like an off-cut from Daft Punk’s “Random Access Memories,” but there is a kernel of a decent entry here if they give it a revamp.”

Roy – 6 – “This is fun. It is something to move your body to and it really freshens off the Albanian selection that usually tends to be low energy very often. Should it win? Definitely not. I also don’t think that the judges will go for something like this, especially when there is a dance song that is in nearly every aspect better. I am looking forward to seeing this on the stage since it will probably be a massive party. Good entry in my books, but shouldn’t win!”

Sean – 8 – “Without reading my colleague’s reviews I already have a feeling I’ll be alone with this, but this is funky as hell and I love it! It’s unashamedly a throw-back to simpler times; it feels like a modern Wham! tribute from Albania with love and I’m tapping along in appreciation. I’m eager to see the performance for this track.”

Boris – 7 – “This song is discombobulatingly bizarre and I’m not sure whether it will turn out hilarious/epic, or embarrassing cringe once the transition to FiK is made. Until then, I support my experimental weirdoes!”

Daniel – 5 – “My favorite part about this song is the clarinet. The rest of the song makes me feel a bit awkward. I think it is because it plays against traditional notions of mainstream music. The instruments seem to fit clumsily, the voice itself was nothing out of this world and I shudder to imagine how this will be staged. It really does go from calm to panic so quickly. It is really a hodgepodge that has some really cool ideas, I am not sure that at the moment I currently buy it but the clarinet part should be repurposed because it is just too incredible.”

James – 8 – “I’ve been hard on Lako in the past, but “Malaseen” is an improvement over his past FiK entries. A substantial one. Lako has gone out on a limb here with a thumping bass and brass instrumentation on top of it. Downside is that a sax solo fills in where a memorable chorus could go. Lako’s husky voice shines here, and I do fear that he may not be awarded for bringing an entry that is quite outside the box.”

Roy – 2 – “Woow, the iconic man of Festival i Këngës found some hiphop beats in the attic! He should have stayed away from it though and it doesn’t add much to his incredible voice. The entire arrangement is just really weird. It’s like he just picked a beat to go over his lyrics instead of the other way around. His voice is as always incredible, the song is definitely not. Unfortunate, but I don’t think this is Bojken’s last FiK appearance.”

Sean – 6 – “Poor Bojken, I feel like he has been in every Festivali i Këngës since I have been following it. He brings another interesting composition this year with generous lashings of local flavour and a unique structure, but sadly the song doesn’t build up to anything and there’s no sense of pressure and release. It’s a decent listen for me but nothing remarkable I’m afraid!”

Boris – 7 – “Omg a Denberel-voiced tripster dad <3 This song has a nice jazzy Balkanic vibe to is, much like his spiritual predecessor (Vatja’s “Lejla” – Yugoslavia ’81)”

Daniel – 4 – “I am simply not into this song, the intro with the women was fine but nothing special, but then the rest of the song seems out of place in this contest. In some ways it seems more folksy and lacking the maturity of the other songs. While it does give off a positive vibe, his way of singing made me feel as though it was not meant to be received in a jovial manner. This song has a lot of Serhat vibes without the Serhat personality so I am not very sure for its success.”

James – 5 – “An old fashioned mid-tempo Balkan ballad called “Hers” delivered by an older raspy voiced crooner has its fans, and I know I am one usually. But vibe and vocals aside, the composition is missing something to make this song pop. This is getting lost at FiK 58, I imagine it will get lost in a semi-final in Rotterdam, too.”

Roy – 6 – “This song is the sole reason why everyone should watch the Albanian selection. Songs like this just make you smile and it is something that you don’t hear anywhere else. I am really looking forward to this performance. This is not going to win or go to Eurovision, but I am really happy that something like this is in the selection. It just diversifies the entire list of songs a lot. I don’t really know what more to say, this is just a nice and fun song!”

Sean – 6 – “Now this is a pleasing track with the right amount of local flavour. The raspy, angsty vocals of Kastro Zizo provide a contrast to the upbeat, almost folklike backing of this entry and gives me a easy listening vibe. My concern is where you would cut this down to three minutes without losing any of the vibe this gives off.”

A commanding early lead for Aldo Bardhi, but there are still fifteen songs to survey – find out who the next five are later this evening on escYOUnited!