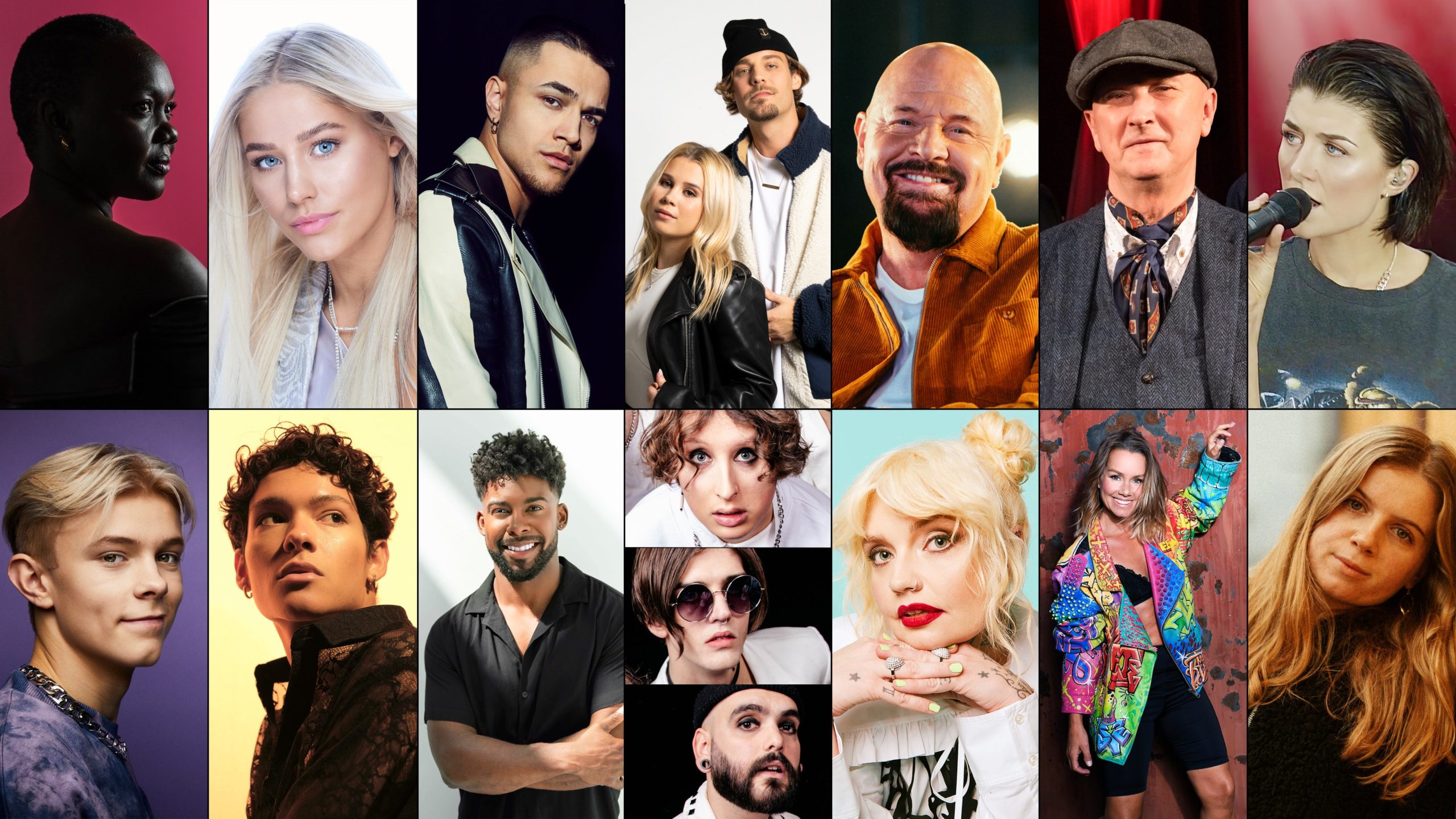 This morning the Swedish broadcaster SVT announced the first handful of artists for one of the most celebrated national selection in Eurovision – Melodifestivalen. Earleir this year, they announced that Oscar Zia would be hosting the contest alongside a roster of guest stars, replicating the format they chose last year with Christer Björkman. They did, however, announce that the Andra Chansen round will be replaced with a fifth semi-final in which the normal Andra Chansen songs will compete in pools rather than head to head duels (two groups of four songs with two winners per group vs. four duels with only four winners).

Let’s take a look at who will join this year’s line-up shall we?

Fans of Melfest will recognize quite a few of these names, as LIAMOO, Klara Hammarström, Lisa Ajax, Omar Rudberg (former FO&O member), Cornelia Jakobs (former member of Love Generation), and John Lundvik are set to make their third appearances in the selection – all of them having competed in the 2019 edition together.

Faith Kakembo is also making a return after winning the P4 Nästa competition in 2019 and guaranteeing her a slot in Melfest 2020. She placed fifth in the third semi-final that year. A name that is no stranger to anyone in the Melfest circle, Linda Bengtzing will be returning for her eighth appearance in Melfest.

We also see numerous artists making their Melfest debut, which makes for an exciting and unpredictable year.

Anders Bagge was a featured judge on the Swedish Idol series from 2008-2011 and 2013, and has written for artists such as Janet Jackson, Westlife, Celine Dion, Jennifer Lopez, Enrique Iglesias and more. He also produced Safura Alizadeh’s song “Drip Drop” for Azerbaijan in the 2010 contest and Sabina Babayeva’s song “When the Music Dies” for the 2012 contest. He recently performed on the swedish edition of The Masked Singer.

Danne Stråhed is a revue artist who has been performing since he was sixteen years old, and has been a member of The Chinox, Änglabarn, and Wizex. He left the band in 1996 to pursue a solo career, and also runs a dance palace named the Dannero.

Cazzi Opeia is a singer, songwriter, and DJ from southern Sweden, and gets her name from the star constellation Cassiopeia. Her first hit came with the song “I Belong to You”, which DJ Tiësto remixed for his Club Life record and launched her onto a global platform. She has writen for a variety of artists such as herself, KPOP groups Twice, Red Velvet, NCT Dream, TXT, Itzy, and BTS.

Samira is a 21 year old Swedish-British artist who is inspired musically by Tracy Chapman, Julia Michaels, and Maisie Peters. She puts priority on being able to use her music to convey the feelings and opinions she has in an honest way, and her single “Friend of Mine” is actually about a friend struggling with being lonely and how to talk about those feelings. She is signed to Cardiac Records.

Theoz is a Swedish TikTok star and YouTube influencer who also focuses on music. He received a record deal with Warner Music at the age of 12, and in 2018 the video for his song “Het” was the most watched Swedish music video on YouTube within the country. He releases music in both English and Swedish, opting for the latter in Melfest this year.

This indie rock group is described as “your favorite bubblegum emo boyband and their song is part of their upcoming debut record. There was also referrence to “screeching” in their announcement post on Facebook, which could be a hint at what their song may sound like. It is noted that the band wrote their entry on their own.

Niello is a Swedish rapper and hip hop artist also known as Niklas Grahn, and will make his debut alongside Lisa Ajax. He initially rose to fame in 2013 with his single “Legenden” featuring Phantomen – which has gone double platinum in Sweden. He is signed to Song Music Sweden, and released his first full album “Dahlia” in 2019.

SVT announced that the next slate of artists will be announced “soon” – likely in the coming weeks. Until then we will have to wait patiently!

What do #YOU think of this roster of artists? Do #YOU have a favorite already? Let us know your thoughts on social media @ESCUnited or on our forum page!