Home Breaking News Something inside so strong: An Anti-Apartheid legend tries out for Eurovision 1978 (Twice) 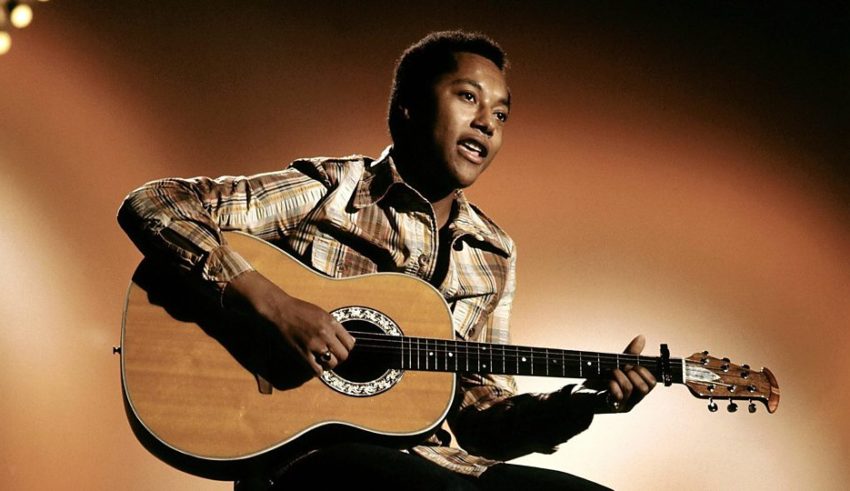 As the Eurovision 2020 national selections begin to ramp up, we are going to look at some iconic pop culture figures who tried out for Eurovision but did not make it, but who ended up becoming legends anyway.

Last season we looked at a Finnish band that practically invented symphonic metal, the charismatic lead singer of the Soviet Union’s answer to the New Romantics, the songwriting legend who wrote an anthem for Europe’s most intense soccer fanbase, and the voice of “Troy” and “Passion of the Christ,” among others.

And today we’re going to look at Labi Siffre, the singer and writer of one of the most powerful anthems against the Apartheid regime of South Africa, and the entry he performed for A Song for Europe 1978 and the song he wrote for another artist that same year.

Born Claudius Afolabi Siffre on June 25, 1945, in Hammersmith, London, to a Barbadian-Belgian mother and a Nigerian father, Siffre was raised primarily in West London and attended St. Benedict’s School in Ealing, a Catholic school where Chris Patten, the last British governor of Hong Kong, was head boy at the time of Siffre’s attendance.

During school, Siffre picked up the guitar and immersed himself in his brother Kole’s expansive record collection, including the greats of rock ‘n roll such as Little Richard as well as jazz titans Ella Fitzgerald, Count Basie, and Miles Davis. In 1964, Siffre got his first paying gig being part of the house band at jazz singer Annie Ross’s newly opened club in Soho.

As he told “New Humanist” magazine in 2012, “[Annie’s Room] was my first “status” gig; Bob Stuckey (leader on Hammond B3 organ), Woody Martin (drums) and me on electric guitar trying to be Wes Montgomery. We were the second house band and fortunate to see, hear and meet, among others, Mose Allison, Betty Carter and Joe Williams.”

It is also around this time in 1964 that Siffre met the love of his life Peter John Carver Lloyd. When the United Kingdom reformed civil partnerships to include homosexual couples in 2005, Siffre and Lloyd were among the first gay couples to enter formal civil partnerships. Their love endured a total of 48 years until Lloyd’s passing in 2013.

As Siffre embarked on his music career, Siffre faced two different headwinds as a gay black performer. As a black musician, he felt the British music industry of the time expected a certain “ethnic” sound from him. As he told New Humanist, “The insistence that one should be “ethnic” is endemic, irritating and insulting.”

Similarly, being homosexual, he felt there was a similar insistence to be “camp.” That in order to succeed, an artist should perform in a certain manner. “Heterosexuals in general are comforted by thinking they can tell if someone is gay, or not,” he told New Humanist. “In order to support that delusion they insist that gay characters be presented to them (the majority audience) in a way that they, in their arrogance, will accept as gay. Primarily this means camp (or being a depraved killer who loves opera or strokes his cat in a sinister way). In that regard little has changed.”

Siffre’s self-titled debut album was released in 1970, followed by “The Singer and the Song” in 1971. But it is with his 1972 album, “Crying, Laughing, Loving, Lying” that Siffre began to enjoy mainstream success.

The album’s title track reached Number 11 in 1972, but it was the sweet acoustic “It Must be Love” that hit Number 4 on the United Kingdom Singles Charts in 1972.

Americans are probably more familiar with the cover of “It Must be Love” performed by British ska-punk band Madness. This version also hit Number 4 in the United Kingdom, but also charted in the United States, hitting Number 33 on the Billboard Hot 100. In the cover song’s video (see below), you can see Siffre in a cameo appearance as a violinist.

Madness re-released “It Must be Love” in the United Kingdom in 1992, this time reaching Number 6 on the UK Singles Chart.

Covering or sampling Siffre has led to success for many artists. Olivia Newton-John covered Siffre shortly after her 4th place finish at Eurovision 1974, releasing “Crying, Laughing, Loving, Lying” in 1975 on her album “Clearly Love.”

She returned the favor when she hit the big time in 1978 with her appearance in the smash hit musical “Grease.” In 1978, she took Siffre on tour with her and performed “Grease’s” biggest hit, “You’re the one that I want,” in a duet with him.

Sticking to Eurovision artists who covered Siffre, Lyn Paul from Eurovision 1972 runners-up The New Seekers (“Beg, Steal, or Borrow“) did a version of “It Must be Love” in 1975 on her solo album “Give Me Love.”

And in 1978, Siffre decided he was going to try out for Eurovision 1978 himself. Twice. Once as both singer and song-writer, and writing another track for a musician friend of his.

Siffre entered the BBC’s A Song for Europe 1978 to find the United Kingdom’s representative for Eurovision 1978, and it was something of an eclectic national selection. More so than usual, with modernity finally starting to seep in with a punk song (The Fruit-Eating Bears’s “Door in my Face“) and disco (Midnight’s “Don’t Bother to Knock“).

The other entry was for Bob James, who Terry Wogan introduced as Bob James from Warwickshire, with the Siffre written “We got it bad.” I mention “from Warwickshire” only as it is hard to find information on this particular Bob James, mostly because Google results tend to return in droves the Bob James who replaced Sammy Hagar in the classic rock band Montrose in 1973. A Timothy James who says he is his son drops comments on every YouTube clip for “We got it bad,” and Timothy, if you are indeed his son, drop us a line, as we’d genuinely love to know how Bob James ended up singing a Labi Siffre song at A Song for Europe and what he’s been up to since then.

For A Song for Europe 1978, fourteen regional juries assigned scores to twelve acts, with each jury awarding points based on Eurovision scores (i.e. 12 points for 1st, 10 points for 2nd) and the scores being revealed like at Eurovision 1978. It was, with 13.7 million viewers, the best viewership for A Song for Europe ever, though 1978 was unusual in that the United Kingdom was for once not afflicted by labor strikes or power outages that plagued the British during the 1970s.

Performing last on the evening of A Song for Europe 1978, Siffre’s “Solid Love” finished fifth. Unfortunately for James, “We got it bad” finished 10th in the field of 12 entries.

Co-Co singer Cheryl Baker was to have her revenge, though – Baker was part of Bucks Fizz who won Eurovision 1981 with “Making Your Mind Up.”

Siffre took time out from his music career after this to focus on his other love – writing. Siffre published several books of poetry, essays, and plays. However, Siffre watched a BBC documentary on the Apartheid regime of South Africa in 1985, and was moved to action. (The Apartheid regime being the white supremacist authoritarian regime that ruled with brutally enforced segregationist policies in South Africa since independence from the United Kingdom in 1961, though the first formalized policies started coming out in 1948 under the National Party.)

This particular documentary started with several township demonstrations in 1984, with one in the Khayelitsha township outside of Cape Town being brutally put down by South African Police. Siffre saw resilience in the crowds as they continued to protest, despite ever-escalating beat downs and shootings from the militarized police force who in 1984 responded with widespread curfews on black South Africans and encouraged vigilante apprehensions of anyone caught breaking the curfew.

And “(Something Inside) So Strong” marked Siffre’s return to music after an almost decade long absence, and it became the joint-best hit of his career, with the single hitting Number 4 on the UK single’s chart in 1987.

The music video clearly evokes Nelson Mandela’s prison cell (even down to the limestone) at Robben Island. As Siffre has leaned more to the inspirational side in his music, he took the same approach with “(Something Inside) So Strong,” making it a personal anthem and putting himself in the position of the oppressed in South Africa and channeling his inner strength to fight back against ever-increasing levels of oppression and violence.

This makes it a much more memorable, personal and effective song than other songs of the era, such as Artists Against Apartheid’s “Sun City,” which was Steven Van Zandt’s (Bruce Springsteen’s guitarist and Silvio Dante in the HBO series “The Sopranos”) all-star American musician protest song against the Apartheid regime and musicians who regularly accepted invites from the South African resort of Sun City in the “independent” Bophuthatswana, a carved out “homeland.” Siffre’s song pulled you right in, and anyone with an ounce of empathy is immediately distraught. If you feel dread of something like this happening to you, you feel compelled to do something to help others in that position. And it was that empathy that Siffree banked on, and being an optimist he calculated correctly as many people turned on Apartheid South Africa.

And for anyone alive at the time, the late ’80s and ’90s seemed glorious as not only did Apartheid fall (Nelson Mandela’s release in 1990, followed by a rapid dismantling of the Apartheid policies from housing to school segregation led to the first multiracial elections in South African history in 1994), but the totalitarian communist regimes in Eastern Europe fell as well.

Siffre also told BBC’s Soul Music in a 2014 interview that “(Something Inside) So Strong” was also a reference to his homosexuality and how he and Lloyd dealt with the discrimination they faced. He also said he had intended to give the song to another artist to record, but due to the personal connection to the song and not finding a suitable artist, he decided to record it himself.

None other than Kenny Rogers had a minor hit with a cover of “(Something Inside) So Strong” in 1989. This version appears to have struck a chord with Kenyans, so if anyone out there knows the context of that and why Rogers’s version over the original, please do let us know. And in a tribute to American civil rights activist Rosa Parks, a group of gospel singers performed the song as a track on a tribute album.

A sample from “I Got The…” was used in Eminem’s “My Name Is,” the lead single from his debut album “The Slim Shady LP.” Siffre told publications that he objected to the sample being used in “My Name Is” due to Eminem and the song’s producer Dr. Dre repeatedly dissing victims of bigotry, particularly women and homosexuals (and the language Dr. Dre and Eminem used for them).

So as we honor Dr. Martin Luther King here in the United States, today is also time to reflect on a powerful voice who performed an inspirational anthem against the South African regime. And because of performers like Siffre, inspired by the likes of Dr. King and Mandela, who stood out and championed a world free of racism and homophobia, the world is a better place in 2020 than it was in 1987.

Do #YOU think “Solid Love” would have done better at Eurovision 1978? Do #YOU think that “(Something Inside) So Strong” is an underrated classic that deserves more praise? Let us know in the comments below, on social media, or in our forum.