Home 2019 Russia: Tatyana Mezhentseva and Oorzhak Denberel to perform “A Time for Us” at Junior Eurovision 2019! 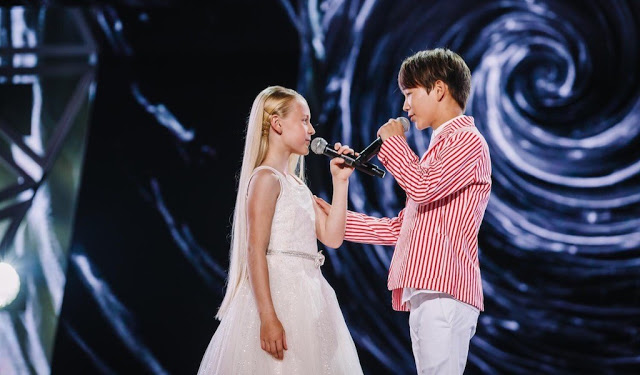 Carousel TV announced that Tatyana Mezhentseva and Oorzhak Denberel have handily won the Russian national selection final, and that they will go on to Gliwice, Poland, to perform “A Time for Us” at Junior Eurovision 2019.

12-year-old Denberel, from Kyzyl in the Far Eastern Russian republic of Tuva, will join 9-year-old Mezhentseva on November 24, 2019 after their crushing lead in the online polls and joint-first and second place finishes in the kids jury and adult jury, respectively.

The national final was held this evening in Moscow, and though the results are already known, the national final is available to watch on the evening of Thursday, September 26, 2019, on Carousel TV (available on DirecTV packages in North America).

Online polling for the national selection opened on September 17, 2019, with eleven acts (nine solo artists, one group, and one duet) for Junior Eurovision fans to vote for. Denberel and Mezhentseva ran away with an early lead, with only runner-up Daniel Khachaturov coming within touching distance. Nikita Muroz came in third with “Nikita and Friends.”

Denberel also had the benefit of name recognition, as he has become a popular youth entertainer in Russia over the past few years, aided by his distinctive husky voice, a throat-singing style popular in Tuva and neighboring Mongolia.

Maria Morova, who overall finished a lowly 9th, won the kids’ jury with “Way to Dream.” She was joint second with the adult jury, but Morova’s song did not connect with the online voters, coming in 10th there.

Margarita Stryukova won the adult jury vote, though came in joint third with the kids’ jury and came in fifth in online polling.

What do #YOU think of Russia’s choice at Junior Eurovision 2019? Will Denberel and Mezhentseva restore Russia’s place at the top, or could this be a first-time bottom half finish? Let us know in the comments below, in our forum, or on social media.