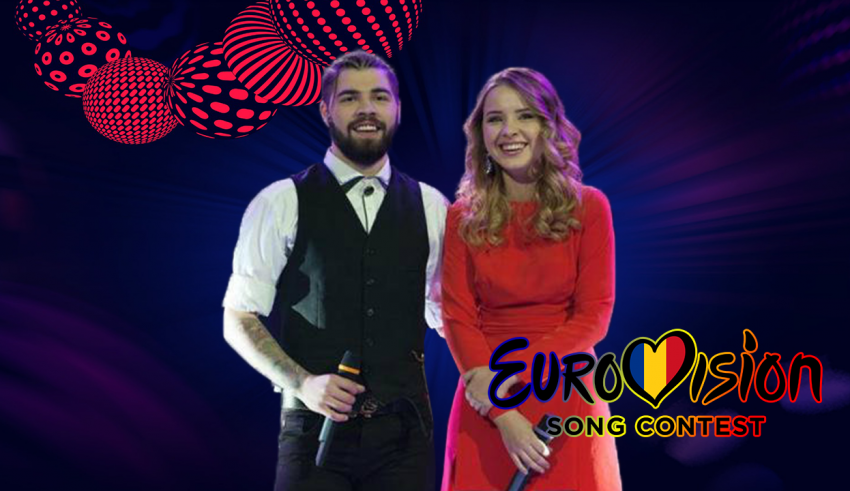 Bună seara România! – They were kicked out, just days away from the Eurovision 2016 would start, but after the incident last year, they still show a lot of spirit for the Eurovision Song Contest. Romania has made their decision, and Ilinca & Alex will represent Romania in Kyiv.

From the opening of the show, you can easily tell, that Romania still has a great spirit for the Eurovision Song Contest. The show opened with a nice drum and dance show, and of course with all the 10 finalists on stage, to sing together, a great Eurovision medley, from past editions of the contest.

All the artists were given a chance to talk to the public after their performance, and of course given a chance to ask for votes. However, friends and family to all the participants who gave the artist a helping hand, by asking the public to vote. Tonight’s winner is solely decided by the public, which means that it’s a 100% televote. No jury was included during the show.

Switzerland – Tonight’s show was not only about the 10 competing acts, a few invites were sent out, and so a few European acts were also invited to the Romanian final. Timebelle, who will represent Switzerland in Kyiv attended the show, and also performed their song “Apollo”. Obviously the Swiss were invited to sing and promote their song at the show, since the current trio in Timebelle consists of 2 Romanians. Miruna Manescu who is the front singer for Timebelle, is one of the Romanians. It’s also a perfect time to mention, that Switzerland will compete in the same semi-final as Romania, so they are counting on each other!

After a small commercial break, then we finally reached the point that counts. Finally the voting lines were opened, and people could finally vote for their favorites. It has to be said, that it was only possible for the Romanians to vote once from each phone. This means of course, when you’d voted, you’re done, but one can only wonder, if the exclusive price was a reason for Romanians to vote. A random voter would actually win a car from one of the sponsors of the national final.

The voting would last for a entire amount of 60 minutes. There we could as well prepare ourselves to enjoy the rest of the show, until the lines were closed. However, we managed to snatch this screenshot, and the hot favorites to win Ilinca & Alex, immediately claimed the top spot of the voting.

To mention our poll as well, according to the poll we ran on our website, where you guys could vote for your favorite act in the Romanian final, then we can see it was a close call between 2 songs, and even a third song being among the favorites.

The poll ran since last week, after the Romanian finalists were announced, and was closed just a bit before the show started. This is the results from our poll:

While the televoting was still going in the background, the tribute band Arrival gave the viewers and the audience some Swedish vibes. They are a ABBA tribute band, and they indeed performed multiple ABBA hits as well.

The ABBA tribute lasted a total of 45 minutes, and this was during the televote was open, so afterwards there were only 15 minutes left, and this is when the tension seriously grew on the 10 acts of tonight.

Moldova – The ABBA tribute couldn’t last forever, so it was time for some else to get on stage, while the voting time was running in the background. Another obvious guest of the show, were the boys from Moldova, who together are known as Sunstroke Project. They also got a chance to perform for the Romanian audience and viewers with their Eurovision song “Hey Mamma!”. Moldova is obviously the brother country of Romania, having a past together, and as we know, they always vote each other when they can at Eurovision, so it was obvious that Moldova would make a guest appearance.

Spain – With only minutes left before the lines would close, there was just time enough, for 1 last guest performance. Tonight’s last guest was the Spanish artist Manel Navarro, who despite the controversial national final in Spain, will represent Spain in the Grand Final of the Eurovision Song Contest. Spain is considered a huge contribution to Romania at the Eurovision, as Romania normally tends to gain points from Spain. Manel performed his Eurovision song “Do It For Your Lover”.

Despite the early lead for Ilinca & Alex, then the Romanians wanted to create some tensions, and make it more exciting. Instead of just announcing the winner. The hosts called the Top 3 to come on stage, in a random order.

The top 3 in a random order, that were announced to come on stage:

To make it even more exciting, the announcements on the stage, would start with who finished on 3rd place. The 3rd place went to… Instinct

Making it a final battle between Ilinca & Alex and MIHAI. The name that was announced, and the ones who would represent Romania at the Eurovision Song Contest… Ilinca & Alex Florea!

The duo was announced as the major favorites to claim the winning price, since the very beginning, and they did indeed manage to claim the main price. They will now represent Romania at the Eurovision Song Contest in Kyiv. Romania will participate in the second semi-final.